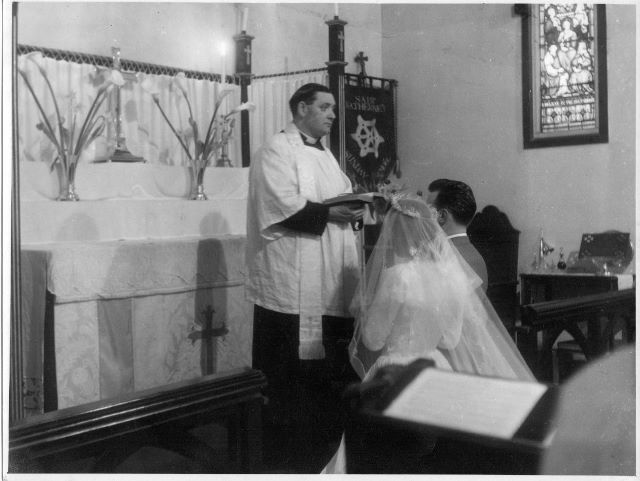 Joan Freimuller nee Lazell grew up on Northwick Farm. She lived with her family in one of the two Monkswick cottages. These were owned by Mr Leach. Joan’s father  who worked for the government as a farm manager, farmed Northwick and Westwick. The family, on the Island since 1901, had moved there in 1941 and moved away in 1955 so they were there in the 1953 flood. Joan’s father woke up in the night and looked out of the window. He thought it had been snowing because all he could see was white. He then realised that it wasn’t snow but froth on water and then he knew the Island was being flooded. He told of how the sea water had moved the farm’s dung heap from one field to another. After the flood waters receded and the sea walls were repaired, gypsum was was put on the land to make it usable again for farming.

During WW2 there were German prisoners of war who helped on the farm. Joan remembers that they made a toy for her and her sister. There were also Land Army girls working on the farm.

Not far from where Joan and her family lived there was Odell’s where waste clinker from the Beckton and Bromley gas works was dumped. It wasn’t fenced off even though it was quite dangerous and so children would play there. Eventually it became packed down and solid.

Joan’s mother worked in the Red Cow, now the King Canute, where she lived in. She then worked at Kynoch’s as a waitress and chamber maid and lived in a flat above Nash’s shop in the Village. In 1948 when Joan was 15 she worked at Glanfields in Benfleet as a machinist and the at Egans on Canvey. Before Egans was built at Charfleets it had been a cricket field. Now Camping and General occupies the site.

With a couple of friends Joan used to go to the dance school in Fairlop Avenue which was 2 bungalows joined together. It was here she met her future husband. She was married by Rev. Cullen to John Freimuller in 1955 in St Katherine’s church (see photo).

Near to Northwick Farm was an army camp which housed American soldiers. Joan thinks now that they were preparing for D-Day. She used to sit in a plum tree and watch the soldiers go to roll call. Her father would sometimes take her with him when he delivered milk with a pony and trap to the camp. At the guard hut the soldiers would give her chocolate, a real treat when rationing was on. Some of the American soldiers would also come and sit in the farm kitchen and talk about families back home. There was also an occasion when they were having a bit too much of a good time in the Haystack pub so that the Red Caps had to come and haul them out and put them on lorries back to the camp. After the war the camp was used as temporary housing and during the flood Joan’s father rescued people from there.

Joan’s father-in-law had a florist’s in the town centre in Furtherwick Road. Her husband took it over and ran it with his mother when Tina, the trained florist left to pursue her career. The shop was near the junction with Lionel Road and Furtherwick Road in a parade of shops including Alf Harleys men’s outfitters. All the shops were separate and some like Alf Harleys were flat-roofed.

John’s grandfather owned ‘Andromeda’ which was situated at the back of the Convent. John was in the Air Force and when home he played drums for a band in the Bay Country Club.

One of the other well-known shops was Cockell Jacks opposite the Haystack. He was also a special constable who would sign the paperwork regarding the cows at the Lazell’s farm. If Joan’s father had more milk than he could sell he would have to pour it away. He wasn’t allowed to give it away.