My grandmother, Freda Gordon nee Tozeland, who died in 2007, wrote her life story which involved many trials throughout her life. Born in 1918, she was 6 years old when her father took the family to Canvey Island. Below I have included an extract from her life of the time spent in Canvey.

Any help from local historians on the house “Bersalem” which I believe was in Leigh Beck or the local school, or anything that would help me understand this period of her life better would be appreciated… 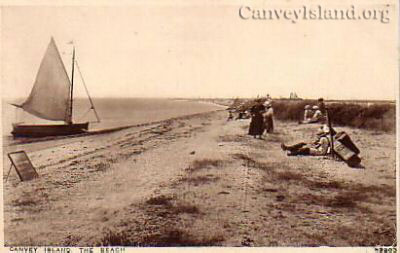 The first time I really remember my Father was when he took us across the water to Canvey Island . There was no bridge in those days and we had to wait till the tide was very low so that my Father could drive us over. We had almost no possessions, so we were all able to fit into his wee Morris Cowley; three of us in the dicky and Father with Mother and baby in the front. I often wondered why we were found homes that were so remote from people, at least from that time onwards anyway. Canvey in those days of 1924 was sparsely populated and we certainly had no near neighbours. My Father, some years later I understand, told Mother it was healthier to bring children up, either by the sea, or away from towns. Mother and I, some years later, decided it was simply to suit his own purposes.

Our new location was a wooden bungalow on stilts and consisted of four rooms in a row built lengthwise. It was named Ber-Salem. This was overall quite a pleasant time for me. We loved the beach at Canvey; it’s funny as I only ever remember it being summertime there.

For the first time Norman and I went to school, which I really enjoyed even at such a young age but Norman always seemed to cry when he had to go. It was quite a long walk for us to get to school and the distance is all I can remember about it now. As I look back I realise I never had enough of this “happiest time of my life” as it has been called. I used to get settled, then on we would move. This was one of thirteen schools I attended between the ages of six and fourteen years old.

Whilst there another daughter was born to my Mother, in 1925, but she only lived to be six months old before she succumbed to bronchitis. I can see my Mother taking me into the room where the young Daphne was lying in her coffin and showing me her little dead form. We were not old enough to mourn her death and we can now look back and see how gracious our Heavenly Father was to take her Home so soon.

Whilst still at this location, Derek still only eighteen months had an accident which I caused. He was a fretful baby, he seemed to have bad digestion and some foods brought him out in a rash and he used to cry a great deal. One day when Mother was outside, Derek was crying so much that I picked him up hoping to quieten him. I found him heavier than I thought and dropped him on to the stove, which had a hot shelf where we sometimes heated a kettle. Fortunately at this particular time the kettle was elsewhere, but the shelf was still hot enough to injure Derek, my Mother soon came in and managed to pacify the baby. She knew I’d dropped him but did not realise he had been so harmed until a little while later he started screaming and when he was undressed his back was badly blistered. Poor little chap it seems that the so called help of a seven year old sister wasn’t really appreciated. 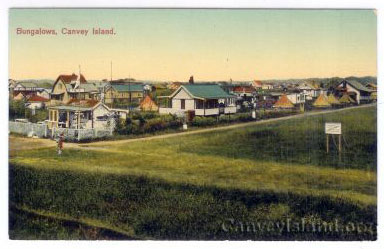 When my brother Derek and his wife came to see me in 1993, he was then seventy, and I was told that his back is still seared from the burns I inflicted on him all those years ago. I admit that it wasn’t pleasant being reminded of this. My good intentions must have caused that baby boy a great deal of suffering.

Whilst in Canvey we were fed with cod liver oil and malt when it was available. One day, Joyce was running around sucking a teaspoonful of this when she tripped and fell. The Doctor told Mother that the spoon had caused a wound in the roof of her mouth and if it had gone any further it could have pierced her brain. I’m not sure if this was exactly the case or if he was warning us to avoid another similar accident. These were not very pleasant memories of Canvey Island, but we did learn a few hard lessons whilst there.

Apart from the death of our sister Daphne, which at the time did not seem too awful to us, Derek’s accident was the most significant thing that occurred on Canvey Island. We seldom, if ever, saw our Father after moving there.

I was very happy at Canvey, too young to understand the many problems my Mother must have had, for we were in furnished accommodation, as always, but we never seemed to have enough food or clothing. I often wonder how she managed to feed us all.

One day a parcel of clothes came whilst we were still on the Island containing many useful items which Mother cut up and made into things for us. Two of these I remember well. One was a suit which Mother made into a jacket and knickers for Norman. She has referred to this on several occasions since that time, for she was a fine needlewoman. The other was a ladies hand knitted garment in blue and grey which she unpicked and made into a dress for me. I was proud of this because the skirt to my eyes was lovely, knitted in feather pattern which gave a scalloped edge.

Mother must have had so many worries and no one to share her problems with. I was too young to be of any real support to her.

As I have said we children hardly knew our Father but we conceived a vision of a man who kept us very short of the necessities of life causing our Mother much anxiety and suffering and hardship. We occasionally got a cheque from him which almost always bounced and forced Mother to beg for credit from tradesmen, for the sake of us children. Each time we moved house we had absolutely nothing to take with us, just the clothes on our backs. If we had managed to get anything together, this was claimed in lieu of rent by the owners of the bungalows or furnished houses which my Father had found for us to live in.

I was now getting used to a wondering childhood, for, by the time I was six we prepared to move into my sixth different home…