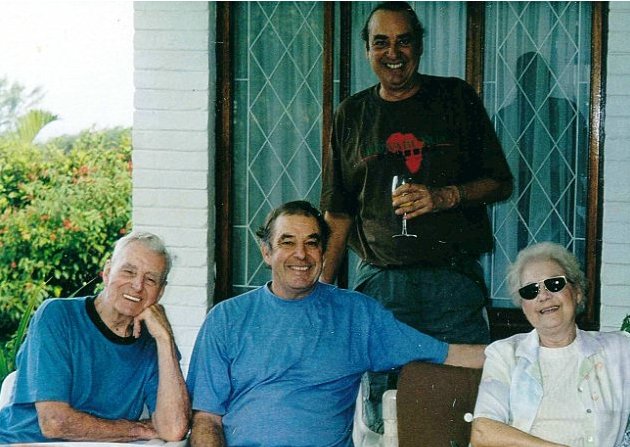 Leslie Brodrick with (left to right) sons Duke and Roy, and wife Theresa

Sometime in 1930 we moved from London to Canvey Island. My father George Nash purchased the holiday bungalow ‘Chesterfield’ on Holbeck Road. There were no tarred roads, just mud tracks and we had to cross over a wooden bridge over a stream to get from the bungalow to the corner shop on Sea View Road.

I attended Long Road School, taking the school bus from the top of Baardwyk Avenue. The headmaster was a Mister Read. When I left school I worked as manageress at the Bata Shoe Store at Lakeside Corner, near the Rio Cinema. The shop closed soon after the  war broke out.

I met Leslie Charles James Brodrick when he was stationed on Canvey with the Surrey Yeomanry. He was on searchlight duty based  near the Casino, Les transferred to the RAF and trained as a pilot near Dallas Texas, in the United States.

I was drafted to do war work, testing tank engines, in Wolverhampton This is where we married when Les returned to England. He was by now a bomber pilot, piloting a Lancaster in 106 Squadron. I became pregnant and returned to Canvey where my first son Duke Raymond was Born on August the 8th 1943.

My husband was shot down while returning from a raid on Stuttgart, he was imprisoned at Stalagluft 3, from where he took part in The Great Escape. We were reunited at the end of the war and lived at “Ashford’ Holbeck road. Les went up to London University to train as a teacher returning to Canvey to teach at Leigh Beck School where he taught from March 1947 to April 1955. 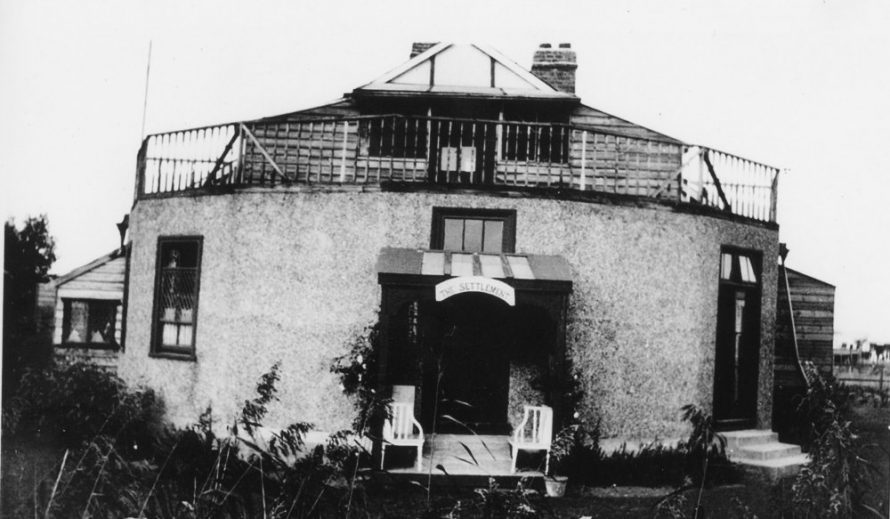 Our second son, Roy, was born in 1946 at Romford Hospital. We then moved to ‘The Settlement” situated on the corner of Main Road and Baadwyk Avenue, owned, I think by a Miss Stevens of the bakery. Steven’s Bakery was situated on Main Road opposite the junction of Seaview Road.

My father passed away and my mother, Edith Emily Nash stayed on at “Chesterfield” and my grandmother Emily Edith Lambert moved from London to live with her. They were both staunch members of the Baptist Church which was a short walk from the bungalow.

We all enjoyed a good life on Canvey, at that time all fields, farms, creeks and mostly un-tarred roads, and with the post war rationing in force we were glad of the plentiful rabbits, mushrooms, blackberries and the fish from the bay. We spent many pleasant summertime hours on the small shingle beaches .

We had bought the house ‘Leamington’ on Matlock Road near Jones’ Store and the police station, just around the corner from Long Road school. 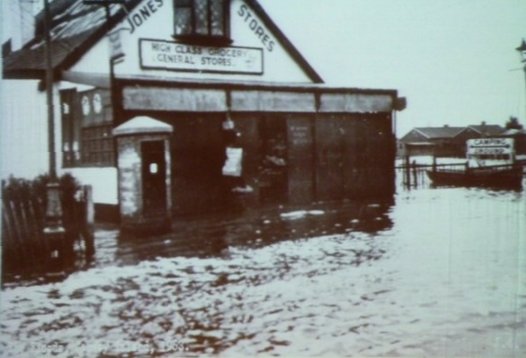 Then came the dreadful night of  31st of January 1953 and the flood.

We were awakened a 2.30am by a hammering on the front door. It was the local police constable who gave us the news that the Island would be flooded at the next high tide which was in 3 or 4 hours time.

It seemed an ordinary night, the sky was clear, the moon shone, there was nothing to indicate the horror which was about to engulf the Island, but Bill was adamant. Pack everything you can carry and get the children to the mainland.

As I packed everything we could carry, Les took everything that he could fit into the loft space but the furniture had to remain in place.

I could not believe this was really happening  and was not looking forward to taking the children on the 6 mile walk to Benfleet along the main road.

I awoke and dressed the children with as many layers of clothes as I could as it was freezing cold outside. All the time I was constantly worrying about my mother and grandmother at the other end of the Island.

The boys were so good though I’m sure that they did not really know what was happening, to them it must have seemed like a bad dream. Anyway at last we were on our way. We had ‘Rusty’ our cocker spaniel on a lead but could not find ‘Ginger’ our cat anywhere.

Thank goodness the boys were used to long walks. When we reached The Red Cow, a popular public house, more people joined us, and then more at Northwyke corner, The farmland to the north east of us were already flooded cutting off the short cut past the lake, this meant that we had to take the long way round remaining on the main road.

The road was full of people, leaving their homes behind, struggling with luggage and young children. We walked past farms with cattle still in the fields, and all the time there was an eerie silence broken only by the occasional wailing of a baby. No one spoke,  their thoughts I’m sure like mine, wondering what lay ahead and what we were leaving behind.

Strangely there was no traffic on the road and the walk seemed endless eventually we were on the last stretch of road through farmlands to the bridge across the creek separating us from Benfleet, and at last, the mainland.

We climbed the steps over the railway line and looked back at Canvey visible in the first grey tinge of morning light, our Island, our home awaiting the devastation of the worst flood ever.

Luckily we had friends in Westcliff, a teacher with whom Les worked. My elder son Duke and I stayed with them while Les took Roy up to London to stay with his parents.

My mother and Grandmother were rescued by boat, the water had risen well above the garden fence.

Les and all able bodied men were asked to return to the island to help with the clean up.

Practically everything in the house was ruined, having been covered with over three foot of sea water. The garden was strewn with worms and many other nameless creatures killed by the salt.

Eventually a drying machine was provided to the worst hit houses but the sea water never really dried out and the walls always had damp patches and a smell. The house was never again the cosy place it had always been before the flood. 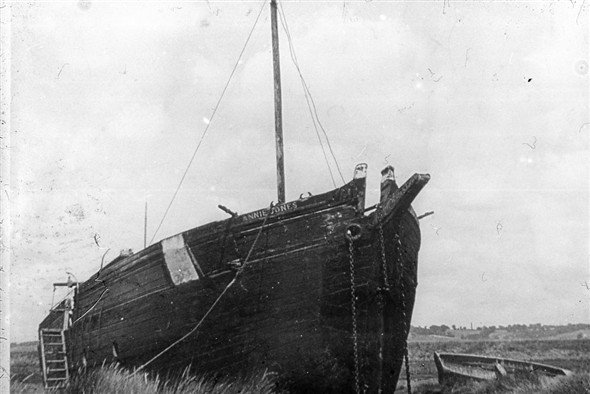 However I still have many happy memories of Canvey. Small Gains Creek is one, when the tide was out one could walk across the mudflats to the seawall opposite. In summer these flats were covered with sea lavender, beautiful masses of mauve flowers. An old barge wreck which had apparently run aground in the distant past. We would cycle down the old road, opposite the King Canute, past the round Dutch cottage to the Smugglers Inn, blackberry bushes grew rampantly at the sides of the road. The small lake at lakeside corner would freeze over in winter, much to the delight of the children. 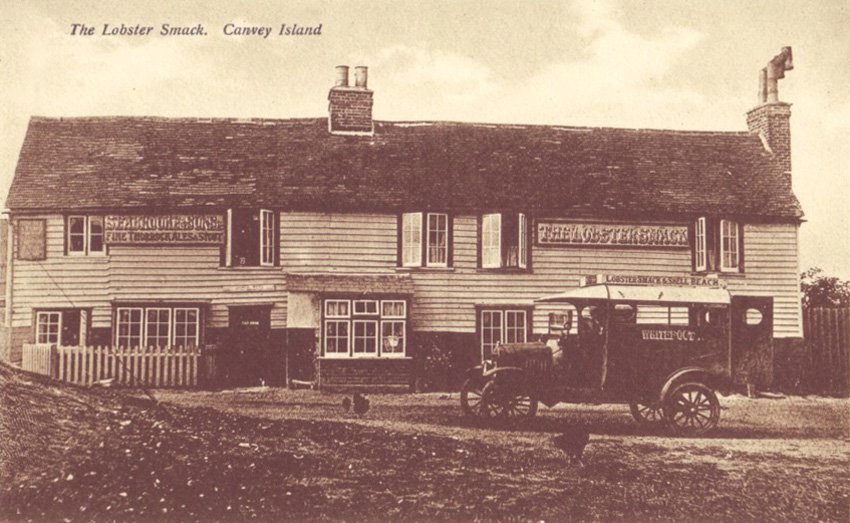 Somehow Canvey Island was never the same after the flood and when an opportunity arose we decided to emigrate to South Africa where my mother later joined us.

I still think often of those carefree joyful times, and often wonder what is Canvey like today.