Listening to the Sky Larks

I came to Canvey Island at the age of eight from the east end of London to escape the smog and lived in a bungalow called ‘The Cabin’ in May Avenue. I had belonged to the brownies in London and was the first one in the new pack started by Phyllis Owen. I had a long association with Phyllis and she gave me a copy of her first poetry book called Multum in Parvo. 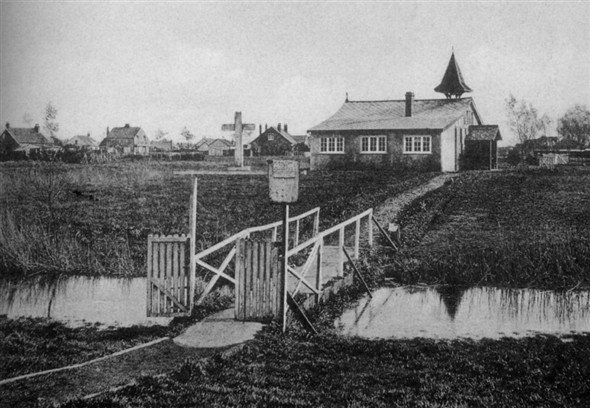 I attended St Annes church for Sunday school. Miss Gwen played the harmonium and Miss Albutt gave the talks. She was very serious – but also very informative about the structure of the Anglican Church, missions to seamen stc. Some children put their 3d bits on the tortoise stove so they were very hot when she picked them up!! When a bit older I attended the morning services and was allowed to ring the bell – on one occasion the bridge over the dyke was flooded so Mr Mortimer the vicar had to roll his trousers up to carry Miss Gwen and Miss Albutt to dry land!!

Mr Eales often preached the sermon, so I only saw him as such and not as a school teacher – later I was very friendly with his daughter Margaret.

I remember on one occasion after Mr Mortimer had moved the Rev David Cullen took the services and was very musically inclined – we struggled through two verses of one hymn – he put up his hand and said “Stop I cannot bear to have such a beautiful hymn ruined” I know he did have a point but now I cannot sign that hymn in church with a serious face.

At eight I started at the Long Road Primary School – in Mrs Skinners class – Mr Benson always took assembly – I was frightened of him, also Miss Gosling. We always sang Grace before school dinners the words of which I found very difficult to understand. It definitely firmed up my resolve to explain all the hard words to my children.

Physical training was done as a very brisk pace by a Mr Devonshire – sporting an equally brisk moustache. I think he must have done PT in the army and tried to get us to the same standard.

I desperately wanted to learn dancing at the Georgette Juveniles but als could not afford it. The alternative was found by going to Peggy Martin’s class (who had been a professional dancer) and was taught in her tiny kitchen, often with some sugar on the floor – all for the price of sixpence a time. She did very well and the pinnacle of success was reached when we did a show ay the Bata shoe factory and another at Thorney Bay camp.

I started attending evening services at St Katherines at the age of eleven. Rev Cullen’s musicality influenced the choir to give very good productions – such as Oliver of Calvary and Steiners Crucifixion. The evening of my confirmation arrived and I had made myself a very limp white dress – adorned with some mud, having made a sortie to the toilet over a wet field!

At one eveni8ng service I sat next to a very elderly lady who talked to me about the large painting on the right side of the church – explaining that she was the child in the picture. 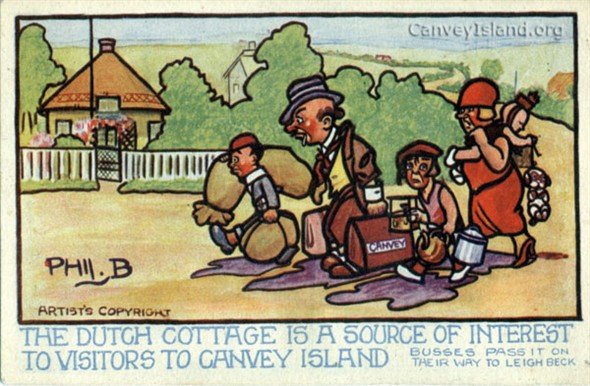 One of Phil Blanchard’s cartoon postcards

Next to our bungalow on Canvey lived Phil Blanchard – he had a hugh garden and spent all day tending it. He had a long white beard and only needed the appearance of Peter Rabbit to be straight out of a Beatrix Potter story!

On that cold February night we were awakened by our dogs frantic barking – fortunately we had access to the roof space by an outside rickety wooden ladder. So although very wet we were above sea level. May parents stayed with relatives, but I was evacuated to a kind family near Westcliff high school so I could still attend. Sometime after the flood we were told that the worms had all perished and needed to be replenished. The biology teacher at Westcliff organised the local girls to bring in worms. I then had to negotiate the bus, train and walk home with a satchel, hockey stick and jars of worms! At a later date when someone made a deprecating remark about Canvey, I told them that at least our worms were from posh gardens.

One fact I remember about our bus journey off the island – and the distressing site of seeing all the farm stock floating, is that after we had gone round Northwick Corner the water was so deep that the bus had to go round the Dutch cottage and then back to the main road. The original builders must have known about the sea levels.

When we returned to the island we went to claim our black cat – the RSPCA had gathered up a lot of pets. Unfortunately cats as opposed to dogs are not very forgiving about being abandoned. My father and I walked up the rows of caged cats calling his name. In the end we just had to take the one that looked most like ours!

Our local pharmacist was Madge Moore, who dispensed medicine along with some very good advice on whether or not a doctor was required. I really enjoyed being a sea ranger in her group. She was a person of great wisdom and kindness. 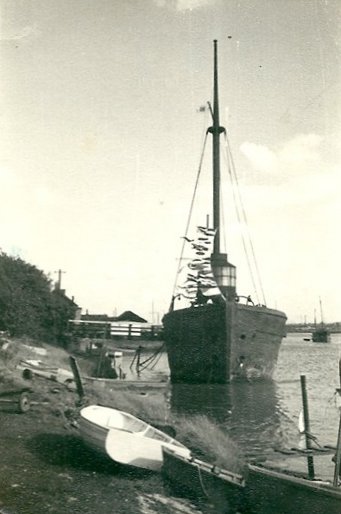 Geoffrey Prout, the boat builder, came to some of our meetings and took us out on one of his first catamarans. Madge organised for us to visit the Benfleet yacht club – The Inner Dowsing light ship moored in Benfleet creek. I now live in Kent and found the boat turned into a restaurant as a local marina and inside it still had a Benfleet yacht club life belt. Sadly now the light part has been removed and the boat has been made into apartments.

In my teens I joined the young liberals and met the then leader Joe Grimond. I remember sitting in the memorial hall listening to Mr Alterman and Colonel Fielder giving speeches.

Are there still sand lizards on Canvey – basking in the sun beneath the bars that I turned somersaults on, that bordered the dykes –fields with wild flowers and ponds of newts – listening to sky larks! I suppose not.