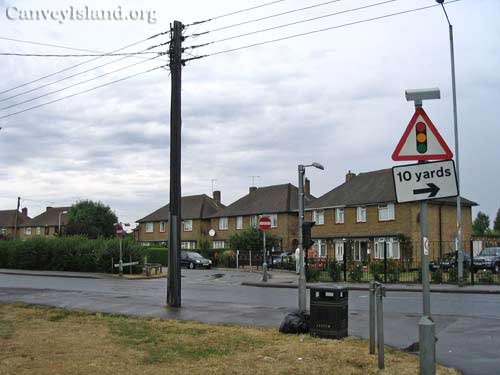 I’ve lived on Canvey Island all my life and have many friends here. I was brought up in 2 Thameside Crescent and was one of 12 children. I had a very happy childhood, most of which was spent outside in the street. We played hopscotch and skipping and knock down ginger, hide and seek and of course with our dolls and pushchairs.

In the summer we all used to go over the nearest field to the farm and when the farmer wasn’t looking we used to climb up the ladder on to the roof of the barn which was thatched and slide down it and jump off the end to the ground. There would be a lot of cows in the field which we loved and also lots of cow pats. The field would be covered with buttercups and daisies. We would put the buttercups under each other’s chins and if it glowed yellow we would say ‘oh you like butter’. It was very safe those days, nothing ever happened to us.

Every summer the circus and the fair used to come to Canvey. Because we lived on the main road we were in a prime position for a good view. All the elephants used to walk all along the main road holding the one in fronts tail and I remember hearing their trumpeting for miles away and one day I ran out the front door and across the small green opposite and tried to jump the dyke but landed right in it and cut my foot on some glass and of course was taken home for first aid and was most upset because I missed the elephants going past. 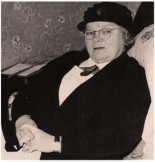 My mother Lily Sparkes had 12 children and I was the 2nd eldest so I had a lot of work to do indoors. I used to have to help get the children dressed in the morning and took many of them to school. I even bathed the new babies that my mother had. I was the one that had to go and get Nurse Morgan when mum went into labour but she only lived up the road at No.10. I remember the smell of Dettol when she was in the house.

We had a coal fire in the living room and gas fires in the wall of every other room but never had any heat in the bedrooms. I remember the coal being delivered and taken round the back and thrown into a special coal house. We had many callers at our house, there was the chimney sweep, the baker with a big wicker basket full of tempting bread and cakes. The Insurance man, the butcher, tally man were always trying to sell mum things. One day a man knocked at the door with an ‘unbreakable tea set’ in Pyrex, he said “let me give you a demonstration of this wonderful Tea Set madam” and said “watch” and threw one of the cups down on the step, at which point it promptly smashed into a million pieces. Leaving my mum to clean up the mess he quickly jumped into his van with a red face and sped off. 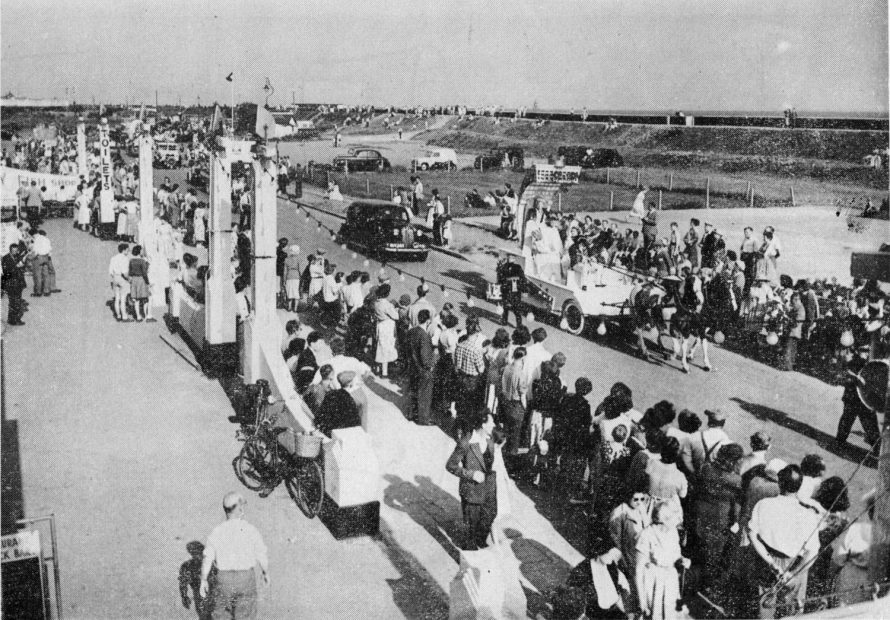 I used to love the carnivals of my childhood, I was even in them a few times. My sister and I used to be in Georgettes Juveniles dance troop and used to be in the shows over Colonel Fielders Camp. I remember I loved singing and dancing and wore some beautiful coloured costumes. One year Valerie, my sister and I were in Cinderella and she was Prince Charming and wore a pale blue suit with gold buttons. When I wasn’t in the show I remember sitting in the front garden listening to the show on a still summers evening. They always sang ‘Goodnight Campers’ at the end. Val and I were also in the Girl Guides. She was Patrol leader and had a whistle and our Captain was called Miss Allbut. She used to take us up Benfleet Downs in the summer and we’d do tracking following her signs she’d made out of twigs. We used to meet weekly in Long Road School which was my school and we did first aid and marching and exercises etc. I loved it, we were 2nd Canvey Girl Guides.

I was also in the Girls Brigade. Which I thoroughly enjoyed, we did dancing with tambourines routines and gave our demonstrations up the Monico Ballroom. Everything was navy with red ribbons. On Sundays my brothers and sisters and I went to Sunday School down Sydervelt Road. Mr Hart was the teacher and in the evenings I went back to church to sing in the choir.

We never had holidays as a child but when my uncle came to see us he used to take me back home with him to Colney Hatch, that was my holiday staying with my cousin. 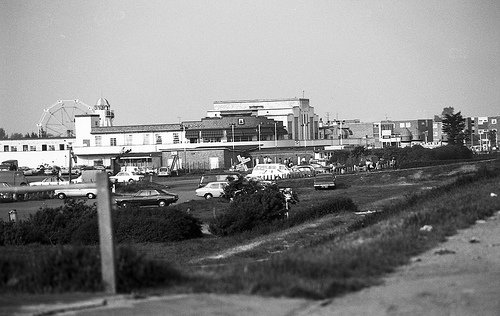 Another place we used to play in was the gun site. We’d play war games in the dark tunnels. The beach was a lovely place to go down to the bay by Fielders Camp. There was someone selling ice creams there I remember and all the day trippers used to park on the grass right the way round the Monico. There were many rides for kids those days and one of them was trains with a big bell on the front. There was the casino with the bumper cars and racing track, a good place for boys and music. There was a juke box playing all the rock and roll records of the time around which my friend Maureen McNulty and I used to jive all day.

There was the windy nook that was a moving floor out on the veranda type of thing with a wind machine blowing up through a hole which would throw your skirts above your heads, they were very full skirts in those days about 1961. Some of mine were worn over hooped petticoats. I remember one which had big sailing ships all over it and buttoned down the front.

There was a dance every Saturday night up the Monico Ballroom which is where I met my first real love, Mike Gregson in 1964. I went in for a Personality Girl Competition for Canvey Island football club in this ballroom and came 2nd. I really had a wonderful evening and our photo was in the local paper. The winner was Janet Morgan, a lovely brunette. This was 1966. Another good place to go was the Bay Club on the seafront. Downstairs was a big wooden floor where me and my sister used to go roller skating when I was about 14 and upstairs later in my teens I used to go for a drink and we could put our own records on the record player. I had some wonderful nights in there. It’s a shame they pulled it down.

My dad George Sparkes was very well known on the island and well liked, he started off as a painter and decorator after the war and ended up working for Fielder over his camp painting all the chalets. When the war started he and his unit had to march off the island. 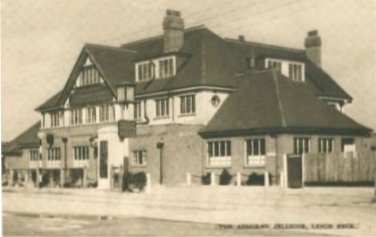 Dad was one of the builders on the island and built many houses down Mietsin, Letzen Metz and Temptin Avenues. He was always telling jokes after work in the Jellicoe and I often used to pop in there for a drink with him myself. Two other clubs on the island were the Corner Club (its still there) and the Kynox Club. I remember Green Glades Café in the High Street where I used to go dancing and Doreens Cafe and one along the seafront between May Avenue and Keer Avenue that was popular with day trippers.

Kings Holiday camp was popular. You could rent a chalet for a holiday or take your caravan there. I worked over there as a cleaner when my eldest girls were 10 and 5, this would be in 1982. Bobby Land was my boss, he used to do impressions of Norman Wisdom. He worked for Kings and also did all gardening and cleaning at Jacks House. Kings was the best on the island for night life and I used it from 1964 till it closed. I saw many famous people over there, including Marty Wilde, Joe Brown, The Searchers and many more.