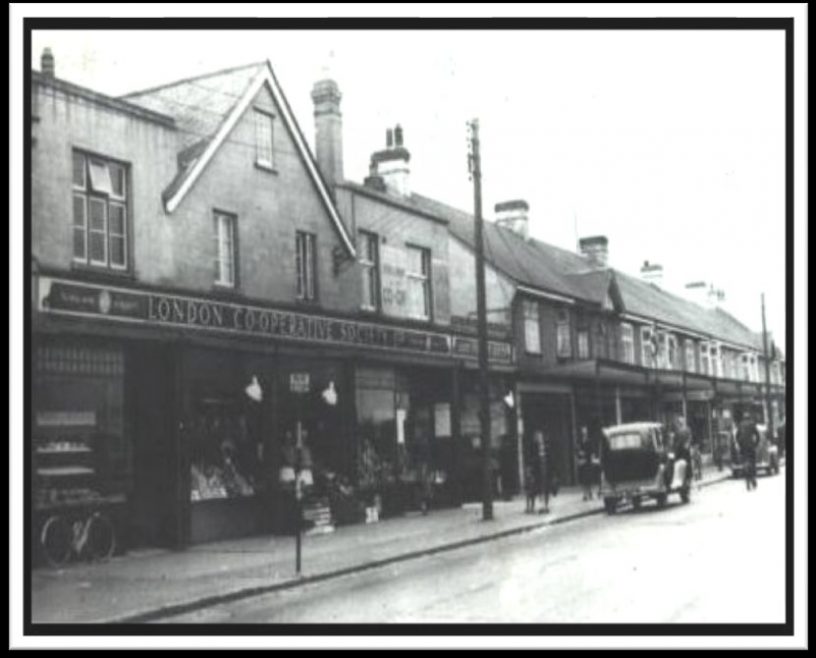 The rounds man Mr George Senior, a very lovely and sincere rounds man to his customers, working from the Co-op Bakery at Haystack Corner. Just about at the back of Iceland, in those days the Co-op had a line of shops next to ‘The Haystack’ Public House including Bakers Shop, Bakery and Butchers Shop. In those days a very Modern Grocers store, a vegetable Shop and a Drapers Shop.

The Haystack, I believe gets its name from the Landlord Mrs Draper. Who owned horses and the land which we call ‘The Paddocks’ was in fact a paddock to feed and train race horses.

Now we would start our round every other day early in the morning.
We leave Barclays Bank, on the other side of lakeside corner, where the betting shop is today. There was no bank or library as there is today just a big open field. In fact this field was offered to the Leigh Beck Baptist Church many years ago by a very dear sincere Christian man known by so many as ‘Grandpa Stevens’. The offer was “Pay me back when and if you get the money”. Just imagine how central this church would have been today. Granpa Stevens was little in height, but broad in the shoulders at 84 years young he was as fit as a man who had just left the Royal Navy. He built Steven’s Bakery at Leigh Beck working at night and often during the day. He would unload barges full of builder’s sand shovelling by hand. Few could keep up that pace for Canvey Supply.

Right let’s get walking along Central Wall Path.
The path rose steeply at the start and sloped most of the way to your left hand side where there was a dyke, that’s walking towards Benfleet Station. This path was much used by as we call them today ‘commuters’. 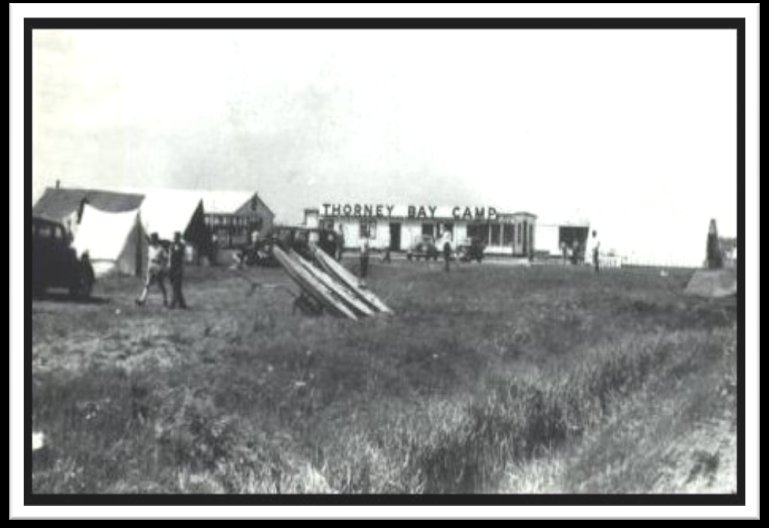 Buses were very unreliable and so very often ‘Sorry, Full Up’. Bus drivers were very smart men proud of their driving and knew many of their passengers, what stop they would be at and at what time of the morning. The conductor’s cheerful ‘Pass right down the bus please’ and ‘Standing on the lower deck only’, and ‘Anymore for Jones Corner, Craven Avenue, Thorney Bay Camp?‘. Of course that was for the visitors who flocked in their hundreds to Canvey. ‘On the Buses’ film and TV show was calm compared to what went on ‘on our buses’. Thick dense fog all winter through was a driver’s dilemma but never stopped ‘our buses’. 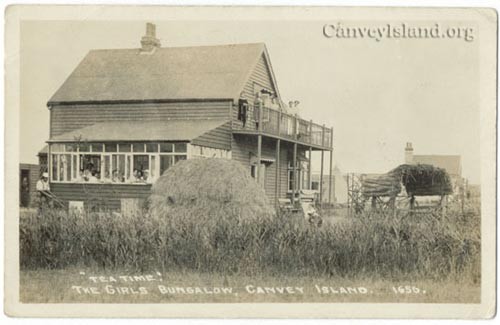 Cyclists too used that narrow precarious path. An unwritten law saw cyclists dismount to pass pedestrians. One of the first houses you used to pass was the ‘Young Ladies Refuge Home’. Always full.

Only just recently, 2008, one  of the original big wooden clad houses altered that was where you actually came alongside the lake for the first time.  It was disappointing to see the ‘Old inland Lighthouse’ at the eastern end of the lake demolished. Wicked I would call it. ‘Cherry Stores’ and absolute heaven to all who loved ‘old fashioned sweets’ sold of course by the ounce from enormous glass jars. To children who stood on tiptoe to search the shelves for their individual favourite. In those days ‘Humbugs’ were always ‘3rd shelf up along the right hand end’. Good old days of reliability when ‘out of courtesy’ the customer was always right. 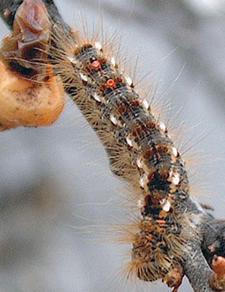 Caterpillars, the brown tail moth type, were the terror and fright of the path. They used to leave you itching for hours and stick insects would sit on your shoulders unnoticed and cadge a lift to Benfleet. Slow bushes and blackberries grew in abundance both sides of the path. (This can still be seen if you join the original path in Soames Avenue near the Golf Club Training Range and onto where Leaches Farm used to be, now Canvey’s Recycling Depot.)

Then you would pass Miss Quen’s School. Miss Quen and her sister, well they were in those days, very old fashioned wearing long swishing skirts and very fashionable blouses. Chalk and slate board still in use. I attended Miss Quen’s with my sister Doreen then when Long Road School opened, although still unfinished, I was one of the first to attend with another good Canvey Man Bob Nash. How they could stand and cheerfully serve customers on a raw winter’s day I don’t know. Nash’s, Butchers of quality, reliability, good meat and ‘glorious dripping’. Oh how a slice of dripping on good home baked bread would sustain you through days of rationing.

Next along the path is the very controversial opening to the notorious smugglers tunnel. Some people would laugh in your face and tell you to pull the other one but If and that is a very important ‘if’ you grew up old enough to know that talk of the tunnel was an everyday ‘conversation’, a conversation of fact, not as it is today hardly mentioned and nearly forgotten. I’ll write my own thesis of the tunnel later on and try to bring it to life.

I believe next you would be walking by one of ‘Cooks’ farms that could also be reached by Denham Road. Someway on at the bottom end at Church Parade (Now how did it get that name so far from St Katherine’s Church) you would come to a steep drop in the path. In fact about 7 steps down then the path rose steeply and turned. This was the down fall of many a cyclist. You would be passing Winter Gardens Baptist Mission which was built before the war then commandeered as a much needed Air Raid Precautions Post. It was their HQ and wardens used to muster there during the air raids. But after the war a great stalwart of a Christian Lady pestered everyone, especially the Deacons of Leigh Beck Baptist Church until she was given permission to have the building ‘converted’ back to a Mission and Sunday School. Mrs Knowler was her name, then came Mrs Gare. They were inseparable although both were very elderly. Next came, Mr & Mrs Pastor Lewin, a man of god, a man of god’s word. All three very faithful for many years until the Lord called them home. 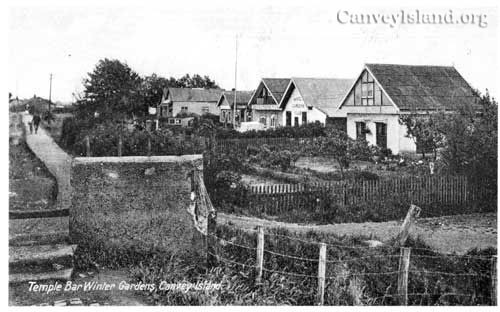 The Concrete ‘Temple Bar’ complete with step & spikes both later removed including this section of wall. Only the out of sight here left hand wall remains. Here Lunns Store has been added as well as Wintergardens club.

Now along the path to Link Road where the old path can be seen as you walk along a very creepy section with trees forming an arch over the path. Here was Lunn’s Stores. Almost a 24 Hours service but of course closed on Sundays, I knew these people.

Now you would come to two strong concrete pillars and a stile. During my time in the Royal Navy when I was courting a wee lass of Canvey, Yvonne King of Georgette Juveniles fame, because on a Sunday evening it was impossible to get on a bus at Hawksbury Road all full with ‘day trippers’, we used to walk with the dear mother-in-law to the stile to say goodbye. Then I would walk to the station and pick up a Portsmouth flyer, a ram shackled coach and service to Pompey.

The path then heads north running alongside Castle Point Golf Course, years ago there was a lonely gas light and here the path runs in a straight line to Canvey Road, quite near to the Old Central Wall. Here also was Leach’s Farm, quite a big farm in its day. The old farm house still standing now used by Castle Point Borough Council and also the waste disposal depot.