I was born in Leyton in 1923. My sister Eileen was four and my brother Terry was two. I was one of twins, but Peggy died at fourteen months from meningitis. My younger brother Bernard arrived six years later. Mum died in 1930. Two Aunties and Uncles took in the boys. When Eileen was fourteen she left school , took over running the house and had the boys back.

There were only 10 houses on our road, all on the same side. Opposite there was a fence and behind that the railway sidings of the Leighton L.N.E.R. station and the coal yards. Each working morning the coal carts passed through our road; Í remember well the Board on each one said “ 2/4 cwt” . They were all horse drawn, as was the Milkman and the Baker’s carts. Very few people had cars; Mr. Ryder next door to us had one, he was a Train Driver, and went out at the crack of dawn.

There was a beautiful park with “Keep off the Grass” signs, but another park nearby had swings and a see-saw, and another one with Tennis Courts. They were only five minutes away but we seldom bothered to go – the road was our playground. We played all kinds of ball-games, skipping, hop-scotch, whip and top, running with the hoop and five stoners. In the winter we made our own cross-word puzzles wiyh pencil and paper. In the Kitchen there was a cupboard with building bricks, Ludo, tiddly-winks, lead soldiers, (when the heads came off you put them back on with an old match), but nothing big.

On a Saturday we got our penny pocket money – it didn’t stay in our pockets for long, we were off to the sweet shop. Most sweets were 2oz for 1d.If you walked a lot further, you could get 4oz. of homemade toffee for 1d. if you ran errands for neighbours you generally got 1d. I still remember going to the Chemists for the lady next door repeating all the way “Pottisasmicure” – it was put into a bag, and I found out one day that it was Potters Asdma Cure.

On a Sunday evening Dad usually sent one of us over for 2 bags of sweets, and that was us. Our needs were few and we didn’t seem to have any worries. They were happy days. I don’t remember bottles of pop – Lemonade Powder was mixed with water if you were going a picnic. Packets of crisps came in later years, you got salt in a screw of blue paper, they were for special outings .No computers, mobile phones or T.Vs. Dad made our first wireless, or whatever it was called, we had to take the accumulator to be charged. The Children’s Birthdays, or Hello Twins. I never knew anyone with a home phone. I think you could use one at the Post Office. 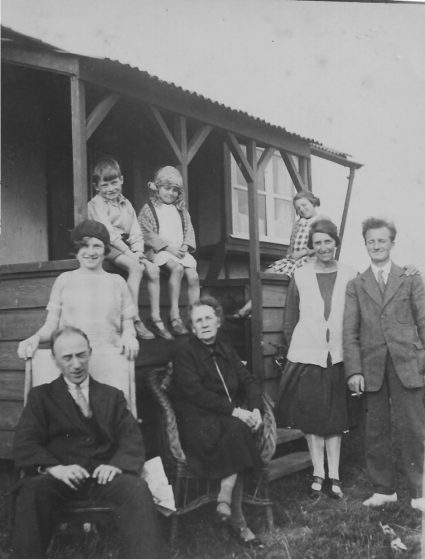 The O’Neill family at the holiday bungalow, Canvey Island, c.1928

Our Summer Holiday was a week on Canvey Island. No planes or taxis needed. We walked to the end of our road and got the tram to the L.M.S. Station, then the train to Benfleet, which is a few stations before Southend on Sea. When we got to Benfleet we joined the queue walking down to the river. The river wasn’t terribly wide but there was only one man with a small rowing boat. When we were all over we waited for the bus which took us to the Haystack pub. We then walked to the bungalow. As far as I can remember, the bungalow belonged to a friend of a friend, who rented it out a few times a year for 30/- a week. It was wooden with a corrugated roof. It was raised from the ground at each corner. No running water, gas or electricity. There were water-butts at each corner of the bungalow. Each morning 2 of us walked to the Dairy, our jug was filled with milkfor 1d. and our pail was filled with drinking water for 1/2d.

When we were all ready we would walk to the beach. If the tide was out we played or sat on the beach. When the tide came in, we had to move back onto the rocks of the sea wall, and it was lovely for swimming.

In the early days there wasn’t a church, we had to get the bus into Benfleet where mass was said in a rented room. In the later years a bridge was built, you wouldn’t know it was an island, and now they have their own church.

In the summer the ‘fair’ used to come to Wanstead flats, a few miles from Leyton. We only went once a year. We would save about a shilling each. One penny was for the tram, and we all agreed to save two pennies, one for the fare home and one for the Joy Wheel where we all met up. The Joy Wheel was in a big tent. It was a solid wooden wheel, about 6 ft. across and about an inch above the floor. You all sat on it and when it was full it started to spin, as it got faster you were all thrown off. When it stopped you all got on again. When we had had enough we went for the tram. I remember one year we all decided to spend our last penny and walk home. Never again. We were ready to drop when we got home.