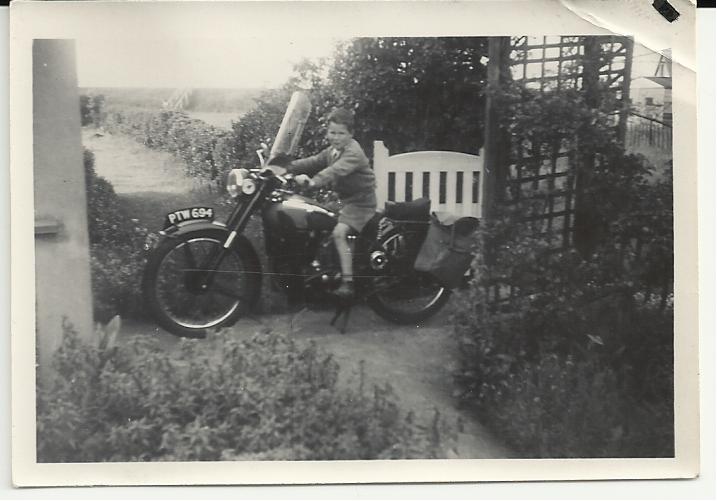 sea wall and steps in background

In the 1940s my grandparents Alfred and Ellen Cornell had a bungalow at Canvey Island, this was one house away from the sea wall. It was in the Newlands area and looking at the map I believe the bungalow was in Brandenburg Road although I cannot be sure. It was definitely one of the long roads in Newlands leading to the sea wall. The bungalow had a verandah down the front side and we used to play shops there using the verandah top as a counter.  As you entered the front door there was a vast living room with bedrooms to the right and the kitchen was at the back. I used to spend every school holiday down there with my grandparents and those long hot summers seemed to go on for ever. We had no running water and you had to carry a jug quite a few streets away to get water from a stand pipe. My bedroom had just a bowl and a jug to wash with. There was no electricity either – just a gas lamp for illumination. I can remember we had to get a tin bath out to put in the front of the coal fire and getting hot water from a kettle on the the stove for a bath. The radio was charged by an accumulator – a big heavy car battery type piece of equipment and when it lost it’s charge we would have to go up to the shops and exchange it for a freshly charged unit. The toilet was also outside but not plumbed in – it would have to be emptied every day by my grandparents and the contents placed in a cess pit in the garden. 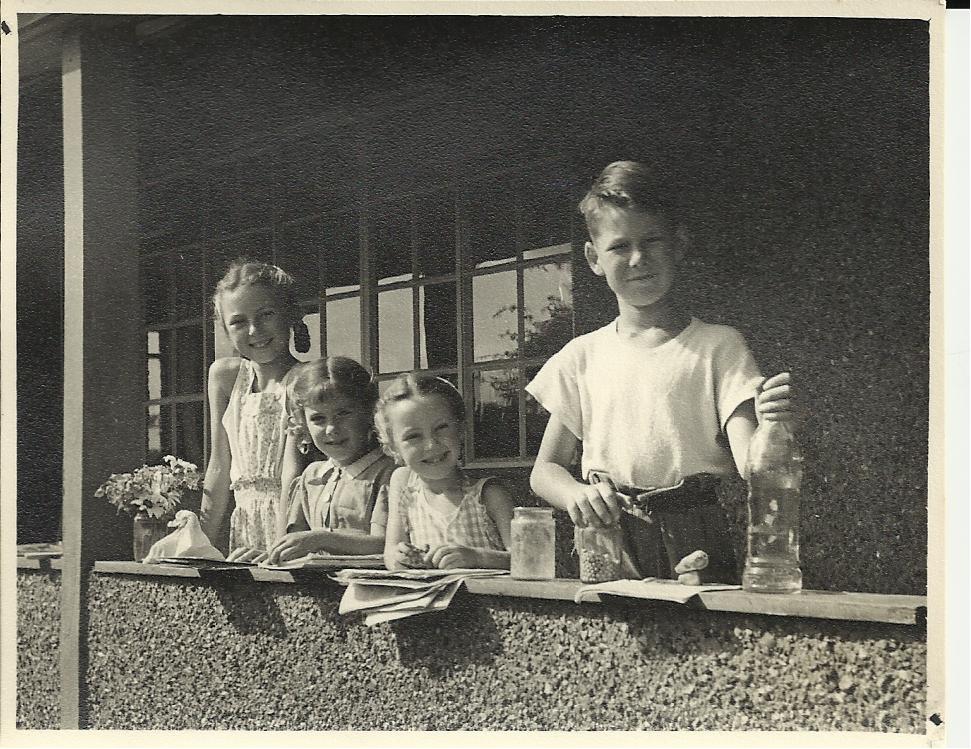 playing shop on the verandah

The garden had fruit trees and a lawn which my grandfather cut by a push mower.  The road was just grass and led virtually up to the sea wall where there was a little wooden bridge over the ditch and wooden stairs that lead up to the wall, Lizards used to bask on these steps or butterflies, all you saw were cabbage white butterflies then and the occasional red admiral. I never ever saw a snake but my cousin Ron used to catch them and skin them.  The sea wall was just a grass hill and you could slide down it. My cousins round the corner at  Uncle Fred’s house used to have a big box kite and it really flew high with the sea wind and you needed a lot of strength to control it. Not many people had cars in those days. There were no telephones either in the bungalow.  My mother would send my favourite comics – The Dandy and Radio Fun by post.  When I had read them I could take them up to a newsagent near Small Gains and swop them for something else. All my cousins from Upney were around too – they had another bungalow very close. Also my other cousin Christine (my mother’s sister’s daughter) came down in the summer.  I just loved Canvey and being so close to the sea, just to arrive at Benfleet Station was a magical thing – the sound of seagulls and the wide open spaces, the ancient houseboats in the creek by the station and then boarding a double decker green bus and going over the bridge into the island and the journey inland surrounded by cows grazing in pastures. At the centre of the Island was Haystack Corner and when my parents came down they would go to the pub there and I would sit outside with a straw and a bottle of Tizer and a packet of  crisps.  My Grandparents bungalow was in the Newlands district, it was surrounded by mud and saltings but when the tide came in it covered them all and it was amazing how transformed the view was with a high tide, you could see clear across to Hadleigh Castle on the other side and Two Tree Island in-between. 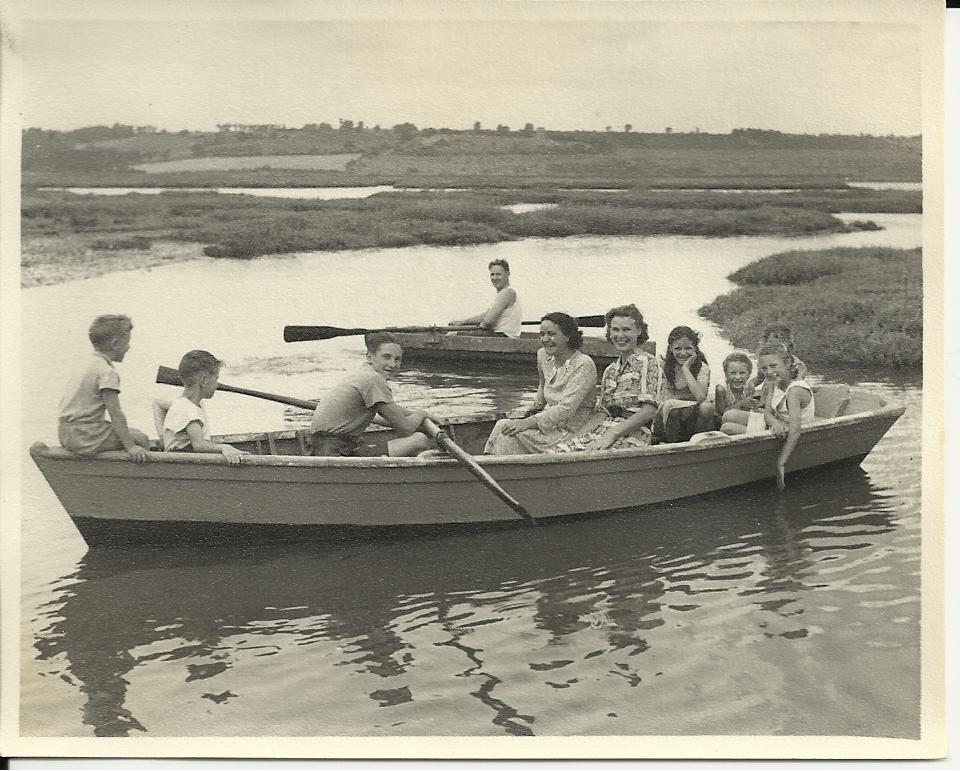 in the creeks and saltings – our family

Canvey seemed a big Island to my young self but on researching this I learn it is only around 15 miles to walk around it. I learnt to swim there in the creeks. The saltings enabled you to get out to the main channel of water without walking in the mud or if the tide was in you could swim in area below the wall. There were many routes through the saltings to reach the main channel and we used to call them by different names and some were graded hard or easy. If I got muddy walking to get to the water it was easy to wash off, more scary were the crabs or tin cans on the bottom. Some of the crabs were really big and menacing. Later when I got to try to swim in a swimming bath I found it hard as so used to the salt water in the sea which helped you to float better. Not that I was a great swimmer but I could do the breast stroke and enjoyed floating on my back and drifting.  All the swimming trunks were made in wool in those days and used to fill up and swell with the weight of water.  My uncle Fred who lived in a bungalow directly below the sea wall had a couple of rowing boats. The channel where all the water was we called ‘the main’ and sometimes when the tide was really out we would venture past there where there were mud banks.

Then came the great floods of 1953.   My Uncle Fred was staying at his other house in Upney and my grandparents were in Upney too when the news broke, we only heard bits and pieces but thought it was bad and we thought the whole of Holland had been flooded too and we would never see Dutch flowers again. I went back to Canvey after the floods and stayed with my Uncle Fred and the whole area was busy with building up the walls. There were were hundred of pontoons around and I was determined to get one for my own personal raft and one day I swam up to the row of pontoons and liberated one.