Written by the late Doris Manly 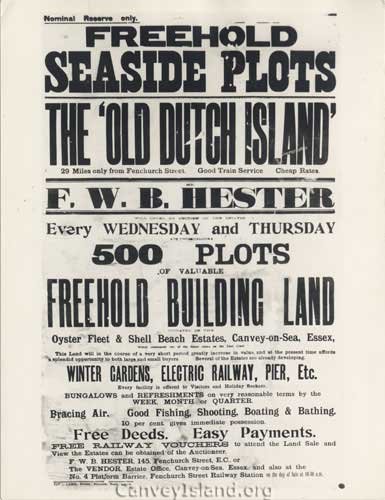 In the year 1901, having noticed the advert of Mr F Hester concerning land for sale and a free meal for those who purchased a plot of land, my Father-in-law decided to go and see for himself what this place Canvey Island was like and attended one of the sales of land. He purchased 4 plots not having any idea where the plots lay.

I remember him telling me that he travelled down from Town sometime later in the year, with the intention of finding the plots and fencing them in. On arriving at Benfleet Station (the old station where you can still see two of its original rising above the wall on your rihght hand side going to the station from the Island.) he hired a trap thinking it would take him all the way to Leigh Beck, however, when the driver arrived at the Village he would not go any further, so he had to walk the rest of the way carrying some fence posts. The plots he had bought were staked in amongst golden corn. The family used to come for holidays, bringing a tent and all the utensils they needed. Whilst they spent their first holiday on the island they built a shed to save carrying so much backwards and forwards from London.

By 1908 my father-in-law had a brick bungalow built by Mr Wainwright, as he was pensioned off by the Post Office owing to bad health and had to live on 15/- per week and decided to live on the Island. Most of the firewood was driftwood which most of the islanders used to gather from the shore, and as there was no gas, electricity or main water, they had to cook by the coal ovens, oil lamps and stoves and their chief water was rainwater which they used to catch off the roofs of the bungalow into 100 or 200 gallon tanks or wooden butts and use very sparingly for they did not know when the next downfall of rain would come, and if they ran short of water the only way they could get any more was to get the carrier to bring an old fashioned milk churn full of water from the village pump. Often the Monday’s washing had to be done with the water you used for bathing in, when scarce.

Our baker used to come from Benfleet three days a week and would not deliver beyond where my Father-in-law lived, so when I first came on the Island I had to ask him if he would take our bread and I would come and fetch it from his house.

The population was very small at that time and Ted (who became my husband) then a boy of 12 attended the Church school in the village where there was about 40 school children in all. They would be taken to school in the morning, the boys in a tumble cart and one day the belly belt snapped and up went the shafts and out tumbled all the lads over one another and shrieks of laughter as they sorted themselves out, the girls went in a waggonette, they would take their dinner with them and would return home on shanks’ pony. 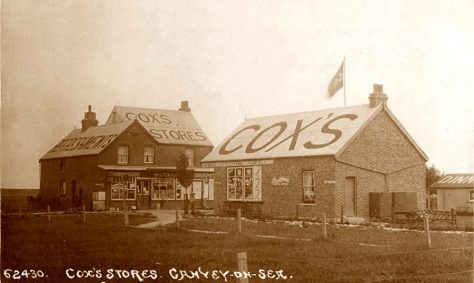 I believe that Ted worked for Cox’s stores, the general shop at Leigh Beck end of Canvey before he left school and when he was 14 years old. Those days people used to come down a lot for week-ends so Ted and his mate used to deliver the groceries, coal and oil. At one time when they had to deliver all three articles in a wheelbarrow one lad in the front pulling like a horse, the other holding the handles. The roads those days were more like a seawall in many parts and even the main road was much higher than it is now (after the style of a cattle road). Their destiny was across Newlands, the time around 10pm. I do not know if the goods ever got there, as they had a job to see where they were going, the light being only a hurricane lamp. Unfortunately one of the lads slipped on the wall and all the goods went over into the dyke. I guess they knew all about it when they got back to the shop and told their employer what had happened. I fancy their wages was around 2/6 per week.

Then the 1914 war broke out and most of the lads that Ted went to school with had to join up, owing to heart trouble Ted was not accepted, so sometime during the war he became the Postman, he used to cycle to Benfleet post office, which is still the same one up next door to “The Anchor”, perhaps he had three letters to deliver, one in Winters Gardens,. one in the middle of the Island and one at the Point end, it that time there was a gentleman who worked somewhere up Town and every week day morning he would set out about 5.30 and walk across the Winter Garden to the Station from the Point end of the Island. His wife would accompany him, then back again in the evening and Ted would often meet them either on his way to Benfleet or his return journey home. If he had for some reason to leave his bike on the roadside those days, it did not matter for how long, in fact, on one occasion it lay on the roadside for a week before he could go and pick it up  and there it was, just where he had left it.

Miss James was a grand lady and worked hard on the social side. She used to encourage the old and young to get together at her house down by the lake, by Lakeside. According to what Ted used to tell me they would set up plays, etc. Christmas week they went out Carol singing. I believe they used to take a small organ, or the likes with them and other musical instruments and have a really happy evening together. There was no collection for money but the folks used to have drinks and sandwiches ready for them when they had played the carols,  Miss James worked for the benefit of Canvey many years, I should, think more years than any other person.

There was a great deal of cattle roaming around Canvey those days, and when folks went out in the dark winter evenings it was quite common to fall over an unseen lump which turned out to be a young calf.

January 1929 was a very cold month and I believe the Creek was frozen over, and for three days no conveyance could cross from one side or the other. I myself had to break the rainwater up with a pickaxe and drop it into the kettle in lumps before we could have a cup of tea and it froze -up very quickly again, all the round tanks which held 100 gallons were very funny sights for either the side seams burst open with water freezing up as fast as it ran out and down the side. The lids were lifted up or the bottom of the tanks come apart. Ted was asked to clean, one tank out so when the sun had been out long enough to warm the outside he tipped it upside down and it came out a solid lump of ice except right in the centre. 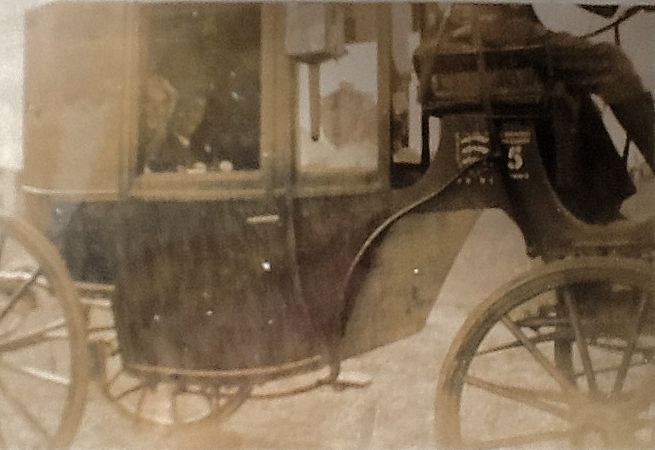 I came to Canvey in 1920 and met Ted and we were married at St. Katherine’s Church. I went to my wedding in a landau driven by a pair of horses and the coachman was a real old character named Mr. Whitehead who earned his living many ways. One was by having a greengrocers round and I well remember in the spring time he would send his sons with sacks every Friday to pick the very young mustard tops and it was not till some weeks after that I tumbled to the reason for this every Friday picking, it was what he called turnip tops, he was selling on Saturday for 3d a lb, to us folks who used to watch- them picking it from our window. 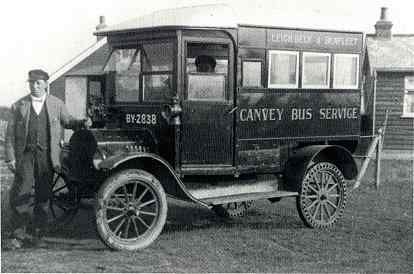 Before the first private single buses arrived on the Island there were old half ton Ford vans converted into rough buses which the public were only too pleased to make use of, and there was many a laugh caused through them being what they were. On one journey when the bus reached, the Red Cow (now the King Canute), part of the flooring fell out on the rood, a passenger called the drivers attention to it, his reply was ‘that’s alright mate, we will pick it up on our way back’, and sure enough there it was still in the road on our journey back and the driver got out and put the boards back and drove on quite unconcerned. On another occasion the Rendevous Club was on fire and lay a distance off the main road, across the fields. As a bus was travelling along the main road, the driver spotted it and said to his only passenger “are you in a hurry”? The reply was ‘NO’, so they both get out and walked across the field to see the fire. Time did not count so much in those days. One fire I can well remember, when all the folks around got together, the men did their best to keep it from spreading, whilst the women had brought their buckets with them, a dyke lucky enough was nearby so they mode a human chain, a man filled the buckets with the dyke water and the women passed them one to the other until it reached the one nearest the burning bungalow. We could not save the building but saved the fire from spreading. Often in dry weather the grass would catch alight through someone’s bonfire, (we had no dustmen those days and had to get rid of the rubbish as best we could) everyone around would run out with their spades and form a circle and beat out the fire wherever it was creeping  and so got it under control.

In the early part of this century the small community had to rely on each other. If you ran out of anything then your neighbours would help you out or by reverse, that, I feel sure is why so many people came back many times to Canvey for their holidays, the friendly atmosphere, freedom and not having to dress up to fashion, just a happy go lucky holiday. But those days have gone. A new Canvey is springing up. No doubt lots of folk like it better, but I feel sure those who have lived here for over fifty years still look back and wish they could bring back those landau days of peaceful cornfields, skylarks and to hear the trot of the horses’ hoofs, no speed and time to live.