I was shown the cover of a booklet taken from the internet which was the same as the booklet I bought in May 1946 – except mine was a pale apple green colour and priced 6p. In it was a photograph of my step-grandad, Nathaniel Channel (Nat) in the little rowing boat ‘little Peggy’ on Smallgains Creek with the old ship ‘Annie Jones’ berthed in the mudbank behind. 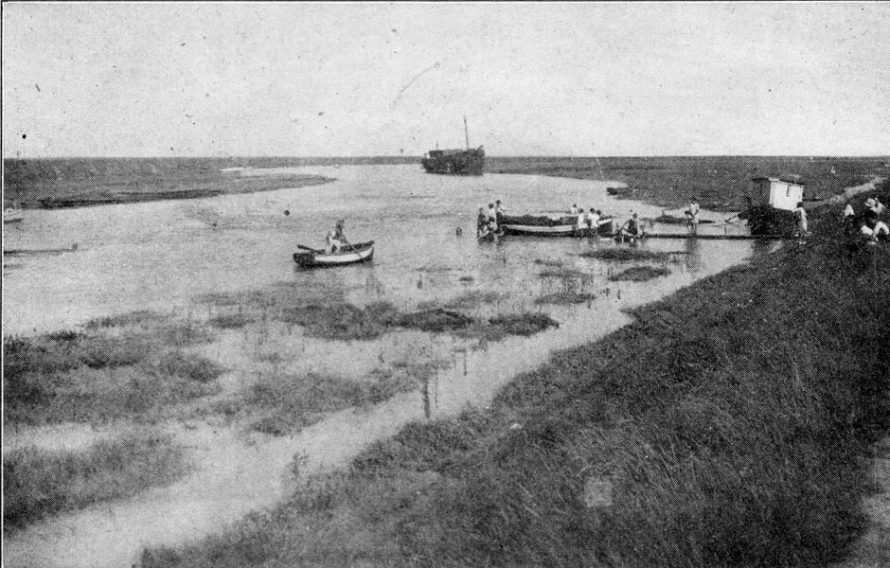 He was married to my gran – Carrie (Caroline Channel) of ‘Ye Captain’s Mess’, Leigh Beck.  Married three times – Gran had three daughters from her first marriage, Bessie, Amy and Charlotte (Lotty), my mother and Dorothy, Colin and Eva Butcher from her 2nd marriage.  Eva married Jack Nicholls – somehow connected to the Islands buses. Roy Brown – Dolly’s son lived with Gran. He went to Dunkirk with the little ships – although under age – and died later in the Navy during the war.

‘Captain’s Mess’ was a two roomed bungalow – living room and bedroom. Out back was a pantechnicon, in which slept granddad, Colin and Roy – a privy and a long shed containing all the supplies.  Tea, sugar, tins of Libby’s evaporated milk etc. delivered fortnightly or monthly as needed from Lewis – grocery stores, Gasgoine Road, Barking. All the cooking was done in the front of the shed on primus stoves or outside weather permitting. Those were the days – shops gave us Xmas gifts! Paths from the bungalow to the pentechnion, privy and shed were made from empty milk cans sunk into the ground.

Across the road was ‘Grekis’, Temptin Avenue, there lived the ‘Monkey Lady’ – she kept at least six monkeys around, all running free – I played with them many times.

After the war, Aunt Doll and Uncle Arthur Brown bought ‘Grekis’ and lived there with their sons Harold and Clifford.  I believe they adopted two girls.  Harold was killed in a motorbike accident.

I remember using the stepping stones and the pony trap at Benfleet and the opening of the Casino.