My memories of Canvey Island

My name is Jeff Thomas and I am 73 (2008). I used to live in Tilburg Road on Canvey during the war but left about 1946 to move back to London. I was there during the great flood of 1953 but was staying on a houseboat in Benfleet near the station. I believe the little creek is now closed. I can remember the Canvey connecting bridge being completely submerged on that stormy night. 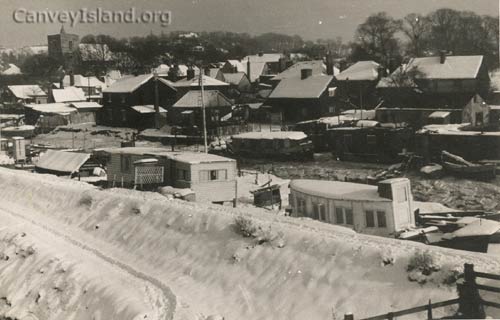 Jeff stayed in one of these Houseboats in 1953, pictured here in South Benfleet Creek during the harsh 1957 winter

I am trying to find news of a cousin of mine that I haven’t seen since about 1983 or thereabouts when I last visited the Island. Her maiden name was Patricia Watts (Patsy). She was married but I don’t know her married name. Her husband as far as I remember was in the oil business, perhaps oil rigs in the North Sea. Her Mother was in an old age home just off Denham Road I think [Little Gypps?]. Her name was Doris Watts (my Aunt). Has anyone any idea how I could find out if she is still on the Island?

I certainly can remember many things about Canvey during the war. I have relatives laid to rest in the old churchyard, like my grand parents, Abel and Hannah Thomas. If anyone would like to get in touch by e-mail they can (see bottom of page).

At the moment I live in Cape Town. I have been here since 1967, but have been back to UK several times since then. Last time on Canvey was about 1983 I think.

I was at Benfleet on the stormy night in 1953 when the seawall was breached. Of all the names I have seen on the website pages none of them are known to me! The only name I knew was a Jackie Watts who apparently now lives in Spain but the dates she gives are much too late to be connected to my cousin Patricia Watts who I said I would like to contact. She lived in a house named ‘Dunroaming‘ in Thisselt Rd which was near Lakeside at the top end of that lake that stretched back towards St Katherines church. 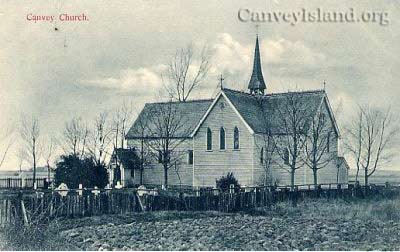 I lived on Canvey during most of the war years in a house in Tilburg Road called ‘Doranne‘ made of wood and polite, long since demolished although it was there in about 1983 as I visited my uncle ‘Jack Thomas‘ there. My Grand Father and Grand Mother are buried in St.Katherines Church cemetery, Abel and Hannah Thomas, towards the rear left of the church. Last time I was there in about 1983 the gravestone was a bit skew. I hope some maintenance has been done since then!

As for memories. I can remember the many flying bombs (V1) coming over during the war, we used to dive into the shelter when we heard them coming and the siren going. The local Spits from Hornchurch would try and shoot them down but they were very fast. If not, dive on them and turn them over with their wings. One night a ‘Gerry’ bomber dropped a stick of incendary bombs on the Island and that did a lot of damage with fires. Perhaps some of your site readers will remember this? Almost every night the local gun battery would open up on the V1’s or bombers coming over! As children we used to chase after the loose barrage balloons when they often came down.

Many a happy day was spent in the cornfields in the centre of the Island looking for snakes!

My Father was in the Fire Service on the Island at the time. He had a friend named Jimmy Cotton who was quite an artist and who painted local scenes. I have one in my lounge today called ‘Canvey from the Downs’ painted about 1950. It seems to have been done from somewhere near the top of the road called Hadleigh Way. Is this name correct? [Now Essex Way] There was a water tower at the top.

Another memory I have of Canvey was the green and cream buses. As a kid we used to ride the whole length of the Island from Leigh Beck to Benfleet, especially on one old bus we called ‘Groaner‘, and we were most upset when one day it crashed at the place where the Winter Gardens path joined the main road near Benfleet never to run again. Just like the old bus us kids were very upset when the fastest taxi on the Island crashed near the Dutch Cottage. It was a black Ford Pilot V8!!!

Memories like the boat rides that used to go out and around the Chapman lighthouse. Days going out at low tide collecting cockles on the mudflats off the Point at Leigh Beck.

Perhaps someone can remember the day that a returning bomber came down in the mudflats off the Point [The B17]. I actually saw this and the crew baling out. I don’t know how many survived as it was a windy day and some got blown out to sea.

Just a few more short memories from Canvey in the early 50’s before I was 17! Somebody may remember these. 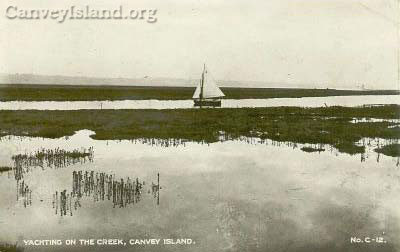 The coasting barge wrecked(?) on the saltings near Smallgains creek called ‘Harvey‘. We used to play on it as kids. My cousin (another one) and I used to sail his yacht from the yacht club on the creek. Once we sailed completely around the Island, it took all day! Other times we would sail to Egypt Bay on the other side of the Estuary. I will never forget the time we capsized off Canvey Point. We found ourselves clinging to our upturned boat in about 40ft. of water. A friend of ours had drowned some years previously in the same area. (His name was Derek Williams and he is at rest in St Katherines cemetery too). It was a windy day and high tide. Our whole lives flashed before us and I remember thinking I was only 17. We stripped off down to our underclothes and decided to swim for it about 200 yds to the seawall on the north side of the creek. There were no other boats to help us so we swam like never before !!!. We swam together and found that when we decided to check where the bottom was we found we at that time we were swimming in 2ft of water only knee deep. We burst out laughing. We managed to borrow some funny old clothes so we could get home by train to London!

Another memory was when swimming at the sea front we always waited for the Eagle Steamers to come past going to Margate and Southend Pier. They were very fast and left behind a lovely wake which one could almost surf on when it reached the shore! 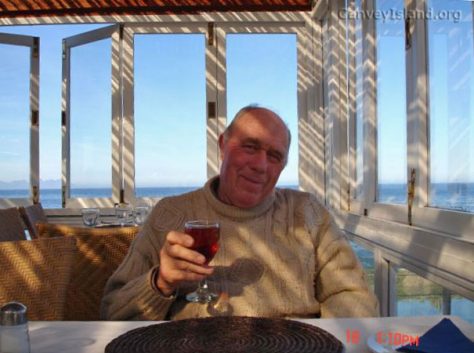 I previously said I lived in Tilburg Road. This was not too far from Cooks Farm, just across the lake (does anyone remember that). As a kid I loved to ride with the farmhand when he was delivering the mornings milk to the pickup point on a nearby road. We were pulled by a lovely big black carthorse.

The Photo is me enjoying some SA red wine before my lunch in a seaside restaurant near my home. Note the sea in the background and the mountains in the distance across False Bay. If you read this and any of your readers would like to comment please give my e-mail address: menagerie @ mweb.co.za

[If you can add any memories please leave a comment below] 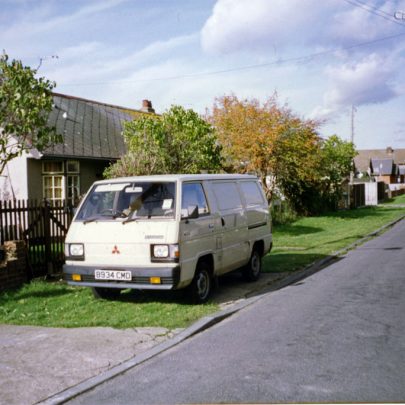 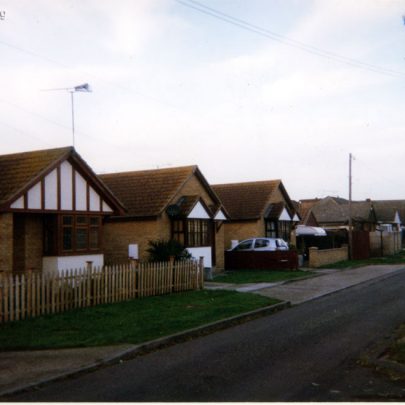 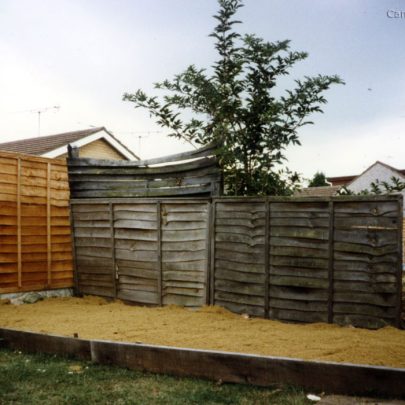 Tilburg Road: The Roof Tiles of 'Doranne' preserved in this patio
Graham Stevens