My Memories of Nightingale’s Store

I moved to Canvey in 1936 with my parents, Ted and Grace Nightingale, and my older sister Barbara. We lived in Mayland Avenue and my father worked in London for the Anglo Saxon Petroleum Company, a subsidiary of Shell. In preparation for the outbreak of war, the company evacuated its business to Plymouth, it clearly wasn’t expecting France to fall. We left Canvey at midnight on 2nd September, traveling by a taxi driven by Albert Mercer. He stopped for fuel at Exeter and was informed that war had been declared. We lived in Plymouth for three years, during a time when much of the city was reduced to rubble, and returned to Mayland Avenue in 1942.

Soon after the war, my parents bought Walkers Stores, on the corner of Long Road and Denham Road. This must have been around 1946. Rita Walker, the daughter of the previous owners, continue to work in the shop for a time. In 1949, as the shop was becoming too small for the trade, my father decided to have it rebuilt. This led to the large two-storey building that is still standing in Long Road today. A large Nissen hut was erected behind the old shop and trade was conducted from there during the months of the rebuilding.

The new shop consisted of a general store, small butcher’s and greengrocer’s and a cafe. The butcher’s shop was let to Neville Trot and the greengrocer’s was run by my dad and my brother-in-law, Andre. I looked after the main store and my sister, Barbara and my mother, ran the café. Barbara and Andre married in 1944 and lived with their growing family in the bungalow behind the shop in 1 Denham Road. I particularly remember Ray Howard coming to the shop when he was a young boy.

Upstairs in the shop there was a function room, often used for wedding receptions, including my own in 1953. On Sundays it was let out to the Methodist Church, before they had their own building, and also the Spiritualists. We also had living accommodation upstairs, including two bedrooms. After we moved into the new shop, the Nissen hut was let to the Food Office, as rationing was still in progress for many years after the war.  At that time, we served two course lunches for the princely sum of 1s 9d.

We had several clients from the Council Office, which was just along the road at that time. It was still Canvey District Council, before becoming Castle Point. My father served on the Council for many years and was elected as Chairman of the Council a few month after the flood.

Nightingale’s Stores during the floods. The Nissen hut can be seen at the rear of the shop.

On the evening of the flood my parents had been to the opening of the War Memorial Hall and, when they arrived home, remarked what a bitterly cold night it was. Soon after midnight we were awoken with somebody knocking on the door to tell us the Island was flooding. We had several inches of water in the shop, but luckily it had been built on raised ground, so did not get as much as the surrounding properties. The next morning, I drove my mother, my future mother-in-law, my sister, Barbara, and her three young children to my Aunt’s house in Barking. This was before the days of seat belts and baby seats and everybody just piled in. By the time I reached Benfleet, having driven through some deep water, I realised my brakes no longer worked! My aunt was most surprised to see all these people, as news of the flood hadn’t reached her, as we had lost our telephone communication on Canvey. She somehow managed to accommodate us all. The next morning my mother and I returned to the shop, to help clear up and supply refreshments to the many helpers who had arrived and serve the few customers who were still around. 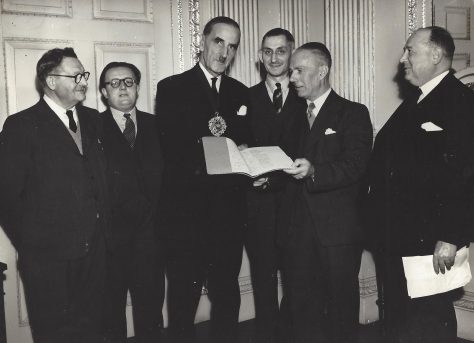 Ted Nightingale presenting the scroll from the people of Canvey to the Lord Mayor of London. Local journalist Fred McCave is on the left.

A short time after the flood my father, in his role of Chairman of the Council, visited the Lord Mayor of London, Sir Rupert De la Bère, taking a scroll from the people of Canvey thanking him for the help they had received from the Flood Distress Fund that he had set up. The scroll read:

We the people of Canvey Island wish to express our sincere thanks for the help we have received from the Flood Disaster Fund inaugurated by Your Worship. Through you we would thank all those people of many countries and our own for their generous assistance. Our burdens have been lightened by their help. To you, sir, and to them we shall always be grateful.

Seven weeks after the flood Brian and I got married at St Katherine’s church and had our reception in the function room above the shop. Some of our photographs were taken downstairs and the stains of the flood water can be seen on the wall.

Brian had lived on Canvey since moving from Brixton in1930 with his elderly father, Thomas, and his mother, Louisa Grace, who lost her sight when he was a young boy. His father died the year before we were married. His older half-brother, Herbert – but known by the family as Sonny, was a postman on the Island at the time of the floods and is one of the forgotten victims of that tragedy. He died just two weeks later aged just 58. 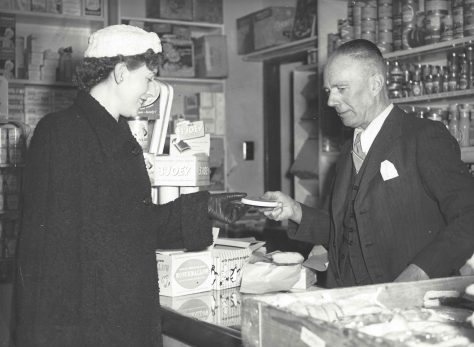 Ted Nightingale serving a customer in the shop – does anyone recognise her?

In 1955 my father retired and the shop was taken over by the Co-op, two months before the birth of my first child. Coincidently, Sonny’s son, Harold – but known as Bill, became the manager at the Co-op store in the 1960s.