My Mother's memories of Canvey

My mother and her family moved to Canvey Island from Laindon, Essex  some time in the mid 1920’s. Her Mother’s name was Mabel Elizabeth Adams and her father was Frederick William Adams. She had three older brothers, Stanley, Laurie and Arthur. My mother’s name was Ivy Adams. They all rented a furnished bungalow about 10minutes away from Cox’s Hotel.  The bungalow was called “Cosmo”.

She remembers that in those days there was no electricity, gas or water on Canvey.  They had rain water tanks to catch the rain but had to walk across to the local dairy with their bucket for water for drinking at a few pence a bucket.  She remembers her mother cooking in a little oven that sat on top of an oil lamp. A few years later her brother Arthur was hired to put up the first electricity poles on Canvey. 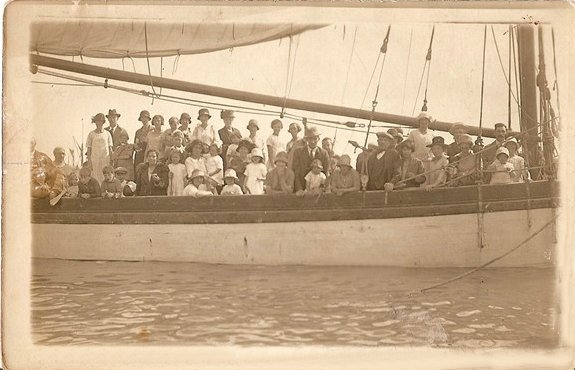 She remembers going to a local hall when she was very young, called Whittier Hall, where magic shows were performed.  She went to a convent school in the early years but cannot remember the name of the school on Canvey.  She remembers a  pleasure boat that took you for a ride across to Kent.  I have sent you a picture of the boat.  My mother is sitting in the front of the boat just left of centre (the small child with a white hat), with her mother on her left, also wearing a hat.

When they first arrived on Canvey Island her dad, Frederick, walked around Canvey looking for work.  He went into Cox’s Hotel and said he was looking for work, and would do anything at all just to get a job, even sweeping up.  He was given a job at the Hotel, doing odd jobs etc.  At this time, My mother was around 8 years old. 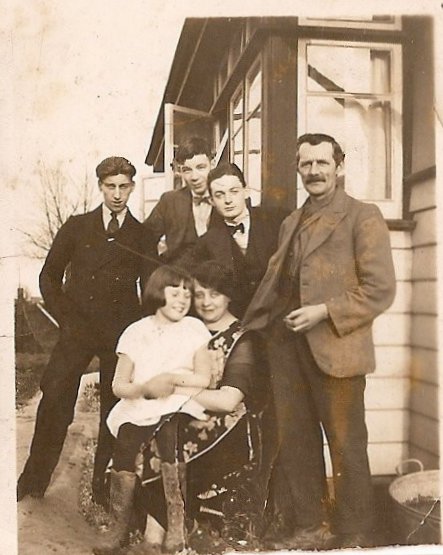 Outside their rented house “Cosmo”

At some stage whilst her father Frederick was working at the hotel, he mentioned to his employer that he did some work some time back as a Chef at Nightingdale’s Hotel  in Great Yarmouth. He was then asked if he would like to work in the kitchen at Cox’s hotel as a chef, she remembers his white apron and chef’s hat. During this time her mother Mabel was hired to make up the beds and her brothers  Stanley and Arthur were working at the tables, her other brother Laurie helped out in the kitchen.  She remembers her brother Laurie being in the kitchen using some sort of cutting machine and cut the top of his finger off.  As he looked down and saw the blood, he flopped down onto the floor in shock, he was ok though.  The picture below is of my mother as a child sitting on her mother’s lap, her Dad is on the right of the photo and to the left of her Dad, her brother Stanley who died in 1930 aged 21.  The two other men are friends of her brother.  They are standing outside their rented bungalow, I believe to be “Cosmo“.  This would have been around the time that her Dad worked for Cox’s hotel.  These photos were taken in the 1920’s.

In the gallery below is another photo of her Brother Stanley (on left) with a friend, standing near the beach at bottom of Seaview Road in the late 1920’s.

After Mum’s dad had worked for a while as a chef at the hotel, he felt he wanted to go back building again, so left Cox’s hotel, all went well for a while so Laurie left to help his dad out with the building and not long after that her mother also left along with Arthur.  Her brother Stanley left a short time before his Dad as he became ill.  The Doctor told him that he had a “spot on the lung” but not to worry. He had TB.  From that time onwards Stanley used to visit a Sanatorium for two weeks at a time.  In those days doctors thought that the fresh air would help them get better. 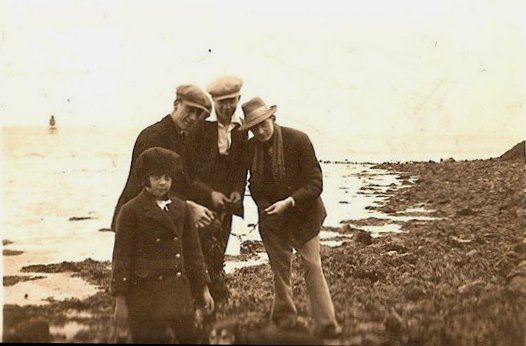 Canvey beach in 1920’s with lighthouse in distance

Another photo is enclosed of my Mother with her brother Stanley (on the right of photo), with his two mates at bottom of Seaview Road (you can see the lighthouse in the distance).

As her Brother Stanley’s health deteriorated, my Mother and her family found another place to rent next door to the Doctors surgery in High Street  in a house called “San Remo”. My mother would often visit the little sweet shop opposite San Remo to buy toffees for her sick brother. Toffees seemed to help her brother’s coughing. Her Dad nursed him through all his bad attacks.  Unfortunately he died in 1930, aged 21.  He was buried at St Katherine’s Church on the island. 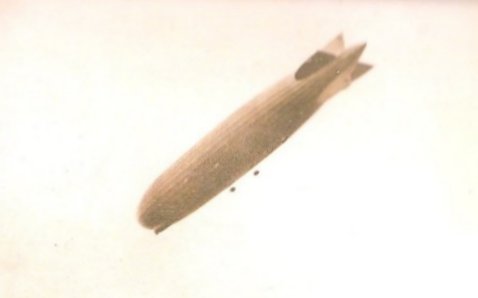 Again in the gallery below is a photo of Mum with her brother Laurie (camera at the ready) at Canvey Beach.

My mother’s first job in the 30’s was working on an open stall, selling sandwiches etc, called Clark’s at the bottom of Seaview Road.  She also worked for a time at The Commodore opposite the Jellicoe pub, also in the 1930’s.  She  started  work at Cox’s Hotel as a waitress in the mid 1930’s when she was about 18 years old.  She remembers the other waitress that worked with her was named Pat, and the chef at the time was called Tom (she cannot recall his surname). She remembers he was drunk a lot of the time. Sometimes people would complain about the food, burnt toast etc. He would look through the hatch and shout out  “Take it or leave it!!” Mum said that she hated it when this used to happen, got very embarrassed. Another picture in the gallery is of Mum dressed as a waitress (she is on the left), Tom the Chef in centre and the other waitress Pat on the right. 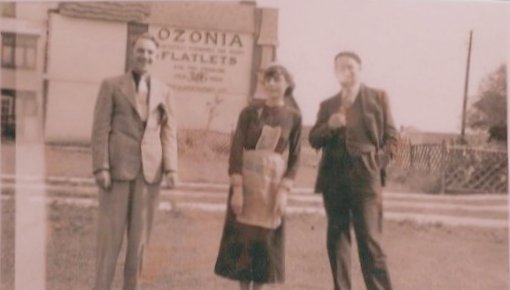 The photo on the right is of Mum as a waitress again.  I am a bit confused regarding this one.  Although she is dressed in the Cox’s hotel uniform, there is an Ozonia sign behind her, may be just a coincidence.  She remembers the two hotels were close together. She thinks  the two men in the photo are the owner and manager, she is not 100% sure.  May be one of your readers will recognise them.

Mum worked for Henry and Hilda Goodhind  at the Ozonia Hotel in 1937 also as a waitress.  She remembers another lady that worked there in the office, she was just called Ms Stannard.  Ms Stannard lived in Benfleet with her sister and used to travel to Canvey each day.  I have sent a photo of Ms Stannard with my mother.  Miss Stannard is on the left of photo.

Mr Goodhind used to run the grocery shop at the hotel also.  Apparently he was a “saucy devil”, very flirtatious according to Mum.  She remembers Mrs Goodhind always at the sewing machine making her own clothes, she cannot remember her ever working in the hotel. All the rooms in the hotel were painted different, says that most people who stayed liked to sleep in the “Devils Room”.  A devil was painted on the walls along with flames.  She worked there when the war was on, remembers there was a searchlight at top of seawall near the Ozonia Hotel keeping a watch out for the Germans.  She became friendly with a couple of soldiers that used to visit the Ozonia Hotel for something to eat and buy cigarettes but nothing too serious.

She remembers the lighthouse man used to wait until the tide was out before coming across to the Ozonia hotel to buy his tea, coffee and groceries.  He often stopped for a cup of tea at the same time. 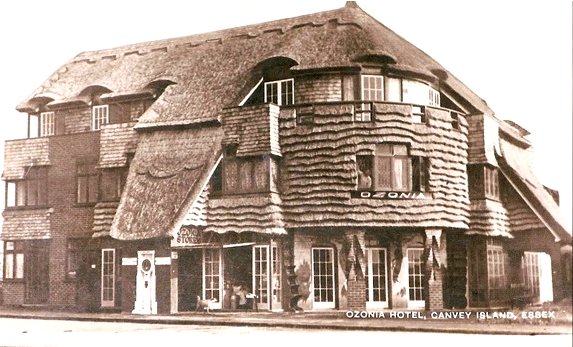 I have enclosed a photo of the Ozonia Hotel that my Mother has, it is slightly different to the one on your site.  This photo you can see has a dog in the foreground and also someone leaning out of one of the windows in the hotel.

When she left working at the Ozonia Hotel, she was given a reference letter by the Manager, Mr Pierre Jeanneret.   Below is a copy of that letter.

In 1939 her father Frederick died.  He had been working in the building industry most of his life and died from an “asbestos” related disease. He was buried in the same grave as her brother. Below is a photo of my Mother with her mum and dad, shortly before her father died.  At this time they were renting a house called “Arcadia” in Handel Road.

Some time after the Ozonia Hotel closed down,  My mother moved to Elm Park in Essex with her mother. She remained in Elm Park in Essex, got married to my dad, then we all moved back to Canvey Island again around 1950 along with my brother. Below is a photo of us by Canvey beach in the early 50’s. It is of my mother, my auntie Margaret, my brother Barry, my sister Nesta (in pram) and myself.

Now, myself, my husband and two children including my 90-year old mother, all live in Australia. 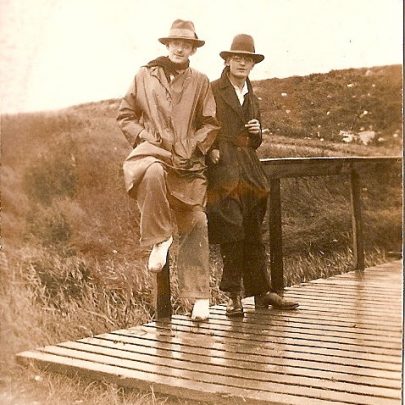 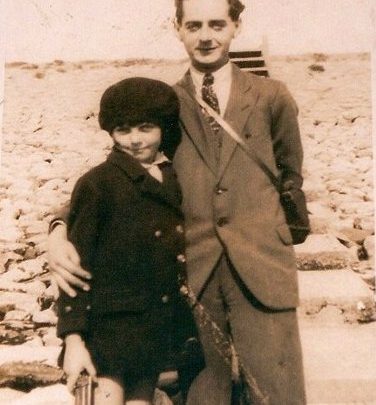 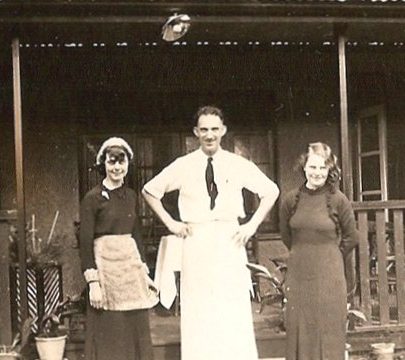 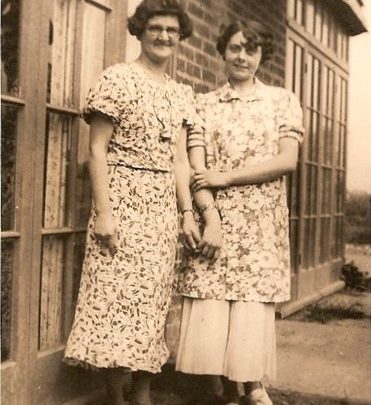 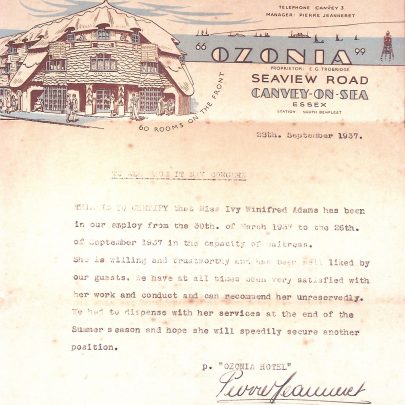 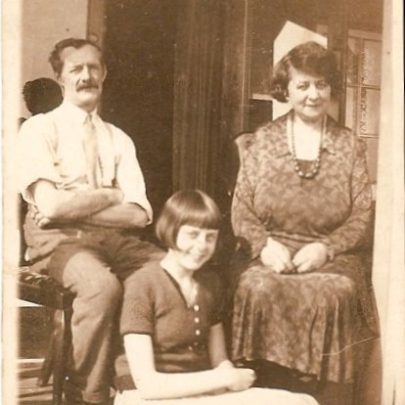 Mum with her parents 1939
Moireen Murrell 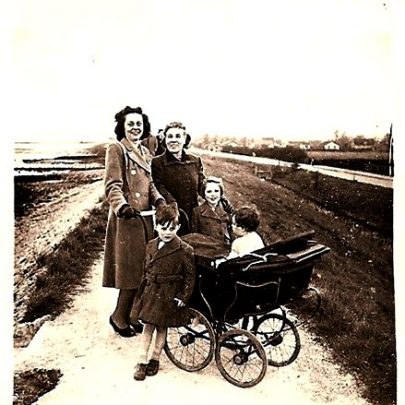