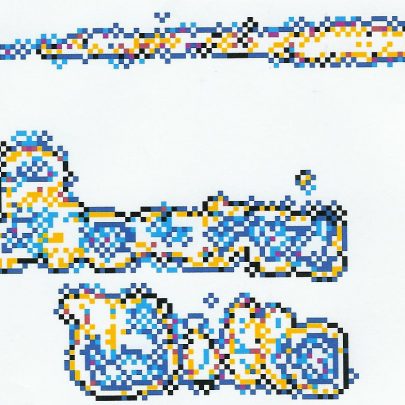 I had been attempting to post these comments below David Bullock’s original posting but had trouble loading the images. I have been playing around with the clipped download of the bungalow name and the best I’ve managed so far is posted here: My best interpretation of this would be “Beniti” “Baniti” or perhaps “Boniti” Villa. It is not a name I am familiar with, but I hope it might trigger some memory of other site visitors and help pinpoint its location and perhaps the identity of the occupants from the photograph. During my experiments, I came up with the second image. For a while, I considered the bizarre possibility that the bungalow could have been “Banzai Villa”! I ran a Google search for “Banzai Canvey” and found a surprising number of hits. During a quick browse of results, I stumbled upon a reference to the island that might be of interest to Canvey historians. In MCMXI, which I interpret as 1911, Messrs John Lane of London published a tome entitled “Japan For a Week (Britain For Ever)” by one A. M. Thompson. At page 49, during a discourse upon the blurring of national and racial characteristics, he comments “…the true Dutch type that Teniers painted is preserved in native purity at Canvey Island for the exclusive benefit of Southend trippers;”. Lucky old Southend trippers, I think I met a few in the sixties! This book can be read in its entirety at: archive.org. I had a quick search for any connection between Mr Thompson and Canvey Island, but to no avail.

I’ve had a further wrestle with the higher resolution file sent (psd is fine).  Added are two further variations on a theme for your consideration (smaller images). I now tend to agree with Graham Stevens that the first letter is an “R” rather than the “B” I originally considered. It now seems to me that the name is probably “Ranita” or possibly “Ronita Villa” although I am a little confused as to what is going on between the top left corner of the “a” (or “o”) and the “R”, although this could be caused by other factors than the signwriter!  I think this is the best I can do from the scan sent. It might be possible to improve on it with a higher grade scan and I’ll see if my son-in-law has some more advanced box of tricks that might help. In the meantime, I hope some memory is reawakened in the mind of residents of yore, or that some documentation come to hand, that might throw more light on the subject. I don’t know if it is possible to search planning applications or if such records are available, but might such be required if the property was demolished? I’ll be in touch if I make any more progress.