Over 80 years on Canvey 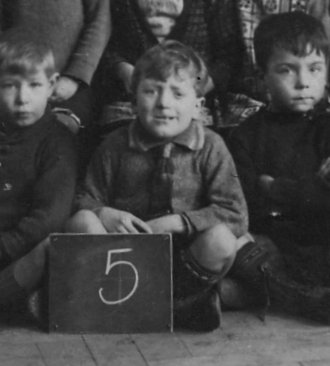 Richard Powell aged 5. Taken at his old school just before he moved to Canvey

Richard Powell was just five years old when he came to Canvey from Walthamstow. His parents William & May Powell bought an old army hut that had been built in 1914 where they lived for the next eight years.  With dykes, grass roads, no gas, electricity, water or sewers Canvey was a far cry from the built up areas of Walthamstow. But Richard only recalls the fun, excitement and freedom of his life when he moved to Canvey.

‘Crossing Benfleet Creek was a hair-raising experience if the wind was strong and the tide was going out’ recalls Richard in an article that was published in the local paper in 1976. ‘We used to buy our drinking water from a tap at Walker’s caravan (which was at Denham Road) and in the winter what with unmade roads and two buckets of water on a yoke you had to walk along planks that went across dykes. You needed a good sense of balance’. Richard had two jobs, he was a paper boy and he also charged accumulators at 6d a time including collection and delivery. 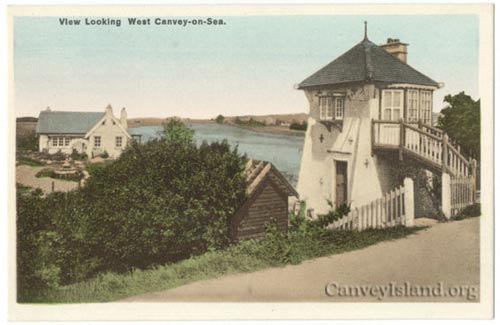 The bungalow where Captain Gregson lived with the Lighthouse he is said to have built for his mother-in-law. The bungalow became the Oysterfleet Pub

Richard remembers Captain Gregson who lived in the bungalow at Oysterfleet that became the original Oysterfleet Pub.  Captain Gregson had been in Africa for many years and his bungalow was full of Lion and Tiger heads, African spears and other memorabilia. Richard used to play there when he was a boy.

In about 1935 they moved from the army hut to Grafton Road where Richard’s father died in 1936, the result of the gassing he received in WW1. Richard went on to work for Hooton’s Stores where the Canvey News was first printed.  Working as an ink boy he was paid just 10 shillings a week. He says he got more ink on himself than on the rollers.

When he was 16 he joined Fielders Army manning the 6in guns at Scar’s Elbow when war broke out. He recalled the following in the local paper. ‘One night a light was seen in Kynoch’s Hotel and the men were told to charge it with rifle and bayonets. It turned out to be the moon shining on the window.’ He goes on ‘Another time we fired a ship across its bows to stop it. I think we hit the funnel and the crew were not too pleased about it. They came ashore for a punch up. In the end we won’. 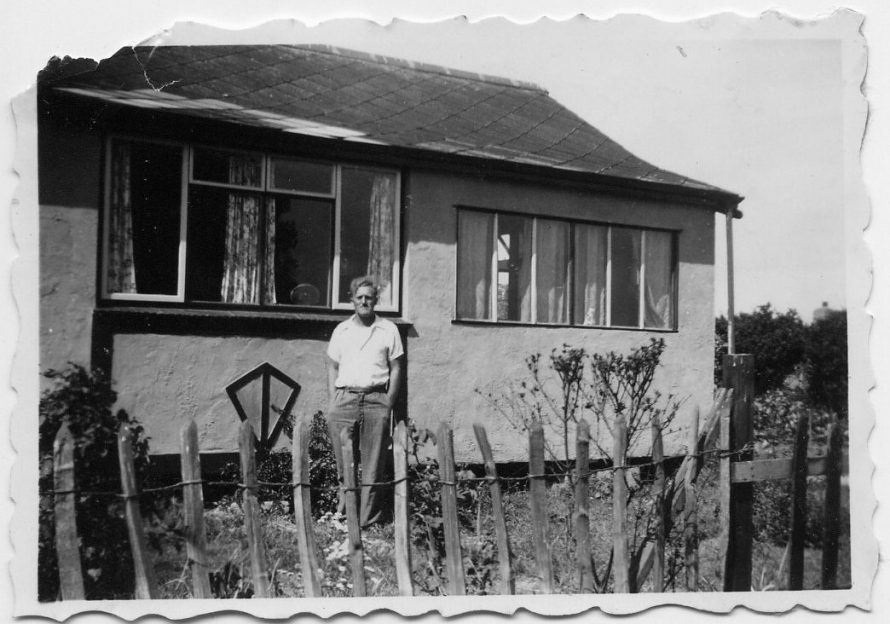 After being demobbed in 1948, Richard bought a bungalow called ‘Rhy Hall’ in Delfzul Road for £500. The original bungalow had quite extensive grounds which were later developed. ‘Rhy Hall’ itself was rebuilt and is the bungalow where Richard now lives.

About the same time Richard came across a car for sale. Not unusual but this car he had seen before in 1931 when the Colvin Bridge was opened. He had been taken there with the Sea Scouts to watch the opening and this was the first car to cross the bridge. 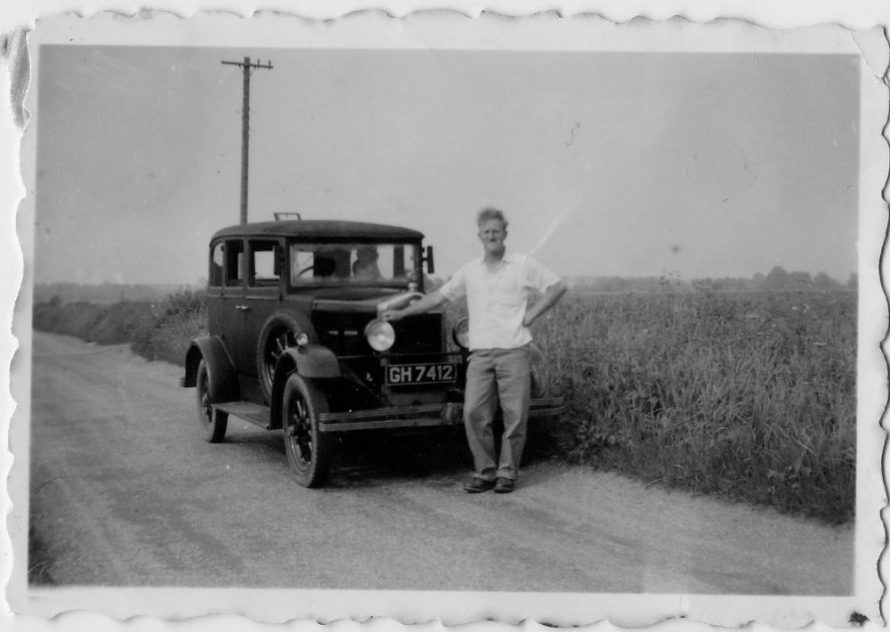 When he had the chance to purchase it at £10 he just had to have it. As you can see he looks very pleased with himself.

During the floods Richard was among the old islanders who stayed to help with the rescue. ‘I think it was Mr Peter Clark and myself who rescued the last two old ladies left on the Island. We rowed a boat down Sydervelt Road and found them in a bungalow in Tongres Road, 12 days after the Island was flooded.’ Richard said the Armed Forces were magnificent and with their help the sea wall took just two weeks to complete.

In his article in the paper Richard also comments ‘The biggest night-spot on Canvey was Price-Powell’s Small Gains Club.  The rules were very strict – no admittance without a tie – even the chef wore a tall white hat. The entertainment was provided by Conny Willy on the piano and Stella Gee doing a song and dance act’. 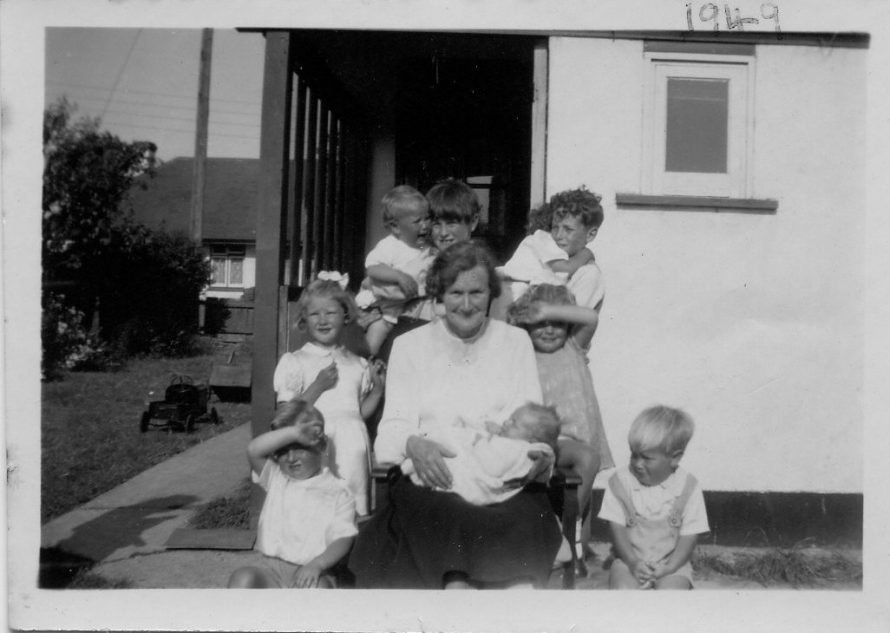 Richard’s mother May and her grandchildren taken in 1949

Richard’s mother was May Powell, as well as bringing up her family and working in a cafe she also became a Canvey Councillor. This was at the same time that Horace Fielder was on the Council. I understand he was the last Chairman of Old Canvey Council in 1957.

Does anyone remember Councillor May Powell? 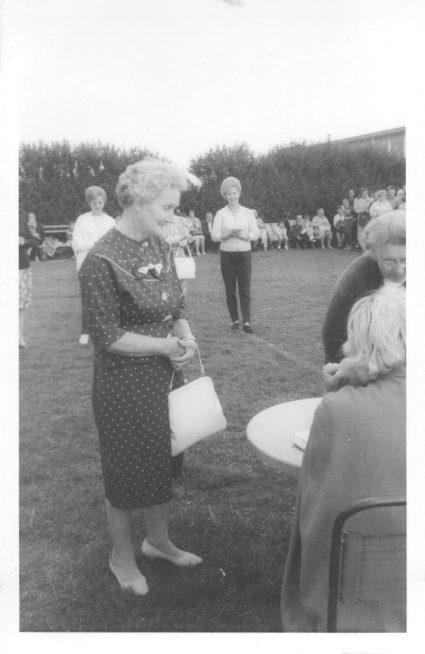 May’s family has been traced back to a connection with the Sheriff of Nottingham.  In later years May was living in Hawkesbury Road where she died at the age of 88.

Richard worked as a Commissioner (Building Inspector) for Canvey Council from 1963 to the mid 1970’s. He also worked for Fielder, building the chalets at Thorney Bay Camp.

Richard remembers there were several farms on the Island when he was young. Leeches Farm at Waterside were mainly sheep.  Cooks Farm at Oysterfleet. Chambers Farm in the Thameside Crescent area. Whites Farm at the Lobby. Also Whites opposite Hawkesbury. Scars Elbow at Fielders Camp and there was another farm at Leigh Beck pass the buses and shops.

Recalling the days he used to go out on the fishing boats he gives this piece of advice.

Never take a woman on a fishing boat on a Friday.

The Skipper took his wife out with them for the day. They started trawling lost all the gear and nets worth over £100. Richard put it down to the Skippers wife being on board. He lost his job as the Skipper had to sell up. The boat was sold to someone in Jersey.

Richard also recalls the Leggit fishingboat that was run by two brothers, during WW2 they were fishing off Whitstable and caught a Spitfire. They managed to get a rope around it and brought it ashore.

Peter Went ran the Lobby in the late 1930’s and the Buffalos had a group upstairs there for years.

After Richard retired he took up painting. Most of his paintings were done on hardboard and at one time filled his garage. I have seen a couple that he has hanging in his living room, they are very good. (They can be seen in the newspaper clipping below) He is now writing a novel, but no amount of coaxing could persuade him to tell me what his novel was about. Perhaps I shall be going back to interview him when he is a famous novelist.

I am sure there is more Richard could tell us. It is very difficult to get 80 years into a short story. I would like to thank Richard very much for taking the time to speak to me.

Richard’s wife Edith Bone comes from an old Canvey Village family and you can read about them here.