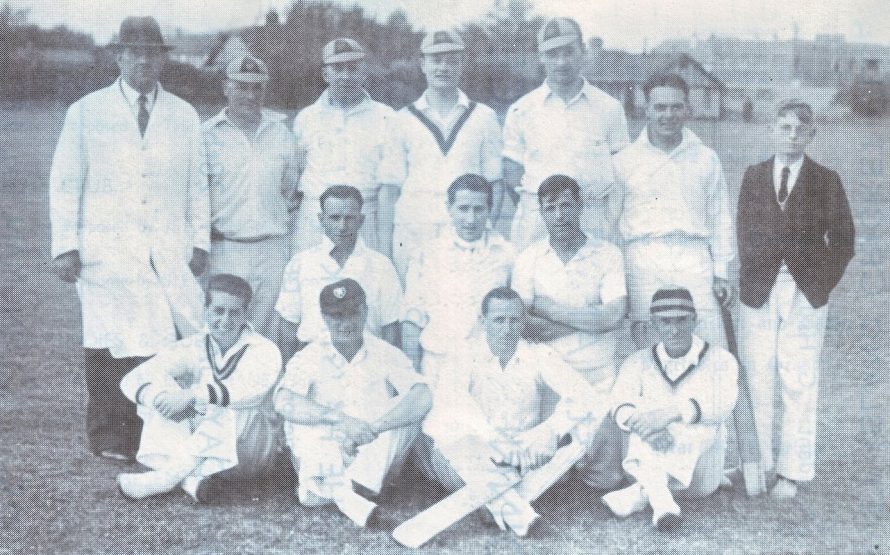 In the early 1930’s the owner of the popular and flourishing “Haystack Public House” was that well known local figure – Henry J. Dellaway. He lived in a fine bungalow with large grounds known as “Redroofs” which was situated at the south eastern end of Long Road, almost opposite the “Haystack”, and next door to what is now the Haystack Car Park. The next bungalow to the west was “Warrawee” owned and occupied by Canvey’s first chemist Mr. C.P.S. Venables. Both properties now being demolished. Incidentally after “Warrawee” was vacant land, then the bungalow, recently demolished, and now forming part of the Conservative Club car park which was owned by Kate Carney, the music hall star.

Henry Dellaway was a keen racegoer and owned and ran race horses at Newmarket. Behind “Redroofs” was a large field, owned by him, and round which he constructed a white wooden railed fence. He stabled some of his horses in stables in the grounds of “Redroofs” and exercised them round the railed fence. In consequence this field became known as “The Paddocks”. The eastern boundary of “The Paddocks” was formed by the dyke bordering the farm house and long black milking sheds of George Chambers’ farm in Furtherwick Road. The southern boundary was the dyke behind the properties in The Driveway, which at that time had not been constructed. The western boundary was a smaller dyke between the Conservative Club and the Drill Hall in Runnymede Road.

In the mid 1930’s Henry Dellaway ceased to use The Paddocks for his race horses and the wooden railed fence fell into disrepair. A group of local business men who were keen cricket lovers being anxious to form a local club felt that The Paddocks would make an ideal cricket pitch and asked Mr. Dellaway for the use of this site. He agreed provided that they developed the ground at their own expense. The first task was to lay the square and this was sited in the middle of the field roughly where the main hall of the present The Paddocks community centre is now situated. I believe that the club spent about £200, a not inconsiderable sum in those days, on laying Cumberland turf to the square, the wickets being sited east to west.

Being local tradesmen they decided to name the club The Canvey Island Trades­men’s Cricket Club, and played on some Thursday afternoons, being early closing day, and Sunday afternoons. The club colours were blue and yellow. The caps being dark blue with a yellow frontispiece. The enthusiasm was tremendous. Wednesday evenings nearly all the members would turn up for practice and to maintain the ground. A rota was formed of members to be responsible for cutting out and marking the pitch on match’days.

The next task was the provision of a pavilion and store which took the form of a wooden hut about 12 feet square with a hinged front piece, sited on the southern side of the ground a little to the west of the site now occupied by the children’s swings. In this hut the wives and girl friends of the players made teas and sandwic­hes for all the players on match days. The only problem was the supply of water, which was solved by extending the water supply from “Warrawee” and constructing a water point with an iron cover in the ground behind “Warrawee”.

The founder members of the club included George Foley the local plumber who had his business at the junction of, Foksville Road and Furtherwick Road (now part of the shopping town centre precinct). Stan Ewins, whose wife ran the hair­dressing salon “Lilian” in Furtherwick Parade. Eric Crane, local Solicitor (now Beecrofts). Rupert Ives who operated from his shoe shop in Furtherwick Parade, with his famous slogan “Put Your Feet in my Hands”.Fred Scholes the first captain, and Jimmy Knox.

The club enjoyed the support of many local well known businessmen and person­alities. The president was George Chambers (later known as Grandfather Chambers to distinguish him from his son Horace and his grandson George). The chairman was Charles Vandersteen a local fishmonger who operated from Furtherwick Road (now the Island Fisheries). Amongst the vice-presidents was Charles Neale then the local bookmaker. Mr. E.E. Lawrence, Secretary of the A.M. Clark Estate and owner of The Canvey Supply Company. William Manthorp whose home at “Willalla” in Poplar Road was a well known local social centre, Henry Dellaway, Horace P. (later Colonel) Fielder, an estate agent, builder and later owner of Thorney Bay Holiday Camp. H. Price-Powell, a large local land owner and club proprietor. Johnny Longman the owner of The Mascot tobacconist and confectioners (now Sketchleys at The Haystack corner). Freddie Fisk a well known local builder who built the Maisonwyck Estate.

All the founder-members were good players. George Foley was quite an all rounder, Stan Ewins a good bat and more than useful slow bowler, Rupert Ives a very fine fielder and quite a hitter when it came to batting. They were joined by such players as Stuart Wright a good bat and fielder who became captain in the 1937 season; George Greenaway a fine fast left arm bowler; Don Mackay a stylish right handed batsman and useful change bowler. It was rumoured that the Essex Cricket Club had their eye on him. Whether true or not, he was a fine sportsman who later was to give his life for his country flying with the RAF in the War with Bomber Command. The pilot of his plane was Ronald Vandersteen one of the sons of the chairman, a fine athlete, particularly at running, who died in the same operat­ion over Germany. Sonny Hesketh an extremely fine batsman. Frank Darby – another fine bat. Don Acraman known as “Ackers” who kept wicket. Gordon Gilbert and Monty Ogle, two very good batsmen. Harry Manders a good fielder and all round sportsman, who like Don and Ron was later to lose his life on active service, and Charles Tew, a fiery bowler.

The remarkable player, in my opinion, of them all was ‘Old Man’ Jones, a very crafty left-arm bowler. He was 60 if he was a day, yet regularly took over 50 wickets a season. In the 1938 season he took 62 wickets at a cost of 5.08 runs per wicket. The teams that Canvey played against were mainly from the London area such as Mildmay Ironworks; Anglo-American Oil Company; Silverthorn (from Silver Town) : Cavaliers; Melody Makers (which included some of Geraldo’s bandsmen) the London Passenger Board Garage from Loughton; Ilford Sports Club, Bata Shoe Company. The visiting players would bring their wives and girl friends and children who would go off and spend the day on the beach whilst the men played cricket. All joining up for tea with both teams which were friendly social occasions. 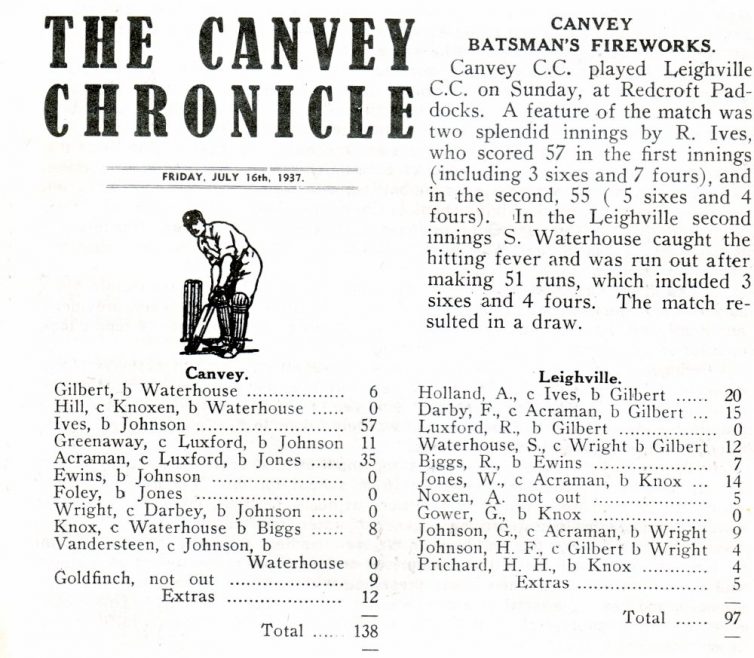 Of course some local teams were included in the fixture list such as Leighville, which at the time were one of the strongest sides in the Leigh/Southend area, Bob Mann’s XI , comprising well known players from the mainland, and Chelmsford Police. The games against Leighville were always very keenly fought affairs and many friendships were formed amongst the players from the two seams. The away matches against the Police were played on the Chelmsford Cricket Club Ground which is now the headquarters of the Essex County Cricket Club. The Police were invariably captained by Sgt. Joslin who was then stationed on Canvey, and one of his sons, Peter, is now Chief Constable of Warwickshire.

There was a tremendous spirit in the club. George Foley and Stan Ewins were two of the biggest jokers and leg-pullers I have ever met, and their pranks were always taken in good part. Although there was a lot of fun and laughter play was taken very seriously as evidenced by the fact that in the 1937 season the team played 20 games, won 15 of them, and lost 5.

Of course there were the more sober and sad moments like the time when Monty Ogle who played in spectacles, was hit full in the face by a sharp rising ball whilst batting. There was glass and blood everywhere. He was rushed to the doctor and we all feared for his sight. Fortunately he was alright.

Then there was the very sad occasion when Howard French, an occasional player and a relative of Henry Dellaway, died tragically and suddenly just prior to a match. The cause was reputed to be attributable to some whelks he had eaten. Whether true or not his death stunned the whole team.

The wickets were pitched east to west and the western wicket was about on the stage of the main hall of The Paddocks community centre. The aim most batsmen when standing at that end was to hit the ball out of the ground over the dyke and into the Farm House and black milking sheds of Chambers’ Farm (now Rio Cinema, Paper Shop and the Job Centre). Only two men ever achieved it – Harry Manders and Rupert Ives, although Stan Waterhouse, nicknamed ”Melon” came very near on several occasions.

The first annual dinner and dance was held at The Haystack Hotel on Jan­uary 28 1937.The event was attended by all the club officers, most players, president and nearly all the vice-presidents. It was a glittering occasion and its report took up a lot of space in the local press at the time.

Perhaps in conclusion I may be allowed to explain my own connection with the club, In the summer of 1935, I was 12 years of age, and as keen on cricket then as I am today. One summer evening of that year I saw the activity of the cricket practice going on in The Paddocks and wandered over to see what was going on. I soon became involved in the activities.

At the start of the 1936 season I was appointed official scorer to the club for the Sunday matches (occasionally I got off from school for the Thursday matches -specially if they were away). In addition, at home matches, I had to get in the water to prepare the teas (carrying buckets of water from the point behind “Warrawee”, and look after the children whilst their mothers prepared the tea). At the first annual dinner and dance I was surprised and honoured to be invited as a guest and even more honoured when I was presented with a silver medal inscribed with my name and bearing a motif of a cricketer for my services to the club. This medal together with a photograph of the team in 1937, taken behind “Redroofs” are two of my treasured possessions.

Although the club operated in 1939 the fixtures were seriously interrupted by the outbreak of the second World War which meant the end of the club that had started with so bright and promising a future. Canvey at the end of the War in 1945 was a vastly different world to the carefree days of 1935. Little did I dream though that some 37 years later in 1972/3 in my capacity as Deputy Clerk of the Canvey Island Urban District Council I was to play a part in a team of officers and councillors in planning and constructing the present The Paddocks community centre on the site of the old Canvey Island Tradesmens’ Cricket Club ground. I never enter The Paddocks without, in my imagination, hearing the sound of willow upon leather and hearing the voices of Stuart Wright, Stan Ewins, Rupert Ives, George Greenaway, Don Mackay, George Foley, Harry Manders, ‘Old Man’ Jones etc……………………………………..
~~~~~~~~~~~~~~~~~~~~~~~~~~~~~~~~~
Another fantastic memory from the Bulletin. 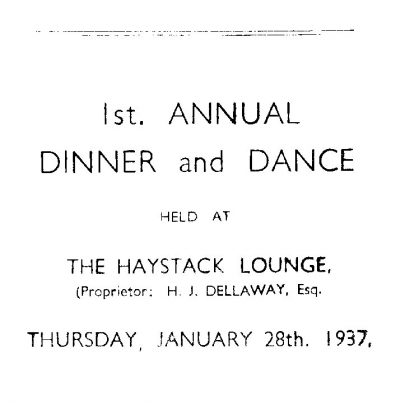 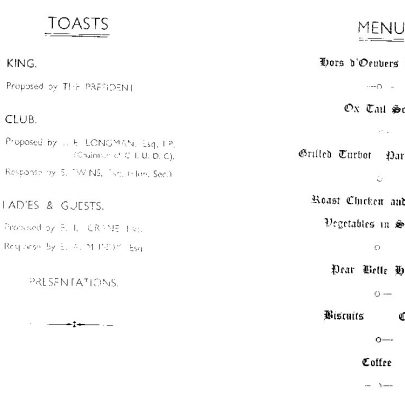 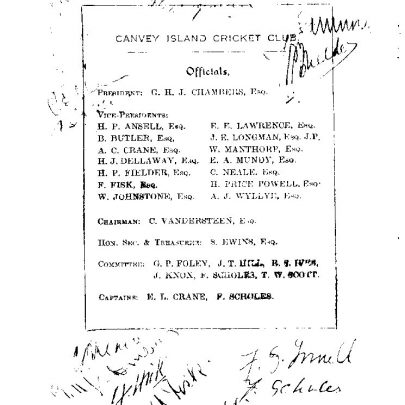