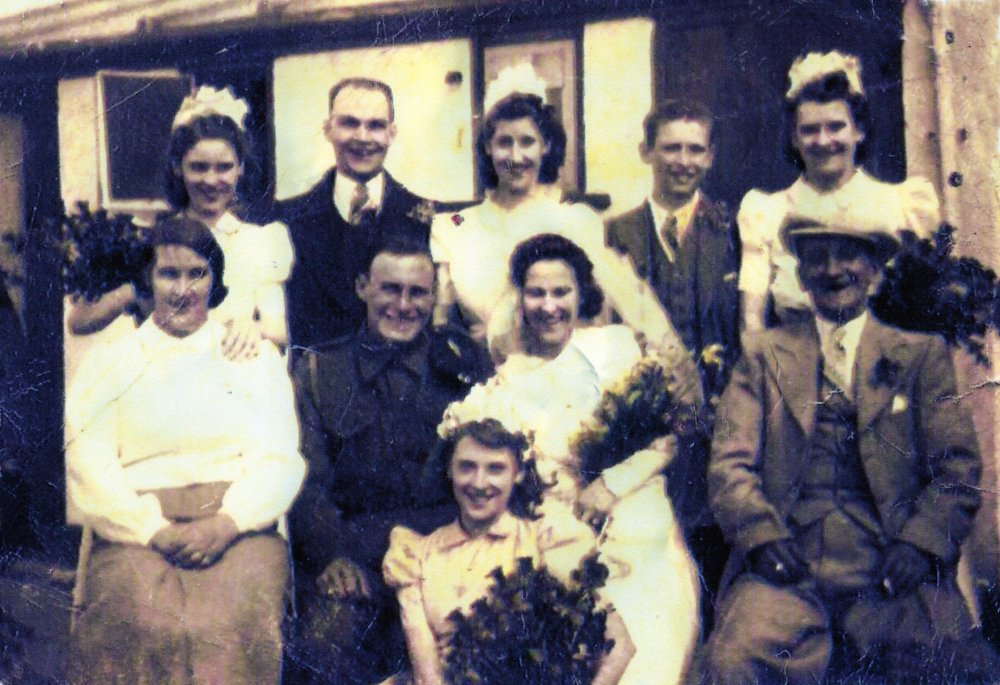 It was the fortunes of war that brought the Beare family to Canvey Island from London’s East End; a move which may well have saved many of their lives.

Born in 1925, Harry Beare was a lad when war was declared. He had recently left school and was working in a greengrocer’s shop when an enemy bombing raid commenced and a bomb landed just a few yards away destroying a large house opposite. Young Harry and his employer took cover in a dug out and during that enforced period of inactivity they got chatting about Harry’s family. Apart from Harry, Walter Beare and his wife had five other children, all daughters, living at home. Harry’s boss owned two bungalows on Canvey and he suggested that the family get out of East London and move into one of these homes that stood empty.

Harry recalls that he had never heard of Canvey but clearly Walter jumped at the chance to move his family to the relative safety of the Island. It was a decision which may have saved all their lives for within a week of departure their London home was flattened in another bombing raid.

Walter had taken his family to safety but he remained in the ‘thick of it’ as part of the Rescue Service pulling survivors out of collapsed buildings during the seemingly endless raids on London’s East End with its acres of docks. It was during 1941 that Walter was awarded his British Empire Medal for his bravery during one of these heavy raids on 19 March 1941. Harry knows that a doctor recommended Walter for the prestigious award because his father rescued 24 people from a bombed hospital in Poplar. This may well have been Poplar Hospital in East India Dock Road, founded in 1855, which had its main building destroyed in 1941 during a raid that left many dead and injured resulting in its temporary closure. 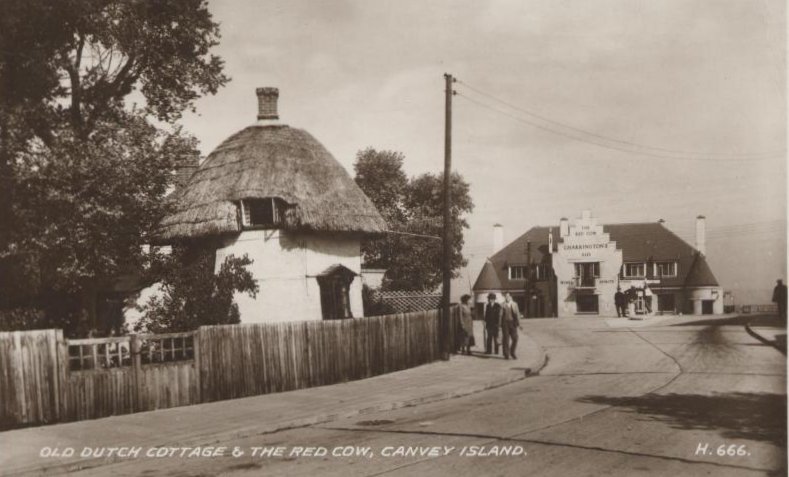 The Red Cow before the name changed to the King Canute

Harry says that the landlord of the Red Cow (now King Canute) took the family to London in his car for Walter to receive his medal. Whilst he was at Buckingham Palace, Harry also remembers seeing the two young princesses, Elizabeth and Margaret, in the hall.

Walter was 50 when his bravery was recognised but he did not survive the war.  He died from meningitis of the brain caused, Harry believes, by damage from falling debris whilst undertaking his life saving rescue work. Harry was in Egypt at the time, serving in the army. 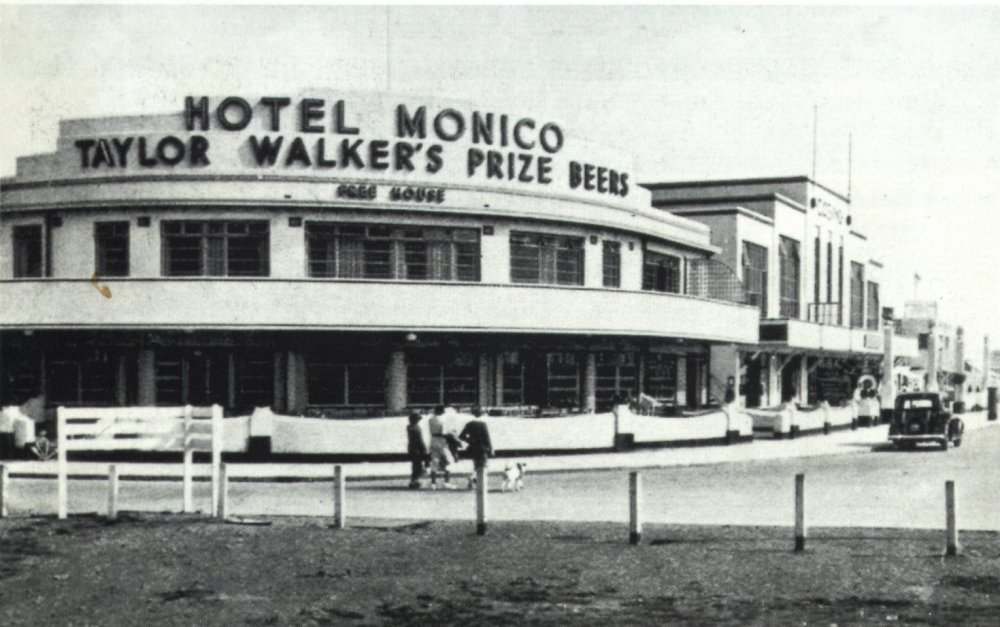 When Harry first came to the Island he delivered bread from the Golden Crust Bakery to soldiers in the barracks before working for Mr Beaumont who built the Monico. Harry’s job was painting gasometers when Mr Beaumont turned to him and said ‘You live on CanveyIsland, you can go an hour early if you will put up the blackout at the Monico’. Harry did it although it probably took him a good hour to get the blackout established across the whole hotel. Beaumont later asked him to get a team of half a dozen young men to unload iron ore and coal at the docks. Harry was joined by members of the Hodder family and other friends. They used to drive up to the docks in a van and would work non stop for 30 or 20 hours depending on the load. They used to get paid their wages at the Monico and Harry recollects that some of it went straight back over the bar.

Enemy bombing action was also aimed at the oil tanks near Coryton and problems arose from shrapnel puncturing tanks even when explosions were off target. The answer was to brick them up to prevent metal being holed.  Harry describes it as a ‘job and a half’ to create high curved walls around the tanks. They used to get across to the mainland on a boat from the Lobster Smack to Coryton, a journey of half a mile but one that was dictated by the tides. He recalls standing on top of a tank looking across to the Island when a bomb fell, landing in Long Road. For a while afterwards buses would stop one side of the bomb hole and passengers would walk across to buses waiting on the other side.

Harry married Beryl Brown in 1945, daughter of Wally Brown who had a shop/café in the Village and granddaughter of one of the Island’s farming families on her father’s side. On her mother’s side, she was granddaughter of the Woods family who had a bakery in the Village.  Harry and Beryl moved into a very basic farm cottage with no utilities but when their first child arrived they were awarded a new council house in North Avenue. They lived there until Harry had a serious operation on his back, making stairs a problem but they were given the opportunity of moving into a bungalow next to St Nicholas church in Long Road where they have stayed for over 30 years.  He thinks he was the first to take advantage of the chance to buy his council home in the Thatcher years.  It cost £2,800.

In the army Harry had driven heavy vehicles and so when he was demobbed he initially got a job driving for the council earning £3 a week. “I then started working for Regent down Haven Road driving tankers. There were six of us and I was earning £5 a week. We were like millionaires.”

His son was born the night the Island was flooded. He recalls that he saw the water coming down the road and when it hit the lamp post the sparks flew.  Once he had got his family off the Island he then had to come back onto the Island and go to work driving the lorries off to the safety of Benfleet.

Harry worked on the terminal site for 40 years although the operation put an end to his days driving tankers and his last few years were spent overseeing the discharging of oil from tanker ships that arrived. When a ship was discharging its cargo, Harry had to stay with the vessel until the task was completed. It was one night on the deck of a tanker he looked down the river to where the ships discharging methane were moored. “I could see by its lights that it seemed to be pointing a funny way. I called up those on the berth by phone to alert them.  A line had broke away and the ship was coming round. It could have hit the jetty. The Island was very lucky that night.”

Harry was also on hand the night the IRA planted a bomb and tried to blow up the terminal. Harry was cycling to work when the explosion went off. “It was a terrific bang. I was the first one on the scene. The large manhole where they had planted the explosives had been blown across the road but there was no real damage.”

He was a teenager when he arrived but Harry has a deep fondness for the Island and only one regret of life on Canvey. “I was cycling home from work one day when a man called Lowe who had a small office in the Village called out that he wanted to speak to Beryl. We arranged for him to come around the following evening. There was a large bungalow in the area with perhaps an acre of ground. Lowe was selling it on behalf of beneficiaries who were living overseas after the death of the owner. He was asking £1,200 but he wanted Beryl to have it and would drop the figure to £1,000. That space now has houses, a doctor’s and an optician’s on it but at that time I couldn’t scrape together £1,000. That is the biggest tragedy in my life. Think what we could have made.”