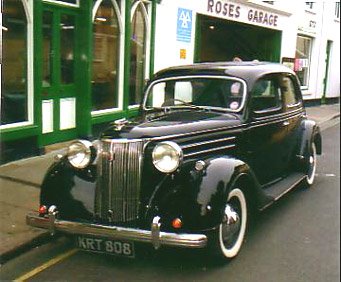 Essex Way also brings back memories as many a time I used to park my black Ford V8 Pilot at night at the top lay-by near the water tower (just to admire the twinkling lights across Canvey and meditate, you will understand that of course!!) with my girl friend until our dreams were disturbed by a knock on the steamed up window and a melodious policeman’s voice saying “Hello Hello Hello? What have we here then”.

Which meant winding down the window one inch and from the back seat explain to the very nice gentleman trying to shine his torch through the misted up window that you were just passing the time and listening to Radio Luxembourg, needless to say a grin used to spread across his face and he would depart, this was before the era of random breath tests because I am sure many a time if I would have had to blow into the bag I would have been over the limit.

Whilst on the subject of trains I think belated thanks is due to the old L.M.S. Railway on the design of the carriages and the very advantageous positioning of the railway stations, this I will explain. The carriages were divided into separate compartments of 12 with a door handle that could be held shut from the inside by putting your shoe against the handle thus denying access to everyone, and a light bulb that could easily be removed with a twist. With regards the stations it was a couple of minutes travel between Southend and Westcliffe and the same between the stations up to Leigh but between Leigh and Benfleet was a superb 8 to 10 minutes or so it seemed and by restricting passengers to the compartment by pushing your foot hard onto the inner handle and removing the bulb as the train pulled out of Leigh you had all this time to do your own thing, hopefully with the female of the species (i.e. read the Evening Standard, play dominoes, snakes and ladders, discuss the state of the economy or PARTAKE IN BIOLOGY LESSONS) and by raising your head you knew that when you saw the lights of Canvey Bridge and the Bus Terminal and Cafe you had one more minute to straighten your tie???? And get ready to disembark.

Of course now with the modern trains all one compartment, brilliant lighting and very fast, this type of pleasure is denied to the new younger generation so progress does have its drawbacks.