A mention must be made of the local cafes where the local youths met to pass the time, one of the most popular was Cockle Jacks being situated in the centre of the Island opposite the Haystack where most of us met to decide our destination that night. We were always welcome there even if we had no money to spend Cockle Jack’s wife Ann and her helper Kit Foster put up with us, noisy but happy just to listen to the Jukebox and chatter amongst ourselves. 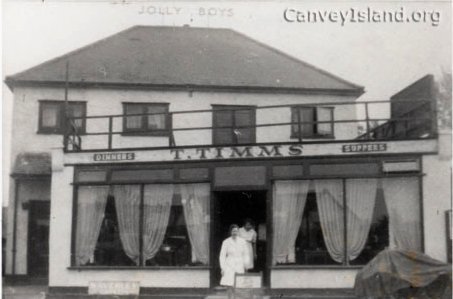 Then there was the Commodore situated on the corner of Sea view Road and the High Street (opposite the Admiral Jellico) Owned by an Italian with, if I can recall correctly, had two good looking daughters. The front entrance in the High Street was the café and the side entrance was the fish and chip shop. I do not know a lot about this café as we rarely used it preferring the cafes nearer to the centre of the Island.

Wally Brown’s café at the corner of Long Road and Haven Road was the workers café and you would not find a nicer couple than Wally and his wife Sweeney’s café was another handy café situated next to Benfleet Station and backing onto the creek, a wooden building stuck on piers and an ideal place to wait for the train and having the mandatory jukebox ,the owner, a Mr. Leech, (no relation to the farmer) had a daughter who we nicknamed “Spider” because she was all arms and legs and a son called Vic, they had another café in Leather Lane London and a couple of times we went up there and helped Vic out in the café( not very successfully I might add) when his parents were away.

Then there was the Jolly Boys café at the junction of Beach Road and the High Street with Tiny Tim serving behind the counter ( I think he stood on a box to serve, only joking) and dead opposite was Green glades café which, although not having the mandatory jukebox had one very good asset namely not many patrons and an alcove in the far corner at the front of the café where the owner a Mr. Lilliard used to let us play cards “No money boys” he used to keep telling us And we would tell him we were only playing for matches but as he was rather slow moving by the time he shuffled around the corner to coerce us into buying more tea and toast the money had been replaced and little piles of matches were innocently in front of us. 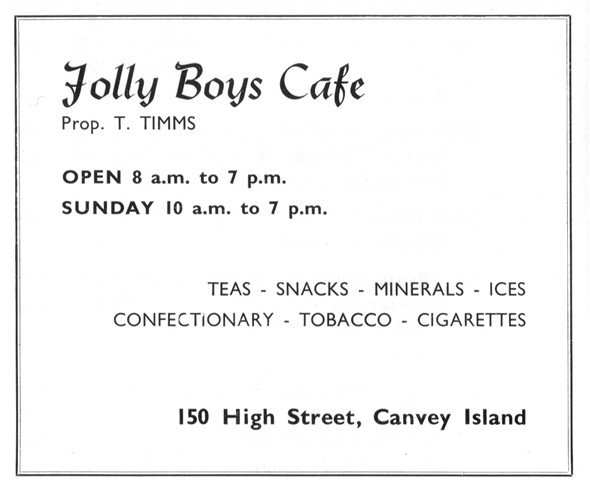 But the best café on the Island that us boys used to use for gambling was a newer café situated in an arcade of shops that Mr. Taylor who owned the petrol station next door had built nearly opposite New Road in the Village. This café was called the Unic , now this was in the mid fifties when we had all come out of the army ,old enough to drink and drive ,now looking back in hindsight it was a very stupid thing to do but in those days there was no such thing as ?Blow in the Bag sir? or random breath tests and, being young and silly we used to go out drinking, weekends we would drive up to London and do a pub crawl round all the well known ones including The Mile End Tavern and a little one tucked in behind Aldgate bus station and sometimes over the south side of London to the World Turned Upside Down, and Joe Lucy’s pub the Thomas a Beckett , both on the Old Kent Road and The Hole in the Wall, during the summer months we stayed local either Southend or any of the mainland pubs where the coaches used to stop on the way back to London loaded up with tipsy young ladies wanting to enjoy themselves (but that’s another story).

When we came back onto the Island after a nights drinking binge we would drive to the Unic cafe, drive fast up onto the pavement and skid to a halt about six inches from the plate glass window, (just to scare the birds sitting by the window, as you will have guessed we were show offs and lairs) swagger into the cafe’ and throw a couple of bob to the girls standing around the juke box for them to play some music ( this two bob played 5 records I think) and then go into the back room where we would have a game of cards (the owner did not mind this providing we would keep buying food and teas and he also liked a game of cards) we played pontoon three or nine card brag at sixpence a hand and he would keep the cafe’ open until we all went, sometimes this was as late as 2 in the morning.
Oh the joys of youth