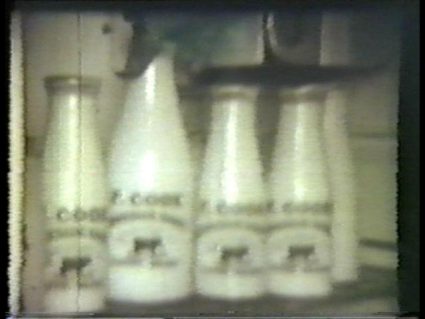 One of my class-mates Raymond Mint told me one day that he had to milk cows at the Cook Farm before coming to school.!! He asked me if I would like to get up real early one schoolday morning and  meet him at the farm milking shed, and see what was involved.  I gave it some thought and agreed to be there the next morning.

As I had never milked a cow before he proceeded to show me the technique but my efforts were not working, so he pulled a time-worn trick on me.!!!  Asking me to get closer he turned the teat upwards……I took a direct hit in the face.!!

After much laughter, mixed with some protestation by me he showed me another chore that needed doing after each milking.

It involved sweeping the trough at the rear of the cows (containing you know what) along to a drainage system.

As soon as the milking and chores were finished we hurried off to school. I can tell you that we often went to class with a distinct “farmhouse” aroma coming from our shoes.