On a recent visit to Canvey, Doris Scullard born 1922, my father’s cousin, (Aubrey Stevens whose father, Oliver, started the Stevens Bakery on Canvey) presented me with her autobiography written in 1984.  Offered here are excerpts from some of the chapters covering her memories of her visits to Canvey from a very early age.

Notes:
Doris writes in the third party
Her parents she calls by their Christian names Harry and Gwennie.
For ‘called Home’ or ‘gone Home’ please read ‘passed away’

‘Canvey’ could not be dismissed so lightly and demands several chapters.  In childhood at least nine weeks a year must have been spent there, weeks when routine was discarded, which may account for the impact (though, of course, the chapters on Vernon, Doversdale, school and so forth were all part of the life when one lived at home)

In childhood days the family included Grandma, a rather frightening person to a toddler, for Grandma’s speech had been impaired by a stroke, she walked with a stick and was not well enough to stand a toddler’s fidgeting. 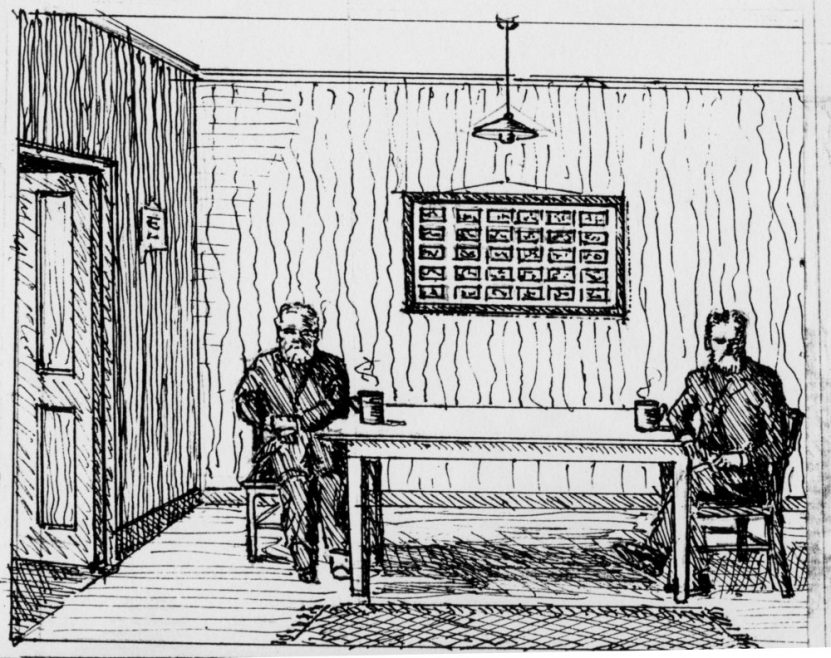 Grandpa and Uncle Charlie having their cocoa

Also, in those far off days there were Grandpa and (Great) Uncle Charlie.  These were always connected in the child’s mind.  Uncle Charlie was Grandma’s brother, a bachelor who had joined her when the single sister was called Home.  Grandpa and Uncle spent much of the day in the garden, coming in for their mid morning cups of cocoa, and again in the afternoon.  They used to sit, one end and the other end of the kitchen table as they had their warming drink.  Presumably they joined the family at other times and did other things, but the toddler could not remember anything else about them when she grew up, though she had been about 7 or 8 when they were called Home, within a few months of one another.

Gwennie’s two unmarried sisters completed the part of the family which lived at The Settlement.  ‘Auntie Dorothy’ was the most important part of Canvey to the child, until she was called Home at the comparatively early age of 47, when she was 11.  Canvey was never quite the same again for the child.  ‘Auntie Dorothy’ had brought her into the world, she was left in ‘Auntie Dorothy’s’ care when at Canvey without her parents, and was the dearest aunt anyone could possibly want.
The grown ups had realised that Dorothy was frail, but the child had not known this and it was her first conscious realisation of death, though Grandpa and Uncle Charlie had both gone Home about three years before and Grandma only a couple of years earlier, and Grandad, in Sutton, had also passed away during her lifetime.  None of these had been so vital a part of her life, and in fact she can hardly remember Grandad, though she had tea on Sundays with him each week when she was at home.

Blossom was not left alone at home after the Home call of Dorothy, for they had undertaken the care of an elderly lady, Mrs Edwards, who died some years later, in her late 90s.  For a time, too, Blossom let part of The Settlement, as a flat, and the daughter used to go up and inflict herself on the tenants, probably trying their patience, especially as one of them was a school mistress who had probably had enough of children when she came home from school. 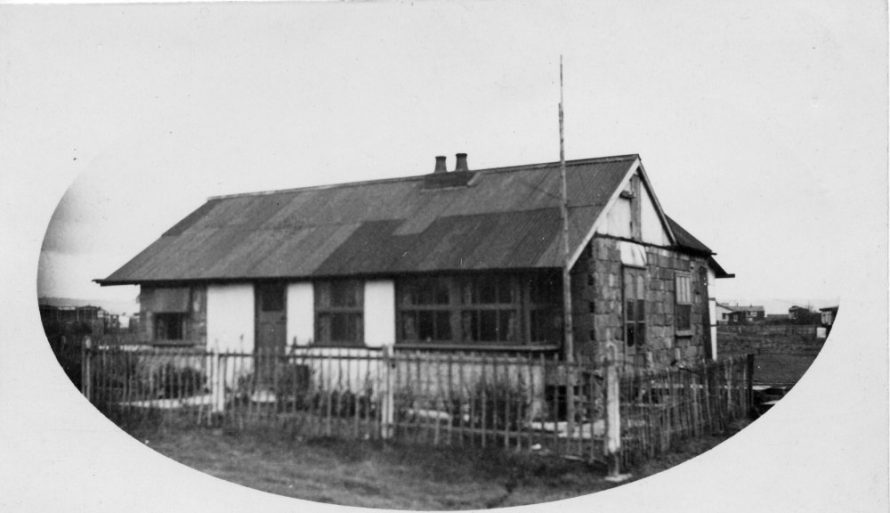 Across the large garden, which in the early days had given Grandpa and Uncle Charlie adequate occupation, and over an unmade road was Reliance Cottage, built by Gwennie’s younger brother, Ollie, which was the home of his family.  His wife Mattie was always rather frail, and from the time of the birth of their third child, somewhat of an invalid.  Ray was a year older than Gwennie’s daughter, so she does not remember her as anything but a semi invalid.  She tried to cope with the housework, but had to rest frequently in the middle.  Her chief pleasure was to play the organ at the Baptist Church they attended.  Ollie worked very hard at the family business, in the summer often working 18 to 20 hours a day, but he had tremendous stamina and could stand the hot bake house atmosphere even for such long hours, snatching meals when he could. 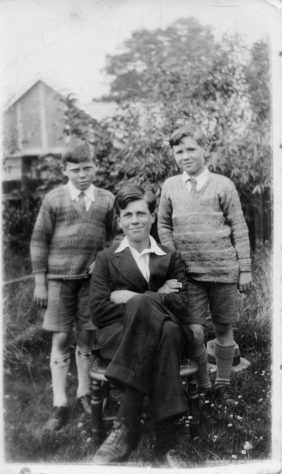 The family consisted of Aubrey, some seven years older than his cousin, and so right out of her orbit, but Ralph, three years older and Ray, one year older, were almost like brothers to her while she was down at Canvey.

The bakehouse was just down the road. It not only kept Ollie busy, but the boys used to help on the rounds as soon as they were old enough, and their cousin joined when she was there.  Mattie, in spite of her weakness, managed to keep the books, even right up to the end, long after she had been forced by increasing weakness to give up the housework and even her chief joy of playing the organ, and latterly was hardly ever able to go to Chapel.

About ten minutes walk away over the fields lived Gwennie’s twin, Maggie, with her husband, Harold. Together with her parents and Aunty Dorothy, these were the most important people in the child’s life, not only in childhood days, but on to adult life.  All five are now in their Glory, with their Lord.

Changes inevitably come to any family over the years.  Apart from the passing of three of her grandparents and her great uncle, which did not register much in the child’s mind, and that of her dear aunt, which had a profound affect upon her, there were few major changes until during the war years and after. 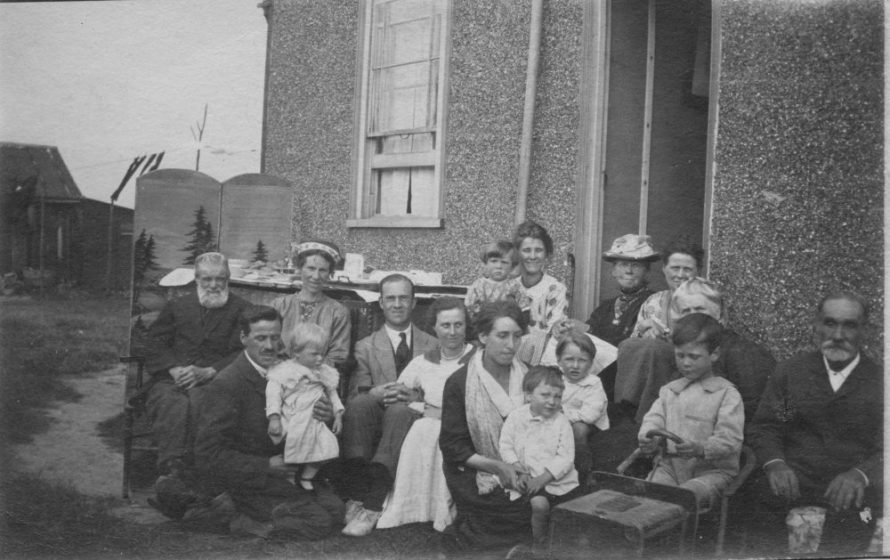 Gwennie’s generation have all gone now, and some of the family live away from the Island, but return for visits, but wherever they live, be it Surbiton, Edinburgh or elsewhere, all Ollie’s descendants are thought of as the Canvey branch of the family, just as Christie’s descendants are thought of as the Enfield family, though some of these now live in New Zealand. 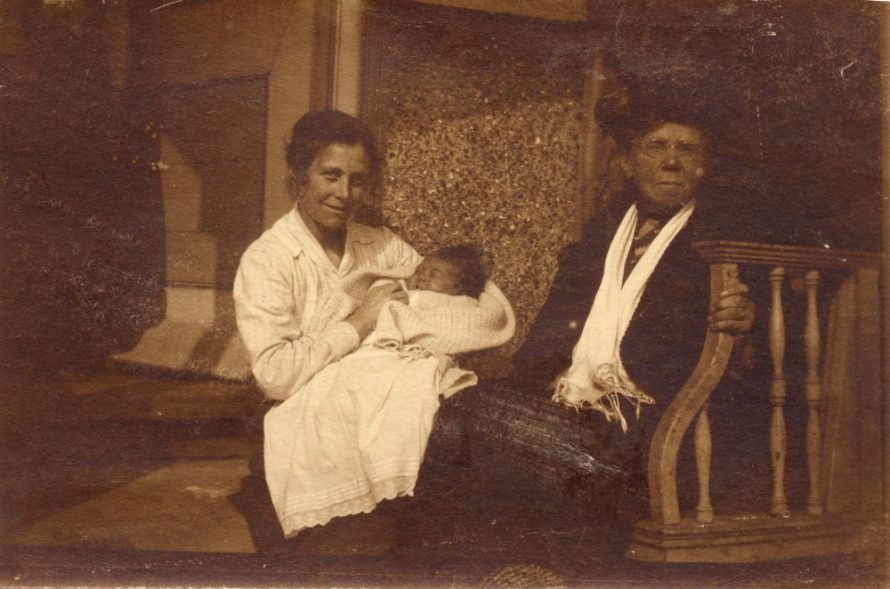 There is pictorial evidence that Gwennie took her daughter to Canvey as a baby on several occasions, probably starting with the Easter when she was only a month old. Obviously, she cannot remember it!

Her earliest memories are of being scared of a Grandma who could not speak properly, due to a stroke, and who walked with a stick.  This old lady used to sit around reading a lot, and was always finding special bits in the books she read.  In earlier days she would have made a copy of the extract, but now she turned the page down, so that she could find it again, marking the extract.  She had encouraged her daughters to have books in which to record special things that they found when reading, and had long practised this herself.

She can also remember going across in the ferry boat, or if the tide was out, getting a pick-a-back from the ferry boat man, while Gwennie walked with the other grown ups on the stepping stones.  Over the other side was a horse drawn contraption which came to meet the trains and convey the passengers to the other side of the Island.

On at least one occasion she was down at Canvey in term time, perhaps because Harry had to do his Barking job then, one he tried to fit in when school holidays were on.  As it was school time, the daughter had to go to school, and was sent to a ‘dame’ school near her aunts’ home for a few weeks.  Her memory of this time is the more vivid because she dropped a 6d piece in the unmade road just outside the school and spent most of the rest of her time at Canvey, when free, looking for it.  She resumed the search when she next came down, and for several holidays thereafter!
How early it was that she was left down there in the care of her Auntie Dorothy she cannot remember, but almost certainly before the period under review was finished.  Her parents went off for cycling holidays during the Easter Holidays, and she was also there without them for much of the summer, her parents joining her for a fortnight at the end.  When her parents were there she stayed at Old Jordans, except at Christmas.

Her cousins Ralph and Ray were her constant companions down there and she used to run errands for her aunts.  These included calling her Grandpa and great Uncle Charlie in from their gardening to have their morning or afternoon cup of cocoa.  She also used to go out to chat to them as they worked.  These are definitely very early memories, as they were both called Home when she was about 7 or 8 (Her grandma called Home even earlier) 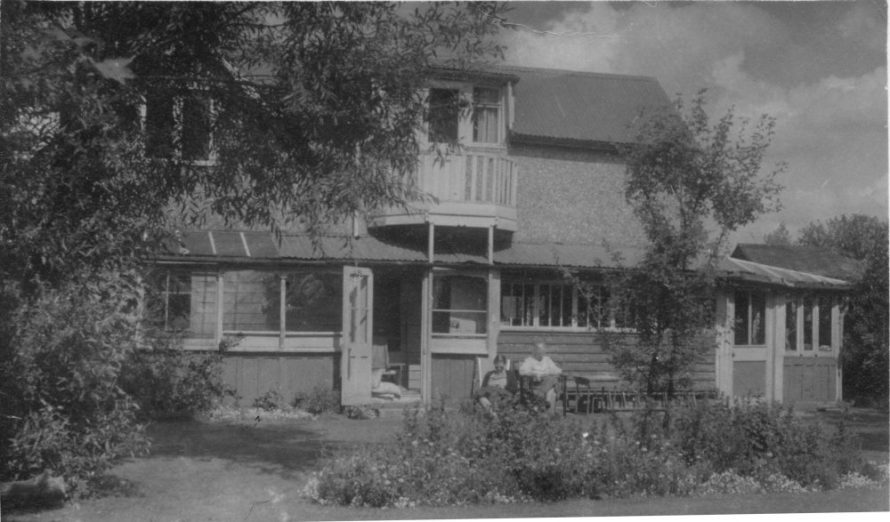 Some of the Old Jordans memories must also have been very early, for she can remember being taken home across the fields after dark on Harry’s shoulders, while Harold carried the lantern.  This she associates with, rightly or wrongly, with Sunday evenings, returning from the singing service that was held at Whittier Hall for many years.

What memories she has of that field path between Old Jordans and The Settlement!  It was just a little winding path that had been worn down by constant walking, between the high grass.  It was only wide enough for one person to walk on at a time, so we went single file.  Then there were the bridges over the various dykes that were passed which drained the land, and big puddles if the weather had been at all wet.  Nearer the main road and The Settlement were the goats belonging to Mrs Hawes of the Drug Stores.  It always seemed a pity that she remarried, for Mrs Tutt did not go nearly so well with the name of the shop! 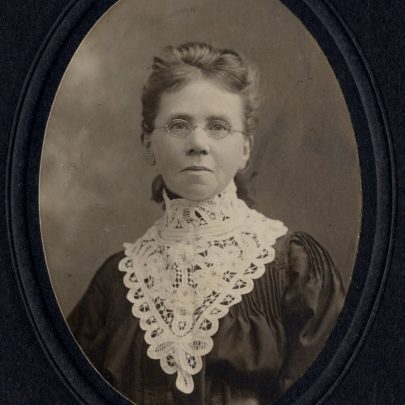 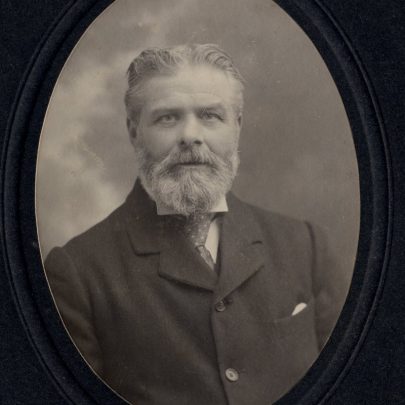 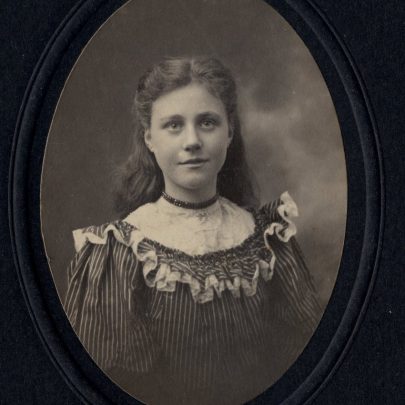 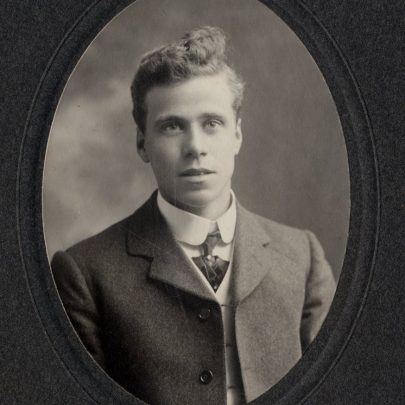 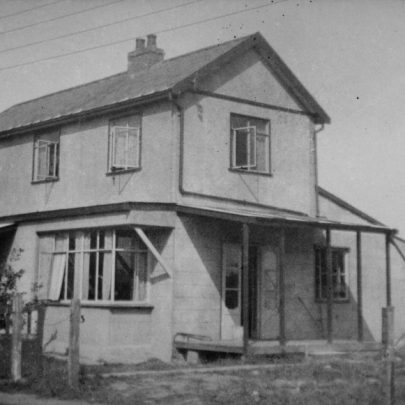 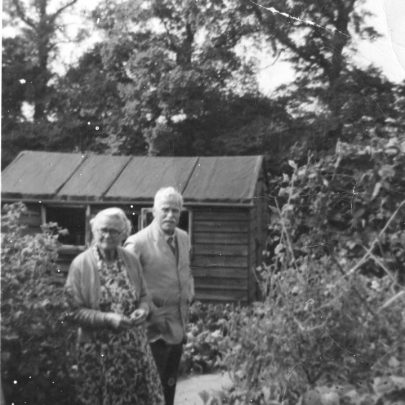 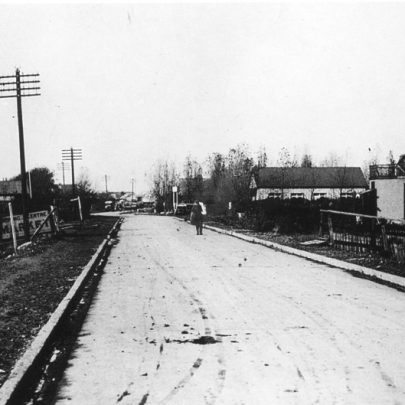 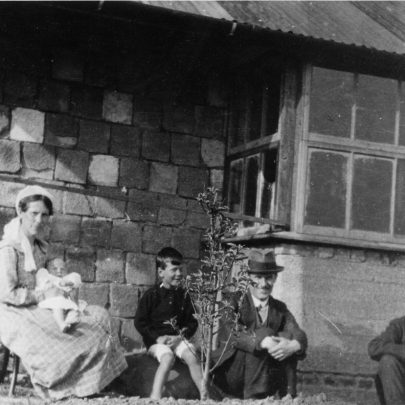 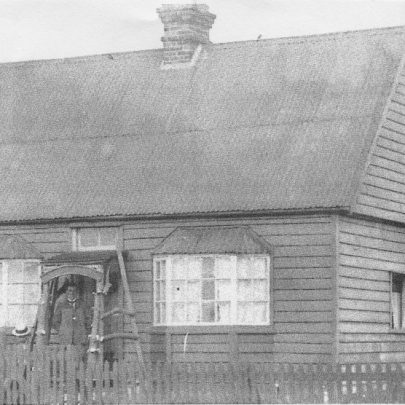 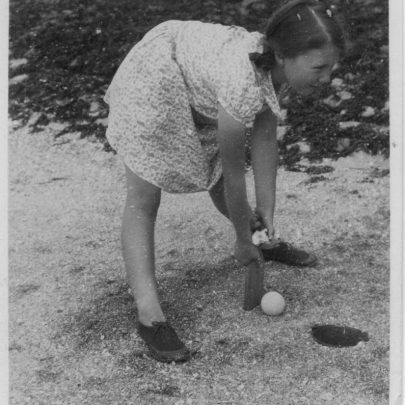 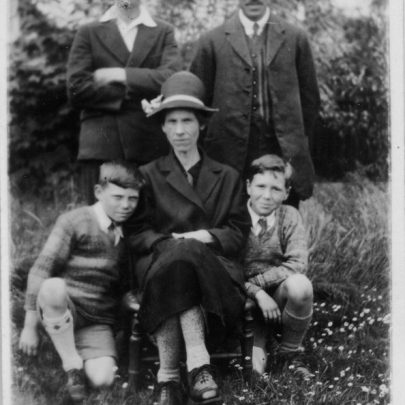 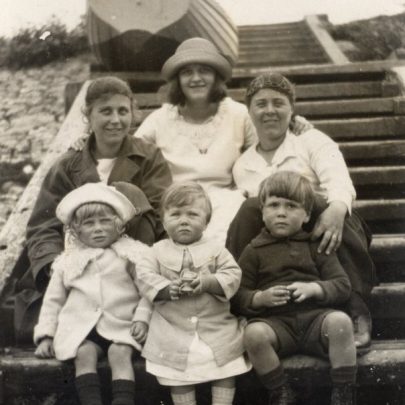 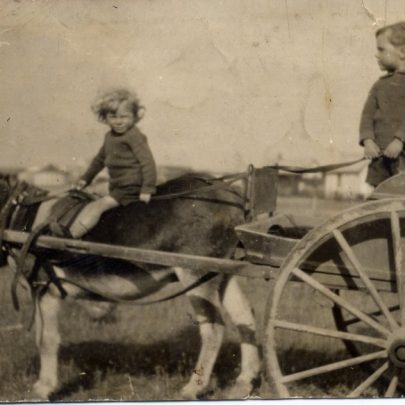 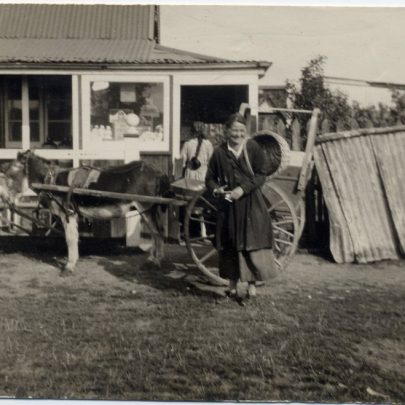 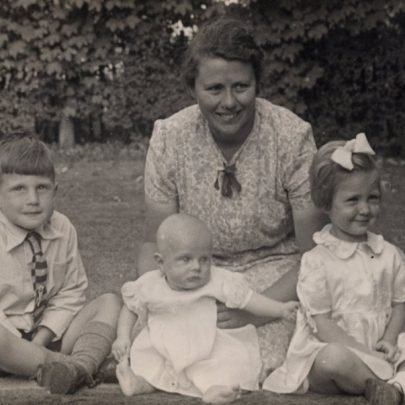