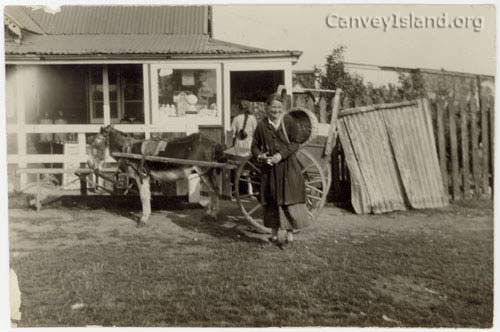 Firstly, when I was at Leigh Beck School and about 8 years old (c1950 in Mr Groves’ class) I had a best mate called Tony Wells, he lived on the north side of Springfield Road on the corner with Zinder Pass.  Mrs Laws lived in a bungalow next door, on the corner of Northfalls.  Whenever I went round Tony’s she was always sitting on her veranda looking out onto Springfield.  She seemed rather remote and formidable, as we scuttled by, without even making eye contact.  She was a lady of ample proportions and very pink complexion and gingery hair and nearly always seemed to wear a large straw sunhat.  My Dad, (Aubrey Stevens) used to refer to her as: ‘Mrs Laws ‘The Poetess‘.  I guess he must have had some conversations with her when he was on his bread round and therefore knew something of her educated background.

The second place was when we saw her bathing at the end of Southfalls (as described by Stan Pierce). I don’t know if this was always in the summer because sometimes it was on some very cold, grey days.  As mentioned before she was not a small lady and large amounts of the ample proportions seemed to escape the confines of the heavy black woollen bathing costume.  In fact, to my rather childish mind, she looked rather like a large pink jellyfish floating down there, in the corner by the groyne. 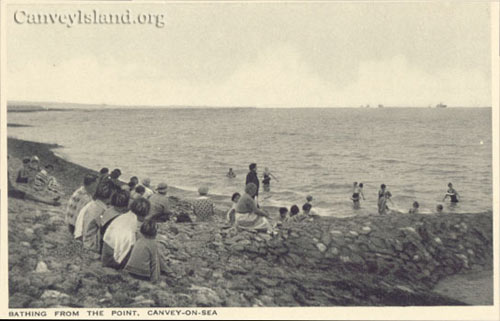 The Beach at Canvey Island

We did know she was disabled and regarded the bathing as a form of therapy.  However, it was not until I read Stan Pierce’s graphic description of her arduous progress between these two locations that I realised what a courageous and stoic person she must have been.  Also, if we had made some contact we also might have benefited from her knowledge, as he did. I know I feel some pangs of guilt for my childish imaginings of her as a large jellyfish!

PS. My sister Jenny (Stacey) does remember when she was with her friend, Anne Woollard, they used to see Mrs Laws crawling on her hands and knees towards the sea wall. This must have been later in the 50’s.