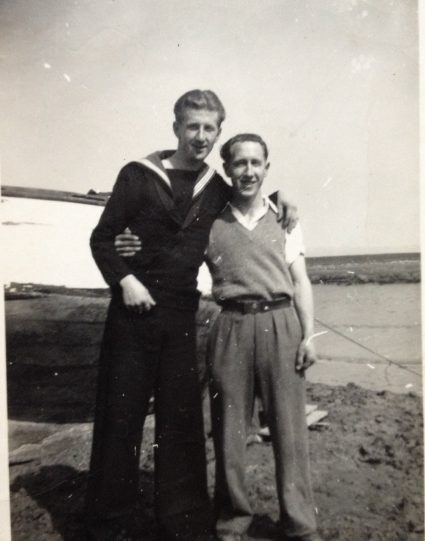 Jack and I used to go shooting most weekends in Winter; he had a single barrel 12 bore, I had a 16 bore repeater 22 rifle. As I have said before the Ducks were very well educated and would usually fly off long before they were in range so it was hard to find a tin can on the marshes that was not Pepperd with holes.

One evening we were having a game of snooker when in came Bobby Knight and his brother Fred. Both looked like they had been in a car accident, Bob had his arm in a sling his other hand was bandaged and he also had a black eye. Fred had a black eye that finished on his chin, plus various bits of plaster over his face. Well, after all the laughter had subsided and smart remarks as to what others thought had caused these injuries, they told us the true story.

Their father worked in the Woolwich Arsenal and knowing that 12 bore cartridges were in short supply they decided to borrow some of the kind that were used to launch mortar bombs. This was a good idea except for the fact that they did not contain any shot and they were full of cordite which has a bit more punch than the  gunpowder that is used in normal 12 bore cartridges.

Disregarding this minor fact they emptied about half the cordite out, filled it with number 6 shot then went over the marshes to try them out. The first two shots were very good but the third one, well perhaps Bob didn’t take enough cordite out because the gun exploded at the wrong end. The laughter erupted  again as this part of the story was told, sympathy was always scarce in my circle of friends. 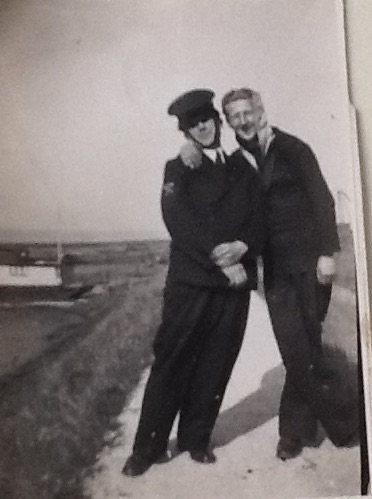 On the back it reads Me and McDonald. One over the eight.

Jack asked Bob if there were any cartridges left, Bob said there were and if Jack wanted them he would drop them off on Saturday lunchtime. Early Saturday morning we had arranged to go shooting ,as we walked back we were discussing guns and prices. Jack looked at his old single barrel and said.

I agreed because it was in good condition

“Come down the point this afternoon,we can have some target practice if Bob has dropped those cartridges round. I’ll take out some more cordite and we can see how they go.” Said Jack.

After lunch I walked down the point to see how things were going. There were five or six of the shooting gang there and Jack came up to me his face beaming.

“We only have one left, you watch this .”

He placed a large tin 50 yards out on the mud a chap called McDonald was to do the honours and made himself comfortable in a hollow in the sea wall.

Being of the cautious type, I stood well away, I could see the gun barrel poking out of the long grass. Suddenly there was a blue flash it did not come from the end of the gun barrel but more from the hollow. I looked at the tin, that had not moved, then I noticed something spinning around in the sky about 20 feet up in the air and I realised it was the gun barrel. Everyone rushed to the hollow where McDonald was sitting, his eyes were closed and his body was hunched over. He was still clutching the stock, the trigger guard was dangling from his finger and between his feet I could see small fragments of gun buried into the hard mud.

Other than, McDonalds once good complexion was now pepperd with cordite burns, his knuckles cut and his clothes torn, he looked okay.

After a few minutes his eyes opened and without focussing he asked what happened. When it was realised that he would live everyone started to laugh and to look around for the rest of Jack’s  gun. As we walked home Jack was carrying the barrel in one hand and the stock in the other.

I said to him.

“There is one thing that is for certain.”

Very many thanks to Jack Fennwick for allowing me to share this with you.