The Night I Was Born 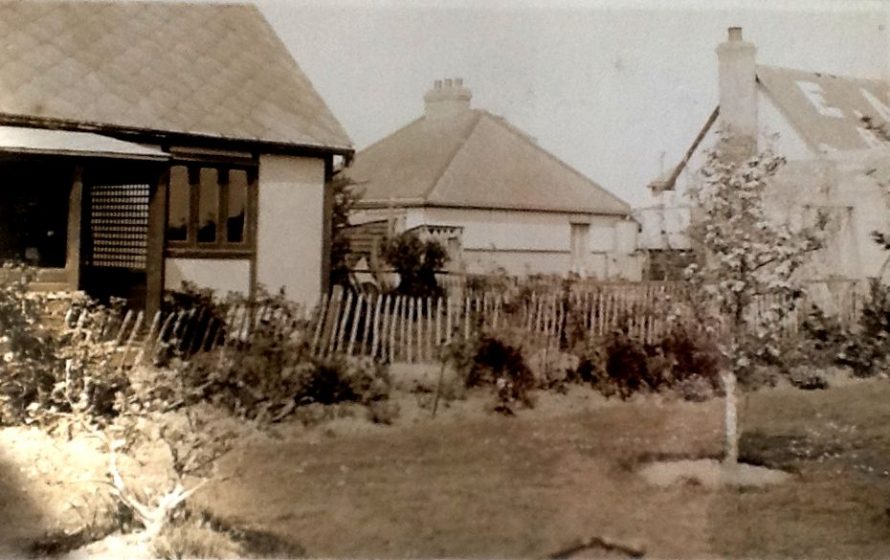 Two bungalows built by Edward Manly plus far right his workshop where John was born with the family name on the roof.

I was born on December the 10. 1928 to a Mrs Doris Elizabeth Manly at around 20.00 hrs on a very cold winters night. The snow lay 6 inches deep and an icy wind howled round the little wooden bungalow that my Dad had hastily converted from a carpenters workshop, it measured 14 feet by 35 feet and consisted kitchen one double bedroom and living room which had the only open fireplace. Paraffin oil lamps were used for lighting. Gas pipes were laid down the grass roads in 1936 and electricity in 1947. Main water arrived at the same time as concrete road about 1957-8 so life was rather primitive in my young days.

On this particular night an old man called Whithead had stopped off at the Haystack pub to quench his thirst, he was a small but wiry caricature with a long white beard and a foul temper if roused. He lived in an old gypsy caravan on waste land not far from our house and earned a living buying and selling anything and everything.

By the time old Whitehead had satisfied his thirst he could hardly stand, he would climb up on to his cart, which on this night was loaded with potatoes, and go to sleep, relying on the old horse to find his way home, two and a half miles in the dark. However, owing to a six inch blanket of snow the horse miss judged the bridge crossing over a wide deep ditch so the cart potatoes and Whitehead went into the icy water!

The midwife who was desperately trying to find the Manly’s residence and had become hopelessly lost in this white wilderness, had heard the commotion ( mostly the old mans cussing) naturally thought that this person might be able to help. She struggled through the snow in the direction from which the noise was coming. On reaching the bridge she shone her touch into the ditch and illuminated this most pitiful scene. You can imagine the string of verbal abuse she received from this bad tempered old man who was standing up to his waist in icy water with a ton of potatoes floating around him! When she did eventually arrive at her destination she could hardly relate her story for laughing! This probably helped Mother through the very painful ordeal of giving birth to me. She had a very good sense of humour and I’m sure that she would have had a good laugh on hearing the midwife’s account of her first meeting with our old neighbour!

This exceptionally cold winter of 1928 was to continue well into the new year, Mother would often tell me how she had to break the ice on the rain water tank with a sledge hammer before she could get water for drinking, and washing.