You are here: HomenextHistorynextAll Your MemoriesnextStanley Perry's Memories and Photosnext3 - Stan Perry's Recollections 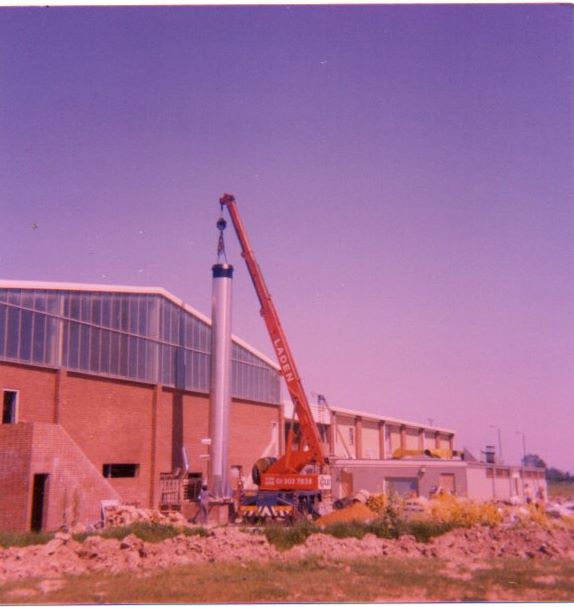 The rear of Waterside Farm Sports Centre under construction in 1975

Most of the roads on Canvey were unmade and with a dyke and only a plank with which to cross, usually an old railway sleeper, making it impossible for there to be a house to house rubbish collection. Canvey Island Urban District Council (we weren’t coupled with Benfleet until the early 70s) overcame this by putting a large galvanised bin on the corner of each road and you had to put your rubbish in there. These were emptied by Arthur Read with his Shire horse and two-wheeled farm cart. After he had emptied them he used to sprinkle them with pink powdered disinfectant. Arthur was a country bumkin type but he carried out his work dutifully. No. 1 Mayland Avenue being on the corner with Southwick Road had one of these bins outside it. Next to the bin was the road sign. This was a pole with a cross board about 2ft 6 inches long and 4 inches wide painted white with black lettering. It had Mayland on one side of the pole and Avenue on the other. When I was 6 years old we had only been on our summer holiday for about half an hour. My brother went out to play. He had climbed on the bin and was swinging on the Mayland part. Me wanting to copy my big brother climbed on the bin and jumped to swing on the Avenue part. As this was further away I missed and fell breaking my right arm. We spent the rest of the holiday by going back and forth to Southend hospital. 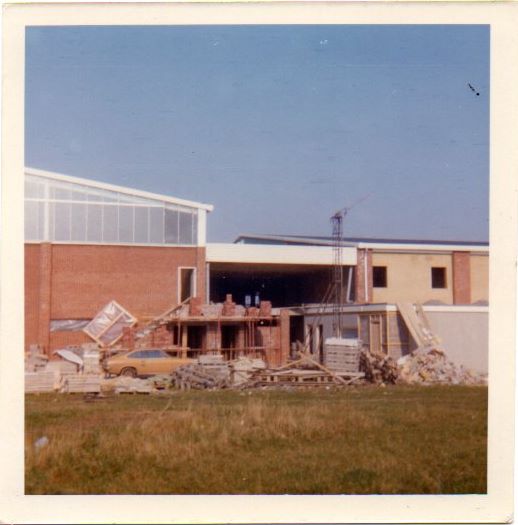 The rear of Waterside Farm Sports Centre under construction in 1975

The roads on Canvey only became anywhere near accessible after the flood. The council having received a grant had to spread it as thinly as they could. What they did was to make two strips of concrete about 9 inches wide down the centre of the road about 12 ft apart and fill in between with cinder clinker and then rolled to compact it. The clinker was a by-product of town gas and was mainly used to make breeze blocks for the building industry. When the country changed to natural gas obviously it was no longer available. So fly ash from coal-fired power stations is now used as a replacement.

As the Island started to become more developed the council passed a by-law whereby any builder building a property had to make it accessible by making up the road, putting in footpaths, curbs, drains and street lights as far as the nearest made-up road. A lot of builders to save cost only did this to the frontage of the property and then a strip of concrete down the centre of the road without any footpath. A case in point is Edith Road, which only had a strip like this for the length of the King Canute car park.

If so many dykes had not been piped and reliance placed on electrical pumps instead of sluices we wouldn’t have had all of the recent flooding. For in my mind an open dyke can hold more volume of water than a narrow pipe.

Where Stibbard’s the undertakers office next to the Heritage Centre is where the Village blacksmith’s forge used to be. The blacksmith’s name was Mr. Bateman. His daughter Francis still lives in the Village. She and her husband Gerry had a hardware shop in the old Tibbett Store in the Village. When they first started in the early 70s their main business was the sale of paraffin and the sale and repair of paraffin heaters. At that time paraffin heaters were the most popular form of heating on the Island. The other was Aladdin Pink. As their business grew they opened another shop in what is now an optician’s in Jones’s Parade at Denham Road. As paraffin began to lose its popularity Gerry took a course and became a locksmith.

After their success at the 1948 London Olympics the Prout brothers started their business making canvas collapsible canoes. These were known by their brand name of Titcraft. The Prouts first started in one of the last old farm barns that stood in what is now Gwendalen Avenue at Smallgains Corner. As catamarans became popular they experimented by lashing two canoes together. This seemed to work ok so as their business grew they moved to larger premises at the Point, just past Canvey Supply, and made a much sturdier hull from marine quality plywood which was stapled and glued using beetle glue to a framework and then put into a strong rubber bag. The air in the bag was then pumped out which allowed the atmospheric pressure to act as a clamp while the glue was set. In the 70s whilst I was working for Loe and Co. we built them a much larger factory next door to their existing one in which they built a massive luxurious ocean going catamaran. At the same time they had a contract to build a slightly smaller one but still quite large. It was more or less finished and floating in the creek at the end of their slipway. It was the Easter weekend and the owner was told not to take it out. To ensure this they took off the rudder and kept it locked up. However, the owner defied their instructions and being anxious to try out his new toy, thought he could manage to steer it with his outboard motor. Alas he managed to get to the other side of the river when he capsized just off All Hallows. What the outcome of the insurance claim was I don’t know.