You are here: HomenextHistorynextAll Your Memoriesnext1950s and beyondnextA close call the other side of the wall

A close call the other side of the wall

Swimming in the Thames

Reading Stan Pierce’s story about the night he nearly died started me thinking ‘I wonder how many of us kids growing up on Canvey have had a close call the other side of the wall like this’.

I remember when I was about 14 years old, me and a mate ‘Clarkie’ (Alan Clarke) were swimming off Seaview Jetty on a high tide.  Clarkie said ‘let’s swim out to the buoys’ (where they moored the catamarans).  Although not a particularly strong swimmer, I said ‘Ok’. 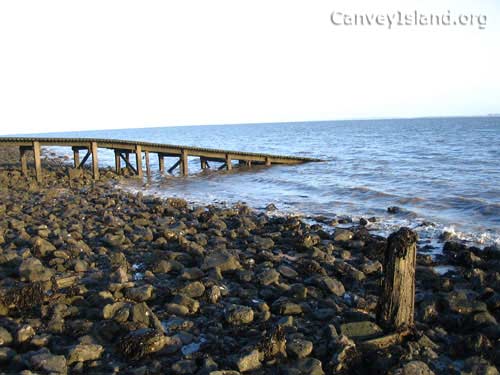 The Chapman Jetty at the end of Seaview Road

Clarkie reached the buoy first and I seemed to have gone off course, a bit downstream.  I turned to get to the buoy, it was only about 10-15 yards.  I was swimming as hard as I could but not making any headway.  I thought ‘blimey this is hard work’  so I paused a moment. It looked like Clarkie was roaring away on the back of a speedboat, but it wasn’t Clarkie speeding off, it was me – going backwards!  Obviously the tide had turned.  I looked up at the seawall and realised I was about half way between the Jetty and Southfalls beach.  By now Clarkie was waving his arm towards the shore and shouting, ‘Go across’.  It took me a few seconds to cotton on and I headed towards the seawall end of the jetty.  It seemed to take forever! Eventually, I washed up exhausted on the seawall close to Southfalls beach.

‘When you’re the other side of the wall, whatever the state of the tide you respect Old Father Thames and watch all his moves and moods’.