My Holidays on Canvey

It was interesting to read about Canvey Island history, I have recently started to remember and jot down my times as a young girl so that my children and grandchildren will have an idea of what my life has been like.  I wish that I had asked my mother to do the same so that I would have had something to pass on to my children of their Nanna’s times. 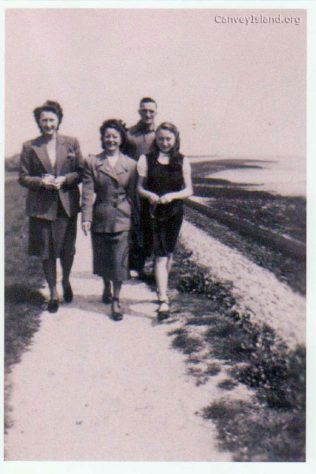 Photo of my Mum, Dad, Aunt Rene and myself

I was born in Chingford Hospital in 1937 and then lived in Walthamstow until I was 13 when we migrated to Australia in 1951, my memories of Canvey Island are very dear to me.  During the second World War my Dad was a Sergeant in the Army and stationed on Canvey, he used to train the new recruits before being sent overseas and also on the big guns that boomed away during air raids.  I was only a small child when my mother took me to visit Dad but I remember being shown around and Dad teaching me some of the Army songs that were sung.  Canvey had plenty of paddocks around the Army base where we went for walks during our visit.

After the war I well remember my first holiday on Canvey, we drove to Canvey by motor bike and sidecar and stopped in a paddock behind the sea wall where quite a few people were pitching tents, we did not have any camping gear except a few tarpaulins which dad used to cover his motor bike.  We decided that we would try this camping idea out and Mum and I went into the adjacent field to gather hay to put under a plastic on the floor to make a mattress, we found two sticks and had string to place a tarp over the top to form a tent, both ends were open to the elements.  We enjoyed ourselves so much overnight that Mum went by train back to Walthamstow to get a few stores and clothes to enable us to stay a few days. That was the first of our many camping holidays on Canvey.

Mum, Dad and I would walk along the sea wall to the main area where there was an inside funfair and I would also go to the outside Punch & Judy show on the other side of the road from the funfair, this was the highlight of my holiday.  Eventually we had friends who owned a single room bungalow with a shed on a piece of land which was quite near the sea wall, they even had a lookout made of wood which had steps leading up to the top deck and you could see over the sea wall.   We enjoyed walking along the sea wall at dusk and you could see shining blue lights in the water which Dad said was reflections from the fish swimming close to the edge.  My holidays on Canvey would not be the youth of today’s ideal past time but to me they are treasured memories, I still have a photo taken at 13 with Mum and Dad and my Aunt walking along the sea wall.

I visited Canvey six years ago, my first visit to UK since leaving at 13.  I only had 4 weeks and plenty of relatives to visit.  My Uncle drove me to visit cousins who lived there, I remembered Canvey as mainly open fields and sea wall and not many shops, now I saw plenty of houses, shops and many people.  I didn’t have the time to take a walk along the sea wall to see where we had camped or where I first learnt to swim I guess I will leave that in my memories.   Maureen Holland (nee Gilbert)