First thing you saw on the lefthand side was a Farm cart containing Milk Churns from Cooks Farm at the end of Concord.  They were picked up each day and sent for bottling.  On the righthand side was a bungalow called ‘Montacute’, The people that owned it lived in London and it was used weekends and holidays.

Next to that on the righthandside was a bungalow owned by Don and Ruby Lunn with their two children the bungalow was called ‘Doris’. Bit of land in between then a bungalow called ‘Rose Cottage’ and elderly couple lived there he was a cobbler and his family used to come down from London for holidays.  I think they were related to the Crickmays who lived in Central Avenue.

On the left again spare land and then the bungalow of the Hicks family. Can’t remember the name. Mr & Mrs Hicks, June, Jess, Fran, Stan, Ron and  Dave (not that they all lived there at this time).

On the righthand side a bungalow with a lady whom I know nothing about, she lived alone as far as I can remember.  Next door to her on the right was the Russell family, Dick and Mary with the children Sylvia, June, Bill and Jimmy.

On the lefthandside was Victory Lodge, my Dad and Mum (Bob and Gladys Jones)  me (Valerie) and brother Trev. We shared the garden at various times with chickens, rabbits, three pigs Patsy, Porkie and Maisie and three goats Connie, Sally and Lindy-Lou. Plus many times grazing Lunns’ horse Tom.

Spare land again on the righthandside then a bungalow with a family Mum Dad and 2 children can’t remember their names.  The bungalow faced Tabora Avenue and was called St. Ninians after they moved out an elderly couple moved in.

Next to that again facing Tabora was ‘St Malo’ home to Tom and Elizabeth Giddings with children, Lorna, Gill, Linda and two boys whose names I forget.  Mr. Giddings was a Teacher and Canvey County Junior School and and he died very young so the family moved away. 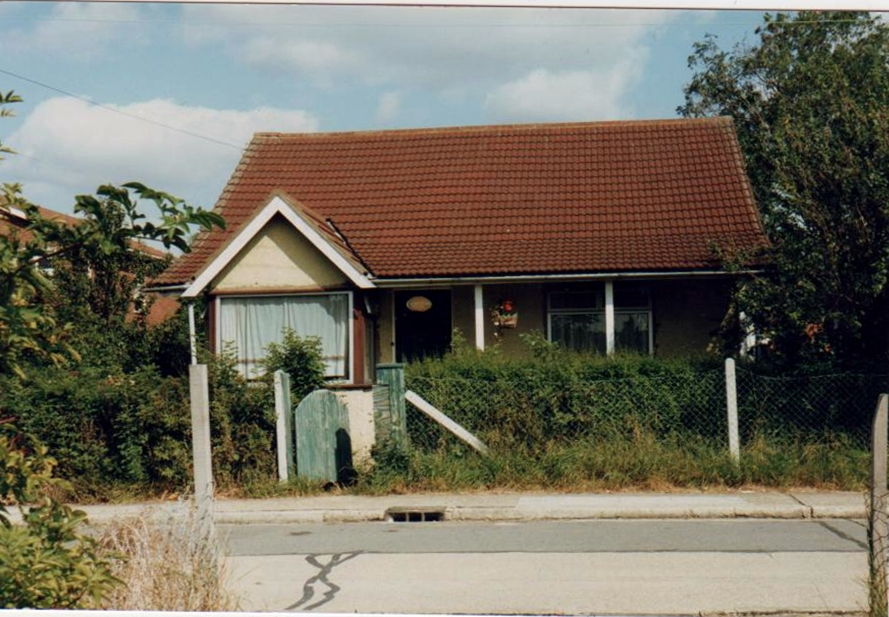 Another empty piece of land opposite them and next to it on the left was ‘Rosedene’ the bungalow with Mr & Mrs. Murtell and their son Reg, who was a porter at Benfleet Station.

More empty land on the left and then the bungalow of Mr. & Mrs. Reddish and their son Eric. Mr. Reddish was a designer at Fords but I can’t remember the name of the bungalow.

Opposite them on the right were the Daltons’ Mr & Mrs. Dalton and daughter Sue, the bungalow was called ‘Dreana’. There garden reached down to the Farm land owned by the Cooks.

Lastly on the lefthandside again after a spare piece of land was Cooks’ Farm House Mr & Mrs Cook, Connie, Madeline, Len and Daphne it was facing the cowsheds, the fields and across the field Denham Road. You could easily see across the fields to the Catholic Church as there was nothing else there.

Concord Road was unmade but the Council delivered Clinker once a year to fill in holes.  I still have Clinker in my knee from falling off my bike.  Wouldn’t change the childhood for the world, the freedom, the neighbours, the fresh air. Wonderful. Well apart from having to go to Winter Gardens Path to get fresh water, getting the tin bath in from the back of the shed and going outside to the Loo.  Still wouldn’t change it.