Memories of the Casino Ballroom

Jiving & Twisting the Night Away

During the late 1950’s & early 1960’s the Casino Ballroom came alive to the sounds of Rock and Roll. With Mods, Rockers and Individuals with Italian style suits, tab shirts and extended point winkle picker shoes, the Rockers drape coats, drainpipe trousers and “brothel creeper shoes” and girls with their full skirts held out with layers of net. The girls would give the boys a thrill with a glimpse of stocking top and suspender. 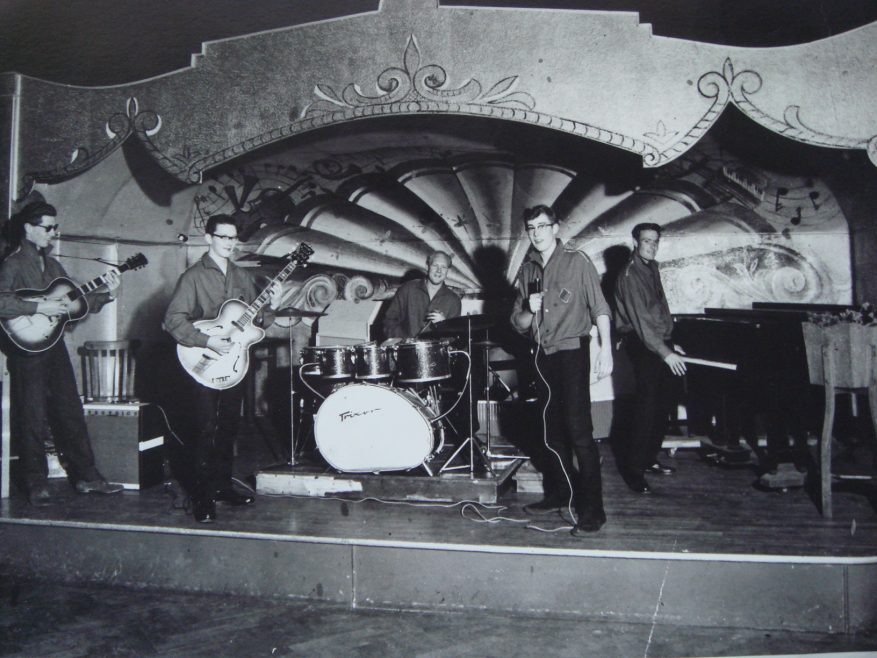 On Friday and Saturday nights and Sunday afternoons the place would be full of jivers and twisters. Fridays & Sundays were records, with Saturdays being the most popular, having local bands -The Red Diamonds with Chas Hall(piano), Tony Arthurs (vocal), Colin Carter (rhythm guitar), David (Gilly) Rodman (lead guitar) and Les Woods on drums. The Whirlwinds with Fred Ford on keyboard, Bert Pulham & Peter Gosling guitars, Dave Scates on drums and Ron the singer. They later became the Force Five with– Bert Pulham, Dave Scates, Peter Gosling, Dave Osborne and Ron the singer. There were other visiting bands and on one occasion I even remember Gene Vincent making a guest appearance.

One of my favourite numbers – Drumbeat – was a drum solo played by Les, drummer with the Red Diamonds.

The dances were run by Keith Randal and keeping order in case a fight broke out were, Wallace Faber and for some time my friend big Geoff Lawrence. Trouble was always on the cards if a certain person turned up!

The Casino drew people from far and wide with between 200-300 on Saturday nights. The ballroom had a sprung floor and when dancing was in full swing, if you stood underneath in the slot machine area and looked up you could see the ceiling going up and down.

For many years the Casino Ballroom was also a great place to be on New Years Eve at the Police Ball and in later times the New Years Eve dances run by Nellie Geak & co.

Unfortunately, with the opening of Kings Club and The Lacarno in Basildon , with resident band The Dave Clarke Five, the crowds drifted away, resulting in Rock and Roll events at The Casino coming to an end.