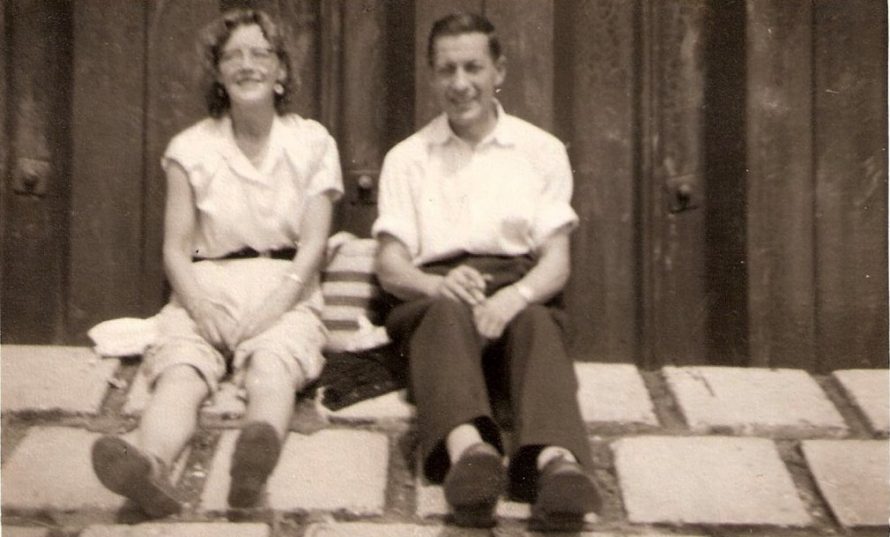 Similar time period, Mum & Dad relaxing by the wall base near Thorney Bay

George & Annie Wonnacott were both born & bred in the East end of London & into working class families residing within the vicinity whilst changing rented accommodation fairly often after marrying (sometime during the 1930s), at the outbreak of WW2 they became evacuees and moved some 30 miles or so distant further out in the county of Hertfordshire to the lovely rural area of a small Market Town called Buntingford, George was a mere factory operative/labourer who earned a very basic salary.

After residing there for over two plus decades they eventually moved into the next County of Essex settling on Canvey Island in the mid 1960swhere they spent their final days, this was now some 60 miles from Buntingford & around 30 miles from London again but in the opposite direction, during the many hours of idle chat with my parent’s the subject cropped up of their marriage which they revealed was a simple low key registry office affair, then i pressed (out of curiosity) as to whether they bothered with any form of Honeymoon following their wedding vows, & was pleased to hear that they did indeed manage to afford a break albeit just for a couple of days which was the total time taken for a so called ‘Honeymoon’ period.

Pressing them further i managed to prise out of Dad where & when this all took place & was both surprised, shocked & amused all at the same time with the answer they gave, remember!, going abroad for whatever reasons for any length of time up until WW2 was mainly a pleasure afforded by the wealthier class, so it was more commonplace for folk to seek some form of holiday within the confines of this little island or perhaps a boat trip for a little more romantic setting across the channel maybe to France or some other easier place accessed via a ship/boat trip.

Dad had little in the way of savings, plus, paid holidays were few and far between back then so it was arranged for a single two day weekend Honeymoon, so where did this special celebration period in their life take place?, it could not be too far distant as time & money was of the essence back then & Dad had to return in readiness for work resume on the Monday morning, so where was this memorable place going to be, Blackpool maybe?, Yarmouth possibly? Weymouth perhaps? or even Southend probably??, Noooooo!!!!.

The place chosen was the grand resort of (wait for it!!!) Pitsea!!!!!, now I have nothing against Pitsea itself or the folk that reside there, but what the blankety blank attraction does that place have that would tempt a couple to stay there for a ‘Honeymoon’ celebration??, the mind boggles!!, it’s hardly ‘Eldorado’ after all!.

Ok!, so now, full of bewilderment, I was completely intrigued to find out, understandably for many working class London City folk any simple form of break away from the hustle & bustle of the claustrophobic everyday grind was a welcome break to spend even a single day away from using any and every form of transport that would convey them to a different destination & change of scenery, many used a tent as a temporary form of shelter perhaps transported via car (if they were fortunate enough to own) along with even a small caravan towed behind maybe, whilst perhaps such things could be even hired from certain organised so called holiday camps that were sited around the country, anything!, just so long as it offered some form of break from the norm, (some even opted for a countryside break rather than a coastline one in preference).

So why ‘Pitsea??), i pressed for an answer, it transpired that Dad did not have sufficient finances available to stretch to the resort of Southend!, so had to be content with Pitsea using a weekend Bed & Breakfast scenario, (can one imagine such a suggestion in today’s society, Divorce proceedings would be in place immediately following the wedding vows, LOL!!), but in those old fashioned times it wasn’t always the trimmings and niceties that was at the forefront of marriage among the poorer classes, it was the act of joining two folk in the matrimonial vows to love one another for richer or poorer until death do them part, like most couples they had a few ups and downs during their married lifetime together, but nothing major!, should a rare occasion involve a row at no stage was the word ‘Divorce’ EVER mentioned, nor were any suitcases packed with leaving coming into the equation, they lived happily ever after until their departure via death from this world, such, (it was) that matters were settled in a sensible matter with both parties knowing & accepting what their expected roles within a marriage entailed, life was accepted using what was affordable & available which for many were few and far between, but it was not always about material things but the feelings that were most important to the heart which mattered and controlled reasoning’s.

After all!, one should never lose sight of the fact that no matter how hard done by many of us feel we are from time to time, never forget there are ALWAYS those in the world that are far, far, worse off in many ways than we ever were (or believe we are).

zoom
Yours Truly Pictured Sitting on Canvey Sea Wall around 1959/60 with big brother (by 9 years) to the left
Peter Wonnacott
zoom
My brother on the left with Mum centre and myself outside my uncle's caravan around 59/60 sited at thorney bay camp, my uncle was good friends with Mr Fielder also with Mr Jones at the corner shop after he himself had moved on to the Island near retirement.
Peter Wonnacott

Sent in by Peter Wonnacott