As the title suggests it is a series of memories of Canvey Island.

To start I was born February 1945 on Canvey Island, Sunshine Villa in Surig Road.

The road wasn’t hard surfaced,  just grass with a worn pathway each side allowing access to the properties.

October the same year a move to Avon Road, still on the Island and the next year, in August, to Edmonton, north London. It was nearer to my father’s place of work.

The two moves above are recorded in my National Registration Identity Card, for those under sixteen years. The card was valid until February 1961.

Sunshine Villa was where my aunt and nan lived, on my father’s side, so we visited frequently, otherwise known as a cheap holiday!

At Edmonton, the facilities included an outside toilet, galvanised tin bath on a nail on the outside back wall and gas heated copper boiler for hot water.

Surig Road was similar except the toilet was of the chemical type, an Elsan? It had to be emptied into the cess pit in the corner of the garden.

I do not remember the 1953 flood, but I do know that my relatives had to be re-housed. Next time we holidayed, it was a brick built bungalow in Point Close, Leigh Beck, with bathroom, toilet and hot/cold water. Modern to what I was used to but it didn’t seem to bother me. Where the football club now is, it was a grass area where I used to play.

Sometimes we (me and parents) would take the bus to the railway station at the weekend when everyone was trying to get home after a day at the seaside.  There was only the one road which became congested due to the frequent opening and closing of the level crossing gates and I  remember that the buses would go on the outside of this traffic, on the wrong side on the road, the excuse, I believe, being that passengers on the bus might have to catch a train at a certain time.

Having arrived at the station, the buses terminated there and didn’t leave the Island, we would cross the railway and climb to a vantage point where we could look down and watch the chaos.

The Chapman Lighthouse was replaced by a bouy with a large and rather noisy bell, I think. Sometimes you could hear the bell, which at night, was rather spooky!

I have a picture in an old Model Engineer magazine that shows a small narrow gauge industrial steam locomotive on Shell Beach.  Unfortunately I can’t locate the magazine.

I feel sure that near Surig Road was a bungalow that had as the main building a redundant railway carriage.

On a recent visit I couldn’t help but notice that the Monaco area (helter skelter etc) is now a building site for flats.

I do hope that the above will nudge people’s memories and they will comment/correct my ramblings. 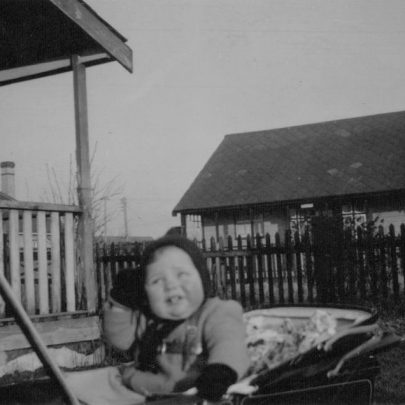 Forget the baby, this is to illustrate the type of bungalow. I have lost a lot of weight since the photo was taken! January 1946.
From the family album. 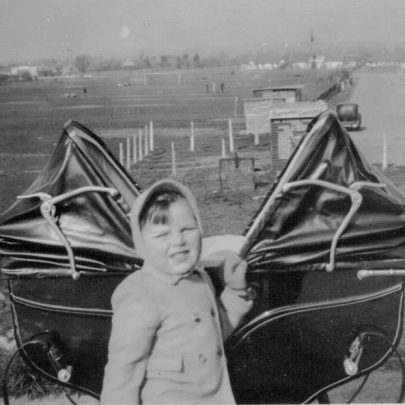 Again forget the foreground. It shows the view from the sea wall with the Monaco just out of the picture to the right. Date March 1948.
From the family album. 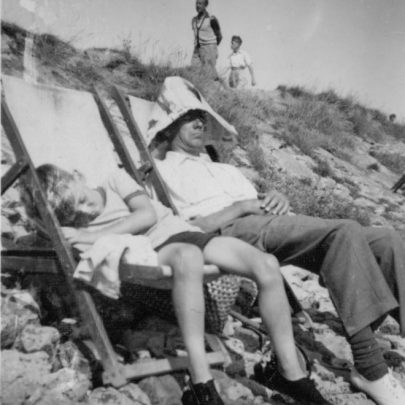 Before the sea wall was re-built, August 1953.
From the family album.