My memories of Furtherwick Farm. 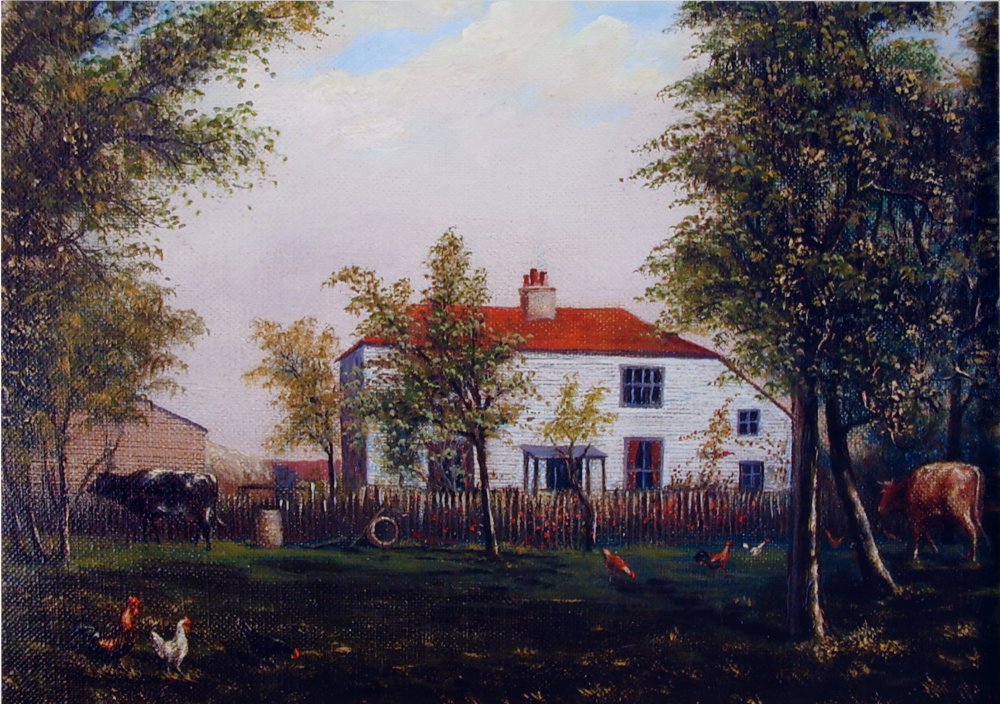 Picture of Furtherwick Farmhouse painted by Charlie Shayes in the mid 1920s.

My Grandfather, G.H.J.Chambers, purchased Furtherwick Farm in 1916 at Auction at Rochford, together with Little Gypps Farm of which I had a copy brochure, but has been lost. He was at the time living there with his family.

Strangely there is a copy auction notice dated I think 1922/23 at which time my Father H.E.Chambers having returned safely from WW1 and his Wife Doris Chambers were living and farming there and renting it from my Grandmother. (In those days it was common practice to put property in ones wife’s name in case of going Bankrupt. I can only guess that there was a family fall out which was resolved). I know that there are still many title deeds with Alice Chambers on them. (Copy of these documents can be seen here)

I was apparently conceived there, but born in Ilford, no bridge, no services, mains water arrived at the farm after I was born, my father told me that the doctor at the time, 1923, of my arrival, was one that he would not have trusted with his live stock, so as my Maternal grandmother was a midwife living in Ilford, that was where I was born.

When I was young I was told that it was 300 years old and from its construction I can believe it, but in spite of countless hours of research, nothing of use, pre say, mid 1800’s, but it was probably built around the date of the Lobster Smack.

It was large for Canvey with 13 Rooms, 4 large (very) and the farm could be split in two, the smaller part having 2 of the large rooms and one small, plus a kitchen when split, or harness come general it use including a cast iron boiler when one house. The other part 4 extra, one made when a staircase was removed to make a bathroom. The extra three rooms were at the eastern side, and were two dairies, cool rooms, with a long room above the two, reached via another staircase, this could be divided into two if needed for bachelor farm hands, one opening from the kitchen and the other two a couple of steps down from the dining room, (later altered). There was a staircase from each main room to a landing, with the two smaller bedrooms and bathroom, with two short stairs from there, leading to a smaller landing to the two main bedrooms. The communal front door opened into a passage 10/12ft long, the width of the central square brick core of the building. Downstairs it originally held two back to back inglenooks. The two kitchen fireplaces and external chimneys were old but not original, one with a cast iron range. 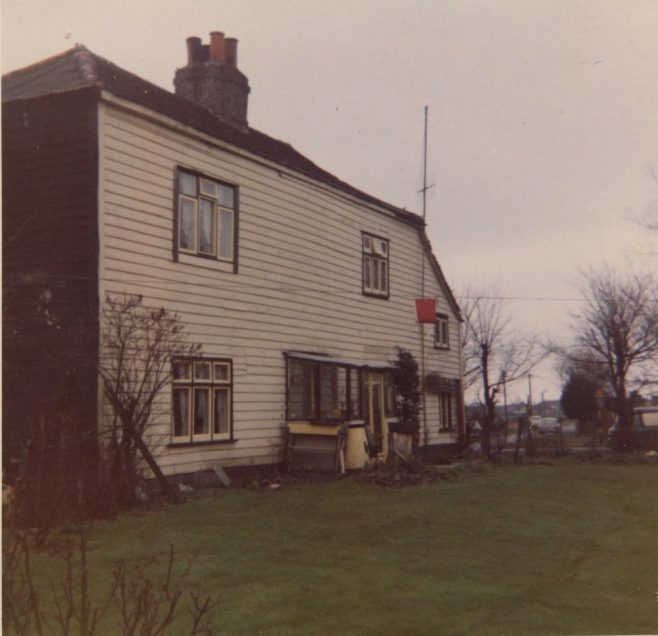 The house stood on corbelled brick foundations on one of the high points of the island (the flood did not reach it). It had brick on earth floors, some cemented over in the 20/30s, probably when dad purchased it from G.dad. The frame was of oak, I still have a length 6’x 6′ but unfortunately with too few rings to date.

The foundations had settled on the south side both sides of the front door, not noticeable on the ground floor as it had probably been levelled with cement.

The two large Bedroom floors dropped in matching corners, to such an extent that a 4ft 6inch bed in the centre of the eastern wall had one foot on the floor another on a house brick another on two, the last on a stack of something or other very firm, or the bed would have run away. One night my wife and I came home, having imbibed well if not wisely and were a little concerned to find ourselves standing together in a corner giggling like idiots. In that room if one dropped a marble from the windowsill it would land 4/6 inches out from the foundation.

In the 30’s the other bedroom was fitted with a full size table tennis table. Very basic wireless then, for entertainment. There would be a couple of dozen table tennis balls on the floor, you did not bother to pick them up when you missed – they all trundled at a high speed down into the corner.

The first time that I tried to wall paper the bedroom we had to take it off quickly, as my father said, forget plumb lines and levels and go by eye.

Until the 30’s, from that room one could see the ships and barges going up down the Thames. There was only Masonwick, then a bungalow and the barn at Lubbins between the farm and the sea wall.

Not long before it was demolished we really needed more light in the kitchen and in the process, when I removed some lathe and plaster I discovered that the 4×2 uprights were painted/distempered blue, to within l/2 inch or so to the outside edge nearest the weather boarding. I discussed this with an architectural historian at Chelmsford who said that it was probably Wattle and Daub originally. This still seems unlikely to me, but the weather board/ shiplap call it whichever you prefer was from a later date as it covered some unused windows and doors. One still with the window and frame including glass still there. The chimney stack for the harness room was some 3 inches away from the exterior wood and would have completely obscured the Window. 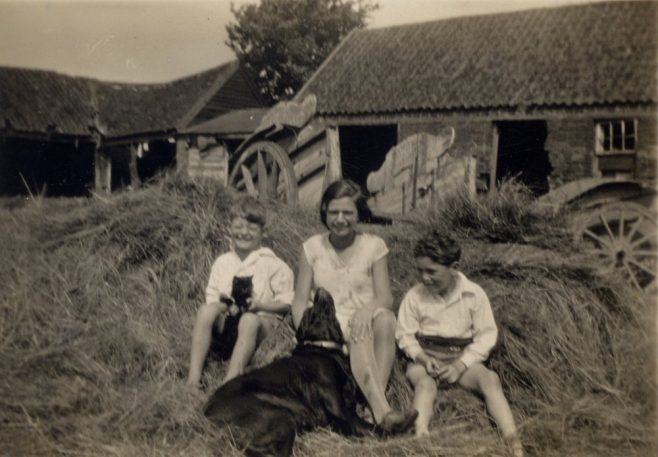 The really odd thing to me is that the house was timber, but the barns were old and dilapidated but built of brick enclosing a square farmyard.

The house stood on the site of what is now the job centre, the barns and farmyard are now the Rio Cinema and the two shops. There was an orchard from the farm to the south end of the row of almost detached houses facing the road.

To many reading this it may sound weird, but I loved it and had I been rich enough I would have had it rebuilt in a field, but by 1970 its time had come, trapped as it was between the commercial and domestic buildings. 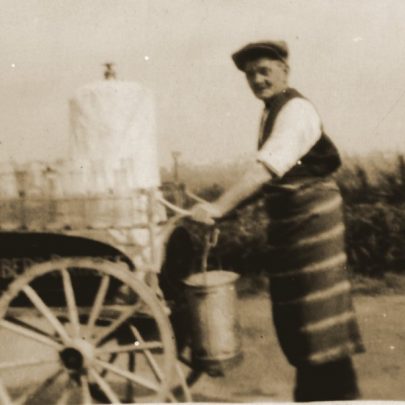 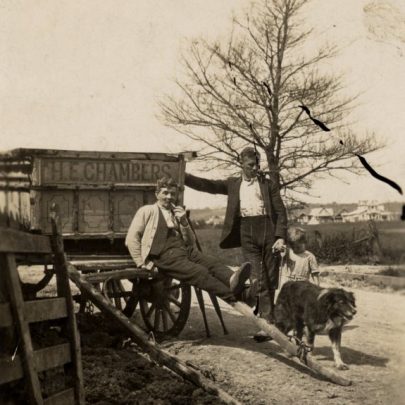 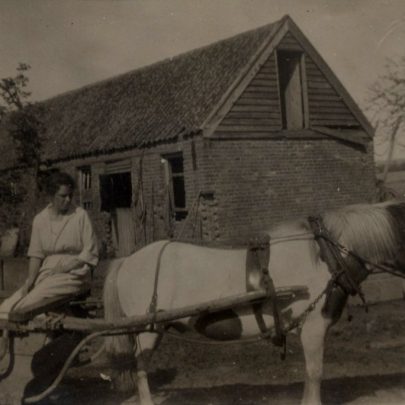 George's mother Doris on a milk-cart pulled by Tim ,the pony.
G.Chambers 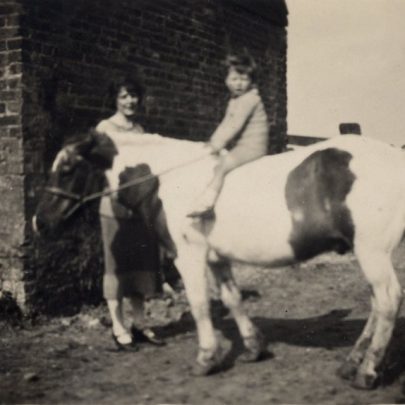 George astride Tim, the pony with his mother holding the reins.
G. Chambers 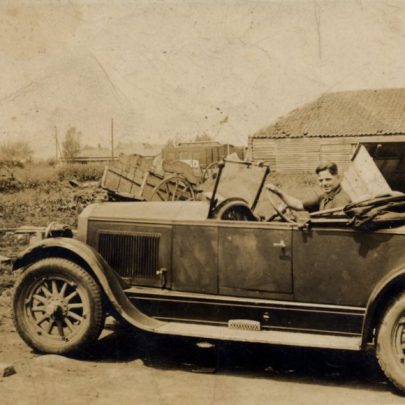 George's uncle, Jack Hoy in an old Buick that was a permanent fixture in the farmyard for many years.
G.Chambers