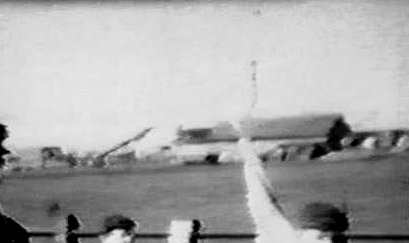 In the mid twenties the 60 acres of land that still went with Furtherwick Farm comprising the Marine Approach, Driveway and Parkway area were being developed, so my father rented Little Gypps Farm again, some 60 acres from his father and built a modern milking parlour with machine milking next to a very sad old house which was collapsing and the only thing that I remember about it, was that it had a quince tree in the small garden which I mistook for a furry pear and tried to eat it! It was the 1st time I had encountered a quince, then walked around for some time with my lips pursed as if trying to unsuccessfully whistle.

My father was trying to establish a good pedigree herd of cattle which he did. At the same time improving the quality of the milk to the extent that he twice won the Burton small herd challenge cup for the best milk in Essex, for which we still have the replicas, the herd was producing Grade A T.T. Tested milk for the Island.

At the same time he was leasing a 360acre farm at Wickford, the milk from there also Grade A T.T.Tested went to Howards Dairies. There were also of course the milk rounds and two grocers shops. one at Smallgains, the other on the corner of Chamberlain Avenue. Small Gains was closed about the time the shops and bottling plant in Furtherwick road were built. I remember going with my father to cattle shows where he was showing bulls (the calves of prize bull fetched more cash). In the field where Thameside Crescent is now, there was a very large sign, more of a hoarding, in large letters reading. 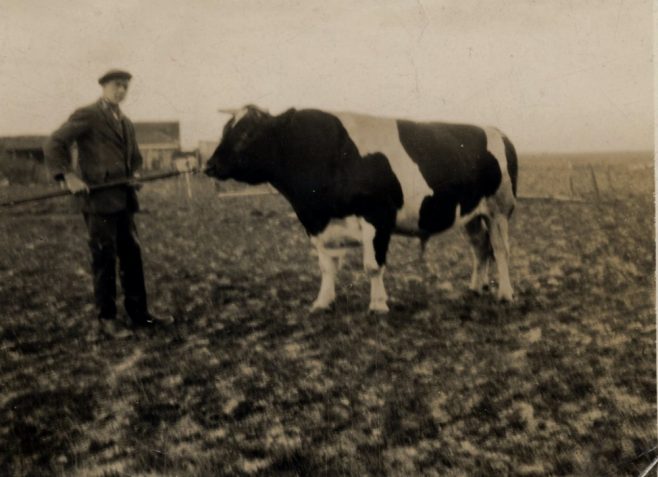 Prize Bull which raised the quality of the herd

I still encounter people who when they were young came to Canvey on day trips, got off the bus at the Haystack where their parents had a drink, then on to the seafront, stopping on the way at Furtherwick farm for glasses of milk for the children, at 2d per glass. I tell them if it was in the holidays it was probably me serving them, milk 2d per glass, milk and soda water “disgusting” 3d, milk with a raw egg whipped in it ditto, 4d, milk with a thick layer of a thick layer of fresh farm cream on top 4d cholesterol eat your heart out.

A map of the farm can be seen here

At the time of the Munich crisis the Army turned up with guns and tents then quietly moved away until the outbreak of WW2, when they turned up again with mobile 3.7 inch AA guns, much to the disturbance of the cows etc they were just behind the milking parlour, put yourself in the cows position! ‘Early morning and evening milking in the winter would be in the dark, you are quietly eating your rations at the front end, at the other generously donating milk, when a bloody great gun goes off in your ear, you would kick out knocking the cowman off his three legged milking stool.’

Later these guns were replaced with static 4.5s plus a searchlight, attracting a stick of bombs, which started from near Denham road in a line towards the gun site but stopping just short. In the process killing some cows and severely wounding others which had to be put down.

After the war the farm was compulsory purchased for the council estate, at which point we gave up farming and concentrated on the Grocery side.