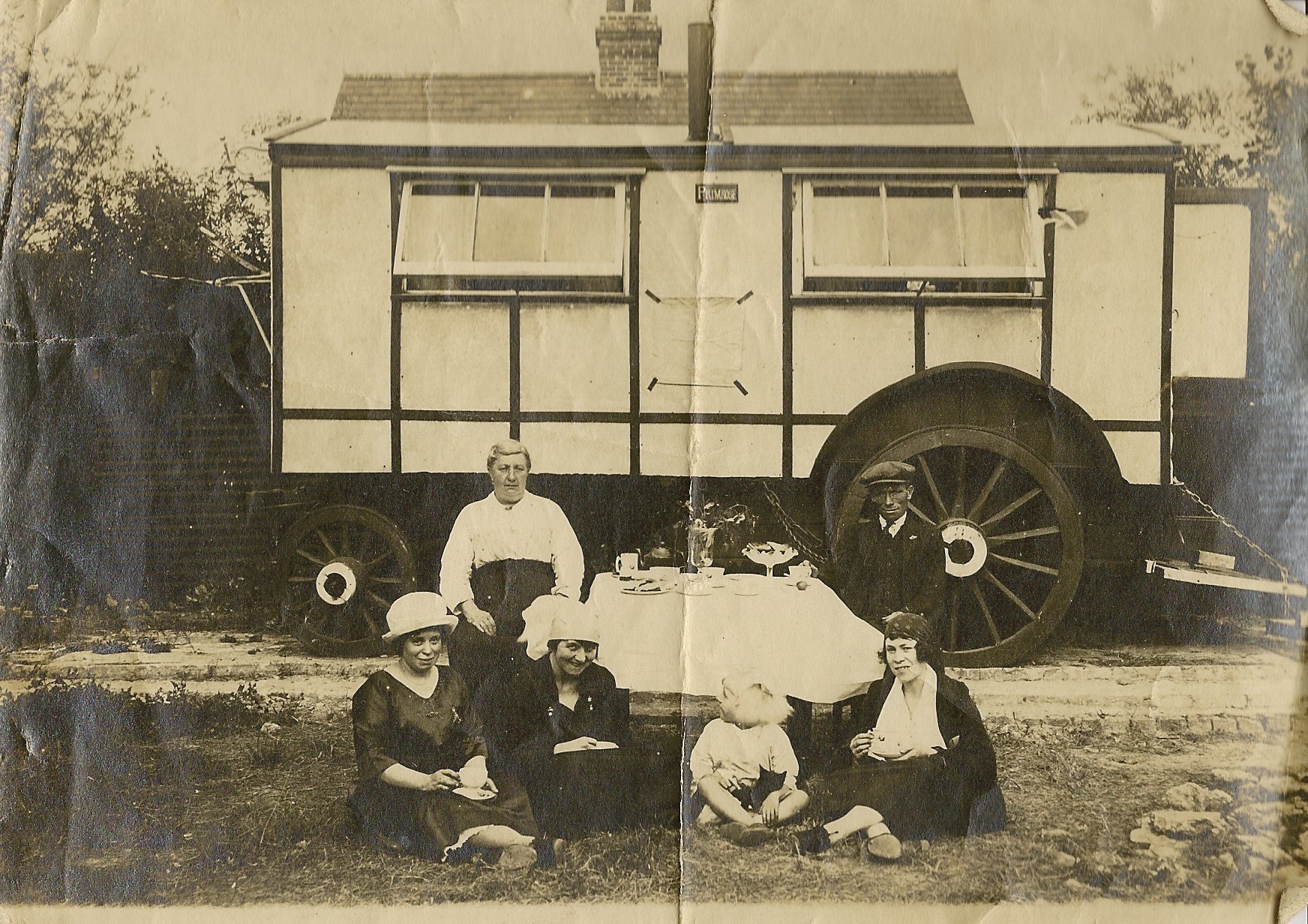 When my mother passed away some years ago, She left me some old photographs relating to her fathers side of the family. The family name was “Crow” and the place was Leigh Beck, an area of Canvey on Sea. When these family members were alive, I was too young to remember much about them. Due to the recent increase in the awareness of being able to trace one’s family tree with progammes such as “Who do you Think you are?” on television, has led to my interest in tracing my own family tree. I soon realised, the power of the Internet, by typing in names and places which I thought may be in some way connected with the various branches of my “Tree”. Web Sites such as Canvey Island Archive have been a tremendous help to make more sense of the history surrounding people’s past, giving an interesting background to simply, Birth, Marriage and Death dates. Hopefully the few photographs, names and dates I have, will return in some way the benefits I’ve received from other people’s contributions. 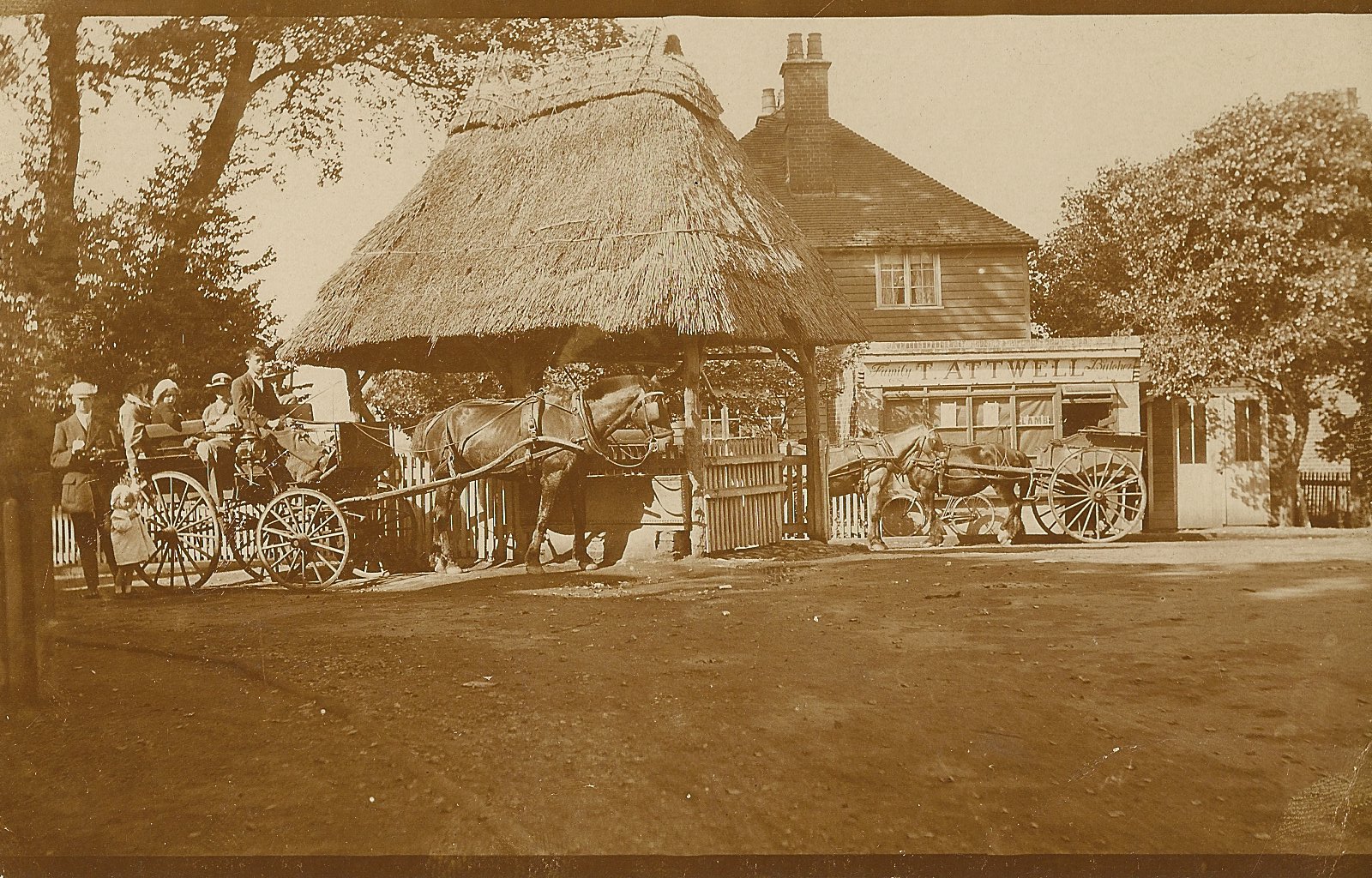 Joseph Edward Crow (Senior) was born in the East End of London in 1856. His father and His father before Him were involved in the “Public House” profession. Something I’ve only recently learnt, is the employment description, “Chop House Keeper,” which I discovered, refers to a meeting place for businessmen where good quality food and wine was made available. Joseph, followed in his father’s footsteps, becoming Landlord of the Blue Anchor Inn in the old Limehouse area of Stepney, the year was 1899. Joseph was married to Emily nee’ Bull and they had five children, William Gordon, Gertrude Emily, Joseph Edward (junior), John and Maud. The exact length of time the family lived at the Inn, I’m unsure of, what is known, by 1911 the family were living in the Leigh Beck area of Canvey on Sea.

I’m grateful for the information linked to this web site, which provides information and pictures of memorials within St. Katherine’s Cemetery. The first reason being, the death of Joseph Edward Crow (Senior) is recorded, the year, 1911. Why had the family moved from London to Canvey? I do not know, so far I have not been able to trace the death of Joseph’s wife, Emily, did she die in London? if so would that have encouraged the move?

Gertrude Crow is the link to the first proof of an address that I have. This is a “National Registration Act” card, dated around 1915, it reads- Gertrude Crow, Barmaid, aged 22 of St. Aubyns, Canvey Island, Essex. I know from old letters that Gertrude was indeed a Barmaid, although during this period in time not on Canvey but in the Romford and Ilford areas.

According to the 1911 census, St.Aubyns was the home of 30 year old Bricklayer, Alfred Wainwright and his Family. I assume that during the period of the First World War, Maud Crow also lived at St.Albyns, I do know from an old photograph, Maud was an Ambulance driver, furthermore a letter I have is addressed to- Maud Crow, Jobmaster, Canvey on Sea. A Jobmaster as I understand, is a person offering to provide transport of people or goods by horse-drawn carriage. 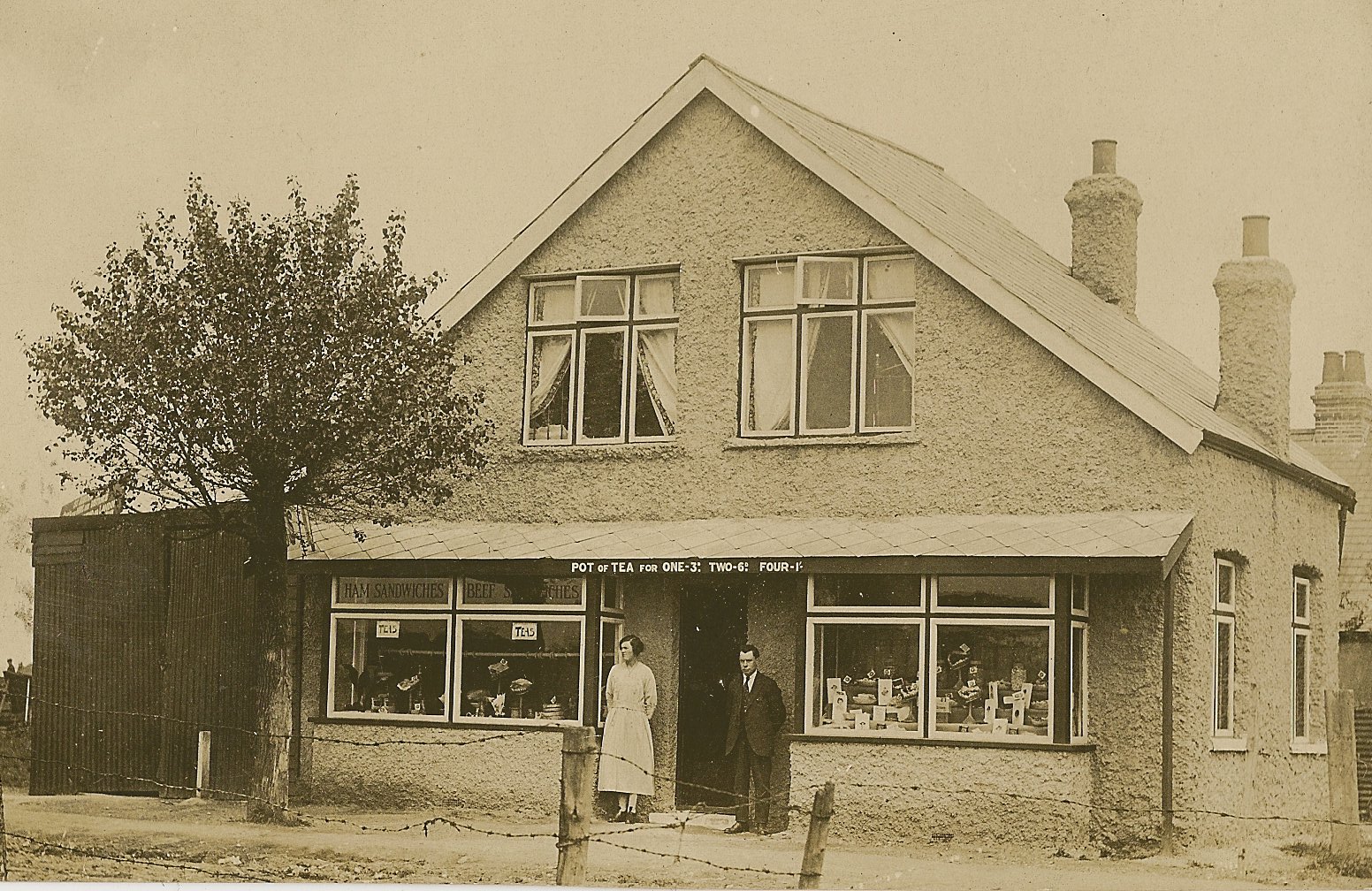 Joseph and Eleanor outside Tearooms

This now brings me to William Gordon Crow, I know once again from old photographs, he too was a Jobmaster. Further more I have always been led to believe that he opperated the first Omnibus service on Canvey under the name of “Black Knight”, do any readers of this article know different?

The photographs which accompany this article and in the gallery below, cover a period ending in the late 1950’s . As can be seen, there are various scenes linked to horses, also tea rooms feature. I know one or other of the “Crow” family were involved with a tea room, whether their own business or working for others and the actual whereabouts on Canvey, I’m not sure. Once again, over to anyone reading this article who may be able to help?

Other information I have is that Gertrude was living at a home called, St.Cliffords, also Yamburg Ave is mentioned, the time period was around 1948. Six members of the “Crow” family lie buried within St.Katherine’s Cemetery. Joseph Edward Snr. and John already mentioned, William Gordon 1884-1946, Albert Richmond 1898-1951, Gertrude Emily 1886-1959 and Maud Mary 1896-1960. Joseph Edward (Junior), met and married my Grandmother, Eleanor Butt. Joseph bought a farm in the nearby village of Runwell, sadly he died whilst my mother was still a young girl, so I have no personal knowledge of him. As a young boy, aged three I can just about remember my two Aunts, Gertrude and Maud staying at the farm where I lived with my parents and widowed Grandmother, the year? 1953 and the reason, the “Great flood”. 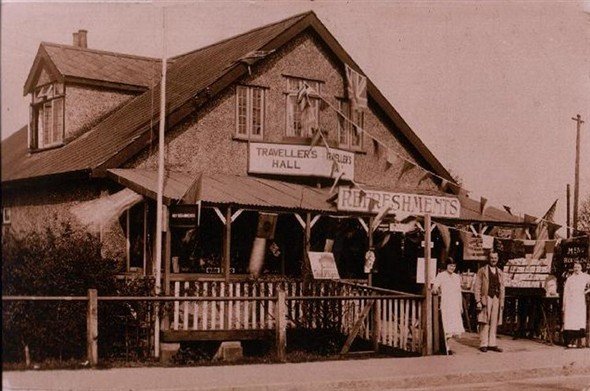 (Editor) Because of the discussion in the comments below I have added a picture of Travellers Rest to show against the picture above. It does not look like the same building)

See Part 2 of this story HERE 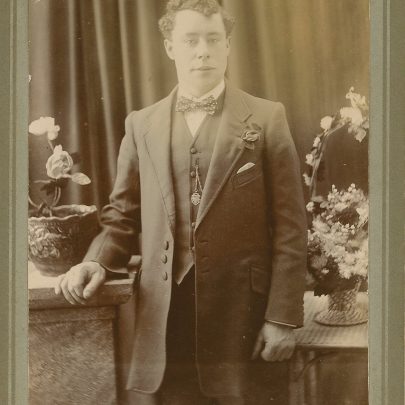 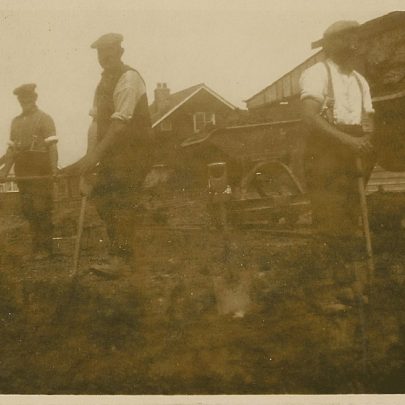 Unknown workmen and where?
John Hawes 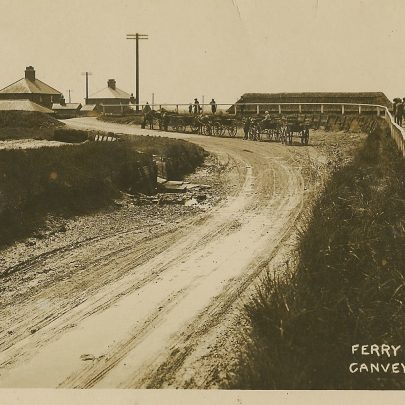 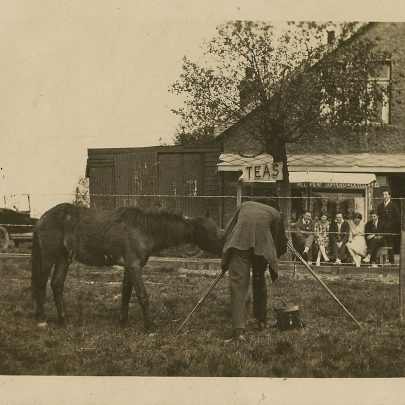 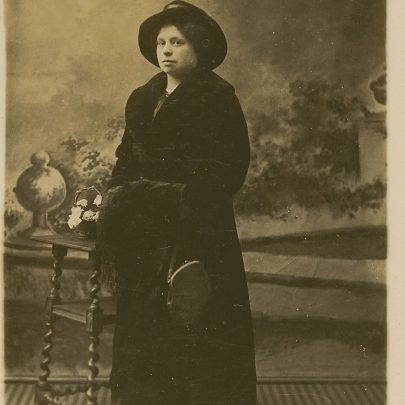 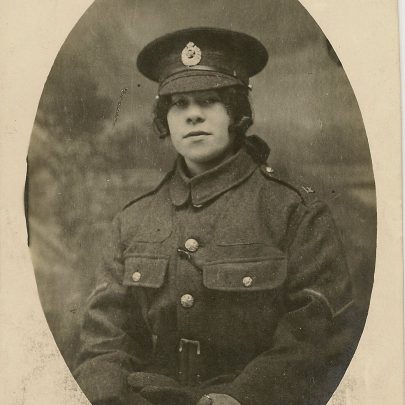 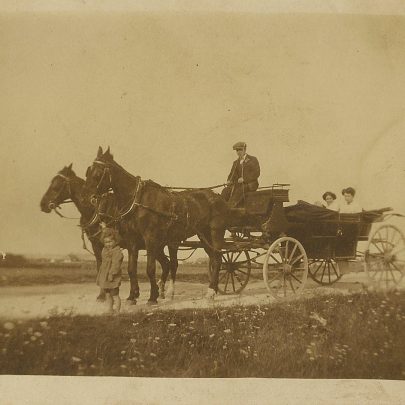 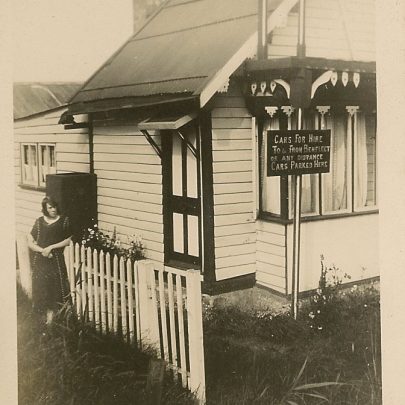 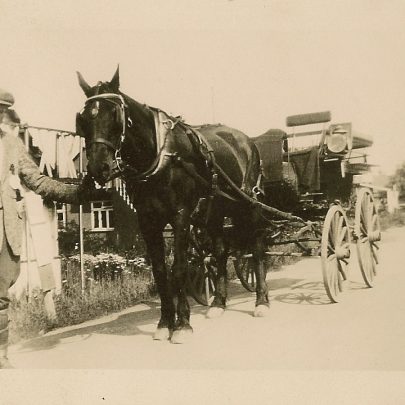 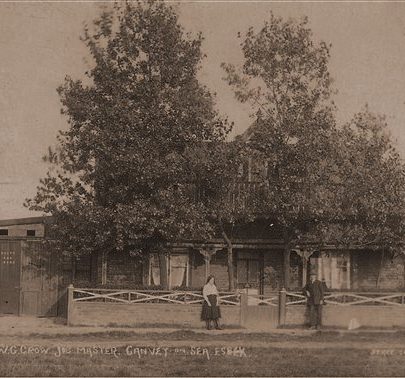 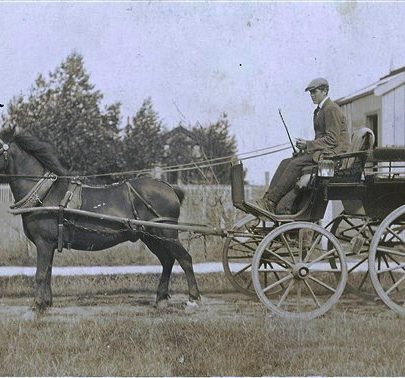 Who and Where? Canvey
John Hawes 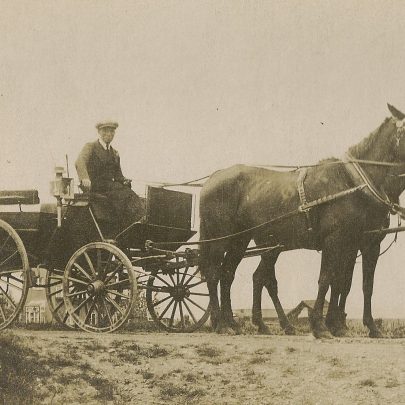 View to the Sea.
John Hawes