I have always been interested in the history of Canvey & surrounding area, having been partially instrumental in its making over the years, I now feel compelled to add further memories to the Archive website for others to read and enjoy. I recently read an article on the Canvey Community Archive website regards Hester’s monorail/railway that started at Wintergardens. However, there appears to be uncertainty regards the seafront terminal of the line e.g. whether at Shell Beach or the Junction with Eastern Esplanade/Station Road /Marine Ave area.

There has long been a rumour within our family that our original family property (Dalwhinnie) pictured below and originally fronting Station Rd was the seafront terminal for Hester’s monorail/railway. Obviously, this was long before my time. Unfortunately, I no longer possess written evidence such as deeds to the property. However, in the 70’s, the land was sold & developed with three, three-bedroomed houses and three bungalows built on the plot. These properties still stand, and I suggest that any evidence would be shown on the deeds of these properties. 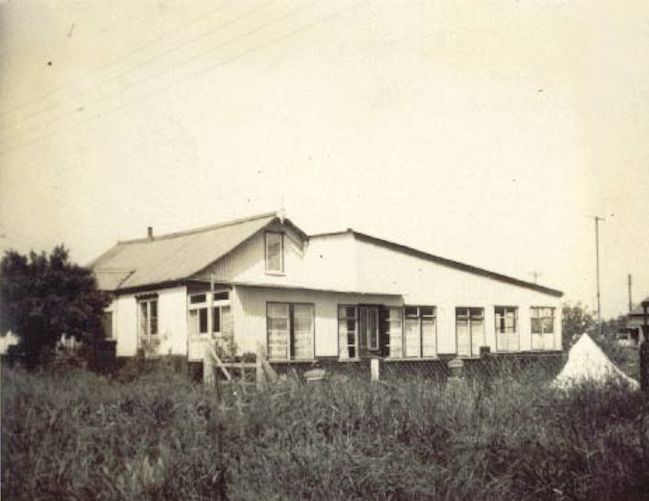 The property is my late Grandfather’s & parent’s bungalow named ‘Dalwhinnie’ that originally fronted onto Station Rd. The rear of the property (shown behind the tree in photo) & fronting Marine Ave, (the grass road shown in photo) was easier to use and eventually became the front entrance to the property.

My Grandparents moved to Canvey in the early/mid 1920’s and their property appeared to be among one of earliest on the island. The property was a single storey chalet style with approx.14 rooms; they let out rooms on a holiday let /bed & breakfast basis, e.g. early boarding house. The construction was usual for the period being an initial green/later red painted corrugated-tin roof, / white corrugated- tin clad timber frame, later timber roughcast construction walls, with a garden measuring 140 x 210ft which was compartmentalised into part small holding and part mixed Rose garden and part country garden for leisure use. The total garden area spanned Station Road to Marine Ave. I can recall four other properties in Marine Ave, one towards the South Parade end consisting of an old railway carriage clad in white roughcast another towards the seafront/ esplanade end and three others spread along the other side of road. The property opposite Dalwhinnie was an old railway carriage with an earthen floor occupied by an old woman and her grandchild (Iris). There was also another old railway carriage in the rear of another garden across road and slightly to the left of our property, which used to house the grandmother of the house owner. Both carriages were wooden construction & black in colour similar to a 1940/50’s type guard’s waggon. The old green painted Marlboro hotel was situated on land between Seaview Rd and Station Rd, at its junction with Eastern esplanade, now an empty field.

Along with many other properties, Dalwhinnie’ was flooded in 1953, thankfully no casualties and after the clean up there remained a tidemark approx 6’ up the inside walls of the building.

I can remember the property deeds indicated the plot was drawn from land that used to be part of Leigh beck farm, and the purchaser was Mr F. Hester for part of his planned Seaview estate. The plot was clearly shown as one of many derived from Leigh beck farm which later became private bungalows and holiday boarding houses. I can remember the grass road shown in front of the house remained as grass until mid-1960, when the present main drainage and concrete road were laid. 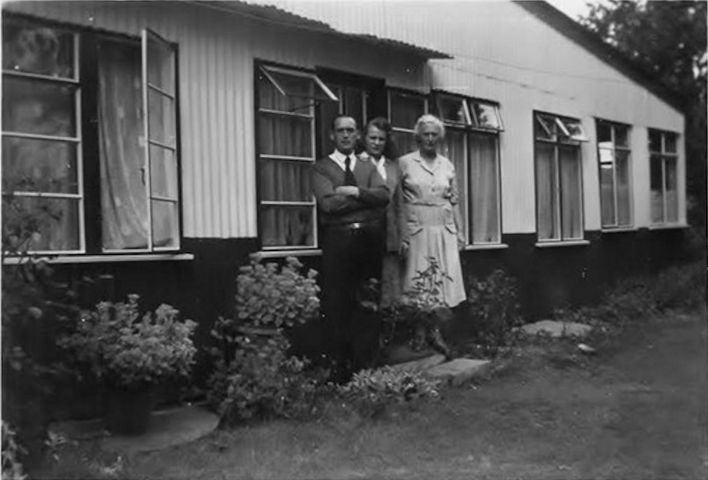 Side view of Dalwhinnie with parents and grandmother Photo taken circa 1951/52.

Up until the late1950s they ran a boarding house/ B&B business from the premises, clients were predominately from the East End of London. Until the mid1960’s the property was named Dalwhinnie however, from the mid 1960’s when the main drainage and cement roads were constructed a number 35 was assigned to the property and officially it became No 35 Marine Ave.

I remember as a young lad the old seawall was perhaps no more than a six foot high grass topped earthen mound that followed the meandering shape of old Dutch Canvey. It consisted of nothing more than numerous wooden stakes skewered into the top of an earthen mound with a multitude of various cement/flour filled wooden barrels on the seaward side, there was also a large open dyke on the landward side that we lads used to float ours toy boats in.

The cement/flour barrels that lay on the mud next Chapman jetty for many years were actually a survivor of one of the many Thames shipwrecks. For many years, we lads assumed they were gunpowder barrels from ancient times and created wondrous stories around these mysterious lumps mostly involving pirates and sea battles between square-riggers. Quiet a disappointment when we discovered the truth. They were actually the cargo from the SS Benmohr, which was built in 1893 by A. Stephen & Sons of Glasgow and launched on the 24th October being finished in November 1893. On 6th February of 1902 when she was leaving the Thames bound for India she was in collision with S.S. Banffshire a steam refrigerated cargo ship that sailed the route from England to Brisbane. The two ships collided in thick fog off the coast of Canvey. The Benmohr subsequently sank just off Thorney Bay where she lay until June, when towed to the Tyne for repairs.

(The story of the SS Benmohr can be read here)