The Canvey Hospital    Oh where, Oh where did it go! 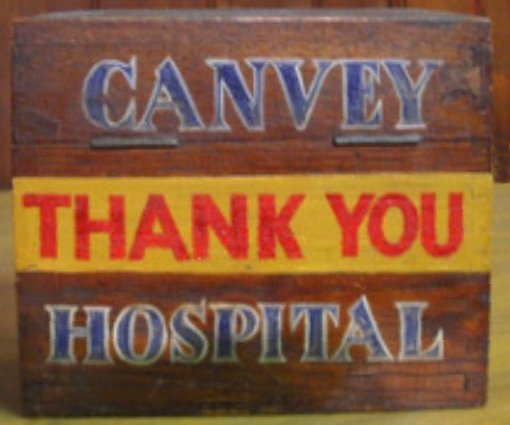 In my last contribution I mentioned that the early ’30s were a dormant time for the Emergency Hospital Fund. Indeed, after the Playfair fair, in what appears to be 1931, nothing very much appears to have happened at all until July 1933, when a meeting was held at ‘Maple Creek’, a house in the High Street, which many will remember, at which Mr G Phillips took the chair, and as a result a note appears in the Canvey Chronical for August 4, to the effect that a public meeting would be held with a view to awakening interest in a fund of which it was felt a large number of people knew nothing, the activities of the committee having been allowed to lapse. The Carnival that year was a most successful event, and, raised some £263, according again to the Canvey Chronicle, but it was in aid of the Essex Blind, not Canvey’s Emergency Hospital. That there was little interest at that time in the proposed hospital is evident from the Chronicle, for until the issue of August 4, there is no mention of the plans, although the Nursing Association was busy raising funds for a nurses’ house, which would have some interview rooms.

The meeting to ‘raise interest in the hospital’ though, must, have had some effect for beside the Canvey Gala, as the event for the Blind was properly known, there was a carnival procession on September I, organised by Mr H Dellaway of “The Haystack”, which realised £24.4s.10d. for the Southend Hospital, and as a result the Hospital Committee made arrangements to try again.

They may have done in 1934, but I can find no record except a brief mention in that for 1935, to the effect that when the manager of Barclays Bank opened the collecting boxes in 1935, he found more than the previous year! However, after the last edition of The Bulletin was published Mr Aubrey Stevens of the Historical and Conservation Society came to see me, with a full report of the 1935 Carnival which had been given to the society by the late Mrs L Manthorp whose daughter Yvonne was Carnival Queen.

The minutes book also makes it clear that money had been steadily if slowly been coming in, for it was decided to purchase £100 worth of War Savings Certifi­cates, and also to obtain the Park Field, Leigh Beck, as a site for the Hospital.

The 1935 Carnival report, from the Southend Standard shows it to have been a three day affair, and organised not by the Hospital Fund, but by ‘the newly formed Canvey Island Carnival Association’, and it produced profits of some £500, to be split equally between the Emergency Hospital Fund, the Nursing Association, the Canvey St. John Ambulance, and the Southend General Hospital ‘as an apprec­iation of the fact that 50 Islanders were treated there last year’. Many well-known names are mentioned in the Standard’s report, but perhaps I should just mention that one Master Fred McCave won a prize in the boys’ fancy dress.

We can therefore assume that by late 1935 the Emergency Hospital Fund had at its disposal some £150 in cash, an account at Barclays, and £100 in War Savings Certificates. It is possible that there was more, because in October of that year it was provisionally agreed to purchase the land at Leigh Beck for £500.

Not for the first time, the committee had second thoughts, because by May 1936 two other sites were to be investigated, and by the autumn of that year a deposit was paid to Mr H Price-Powell of £200, being the first instalment on the land that all during the war had, as I well remember looking out and seeing from my bedroom window, a sign saying ‘Site of Canvey’s Cottage Hospital’. It was where the Furtherwick Park School is now, of which more later, Mr Crane, the local solicitor was instructed to carry out the necessary formalities, and it was this transfer that was reported in The Bulletin two or three issues ago.

The Autumn of 1936 must have been the high point of interest for the 30s, probably because it actually looked as though something was going to happen. Indeed, at a meeting held at the Women’s Institute hall high drama occurred when, while the chairman, Mr Brassington, was reporting that someone was prepared to donate the balance required to complete the purchase, a Mr Johnstone interrupted with the news that he had been given, and was holding in his hand, three £50 and five £5 notes from another anonymous donor. Of course this was accepted with alacrity, with the secretary being asked to send thanks, via Mr Johnstone. Collection boxes for house-to-house collections were purchased, at the expense of Miss Clara James, and over the next few months it is clear that money came in reasonably steadily.

By the end of 1937 the treasurer could report that not only did they own the site, but that they had £292 in the bank. Inexplicably to us today this was left on current account, but of course interest rates were much lower then.

While no records can be traced of detailed activities, and again I would be very interested in reports both of Chamber of Trade and Ratepayers involvement, as well of course of any personal memories (for many of those active, if not around them­selves, have relatives who may well recall details); it is clear that plenty was going on for a new constitution was drawn up, an honorary solicitor appointed and the local MP, Victor Raikes, invited to become president.

Guarantors were sought for particular aspects of the work and by June 1938 the treasurer could report £350 in the bank, plus £l.8s handed in at the meeting. It was agreed to aim then at a target of £2,000, and while doing that to start obtaining estimates for the work.

Then came the War.