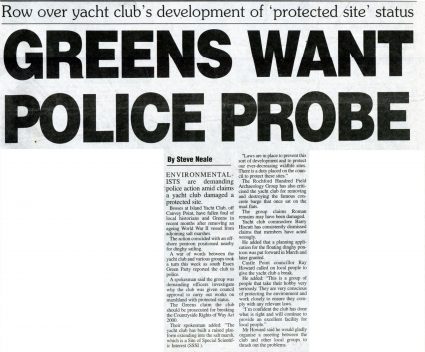 Bosses at Island Yacht Club, off Canvey Point, have fallen foul of local historians and Greens in recent months after removing an ageing World War II vessel from adjoining salt marshes. The action coincided with an off­shore pontoon positioned nearby for dinghy sailing. A war of words between the yacht club and various groups took a turn this week as south Essex Green Party reported the club to police.

A spokesman said the group was demanding officers investigate why the club was given council approval to carry out works on marshland with protected status. The Greens claim the club should be prosecuted for breaking the Countryside Rights of Way Act 2000. Their spokesman added: “The yacht club has built a raised plat­form extending into the salt marsh, which is a Site of Special Scientif­ic Interest (SSSI). “Laws are in place to prevent this sort of development and to protect our ever-decreasing wildlife sites. There is a duty placed on the coun­cil to protect these sites.”

The Rochford Hundred Field Archaeology Group has also criti­cised the yacht club for removing and destroying the famous con­crete barge that once sat on the mud flats. The group claims Roman remains may have been damaged.

Yacht club commodore Barry Hiscutt has consistently dismissed claims that members have acted wrongly. He added that a planning appli­cation for the floating dinghy pon­toon was put forward in March and later granted.

Castle Point councillor Ray Howard called on local people to give the yacht club a break. He added: “This is a group of people that take their hobby very seriously. They are very conscious of protecting the environment and work closely to ensure they com­ply with any relevant laws. “I’m confident the club has done what is right and will continue to provide an excellent facility for local people.” Mr Howard said he would gladly organise a meeting between the club and other local groups to thrash out the problems.