Again it was one of Richard and Barbara Kovelant’s pictures of 1895 that kick-started a search, prompted by one of their questions. A photo of Benfleet’s St Mary’s architecturally famous wooden porch featured a gravestone in the foreground that not only related the name and date of the deceased, but also the address at which she died. The inscription reads: ‘Susannah Howard. Born at Benfleet 1 June 1820. Died 29 October 1871 at 17 East Lane, Bermondsey, London.’A rare treat for historians, but why would that be? Why would someone put such information on a gravestone? The tryst became a window into Benfleet’s history of bargemen and lightermen on the 19th century Thames. 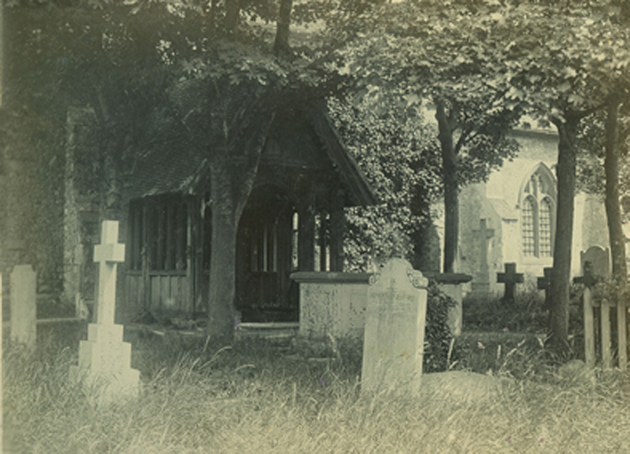 The Susannah Howard Stone in Benfleet Churchyard as pictured in 1895.

One help in looking into past lives is the ten-yearly Census. In 1841 a 26-year-old George Howard, a ‘Hoyman’, lived with his wife Susannah and a two-year-old son George at 36 South Street, South Benfleet. (South Street was the alleyway that runs from opposite the churchyard past the back of the Conservative Club.) As was common in those days, they also had a lodger, 75-year-old Diana Freeman. George senior’s place of birth is later given as Hullbridge/Hockley. 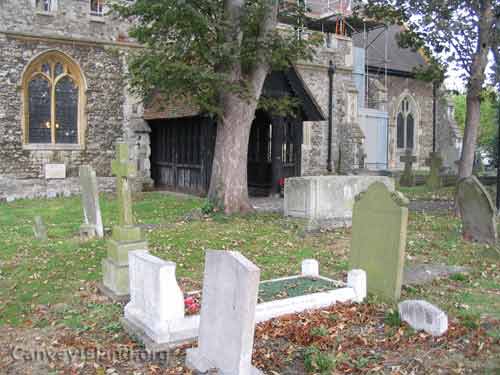 It’s puzzling, but no record has so far been found for the Howards in 1851. We find the couple again in the 1861 Census, when the 48-year-old ‘Barge Master’ George Howard and his 40-year-old wife Susannah lived at No. 36 Rainham Street, Southwark, London.
Ten years later they lived at the address given on the stone: 17 East Lane, Bermondsey, London. George is registered as ‘Lighterman’ and they are wealthy enough to have a servant, the 15 or 16-year-old Esther Mason. Susannah’s job description is ‘Lighterman’s wife’, so it is quite possible she accompanied her husband as mate or assistant on the waters of southeast Essex. The picture shows East Lane, Bermondsey in 1890. It ran from Neckinger Road to the River Thames at East Lane Stairs. (As the style of houses suggests, it was an ancient thoroughfare and many of its properties date from before 1750. This view looks south along the west side of the street.) East Lane still exists in a truncated form. A school lies across it today, cutting it short, though an 1885 map shows it running down to the river, to East Lane Stairs, a pick-up point for passengers by watermen, the floating equivalent of taxis.
The Benfleet stone gives Susannah Howard’s death as 29 October 1871. We cannot be certain, of course, but given her husband’s profession and modes of transport, it would be most likely that Susannah returned on a hoy to her final resting place within sight of the Creek at the village of her birth. Her London address would have been a status symbol and a message to impress fellow villagers? 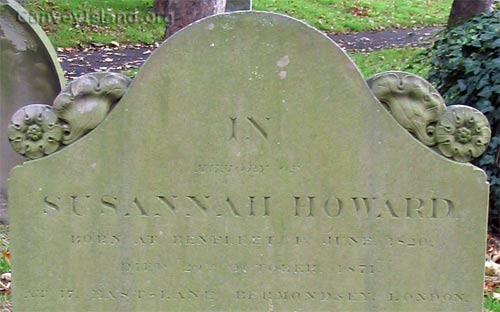 At the 1881 Census George Howard, ‘Barge Master’ age 68, had a new wife, 53-year-old Emma, who was born in Milton in Kent in 1828. They still lived at the Bermondsey address. Equally ten years on, it still is the home of the now ‘Retired Lighterman’ and his wife Emma.
By 1901 George had died and the 73-year-old widow Emma (the Census makes her younger at 69) lives as a ‘lodger’ in an almshouse in Penge called Waterman’s Asylum. It’s not as bad as it sounds. A retirement home designed by George Porter, it was built as 48 dwellings in 1840. A booklet dated 1899 describes the establishment as ‘Royal Asylum for Poor, Aged, Decayed and Maimed Freemen of the Company of Watermen and Lightermen of the River Thames and their Wives or Widows, Penge, Surrey. It was converted to private homes in 1973. 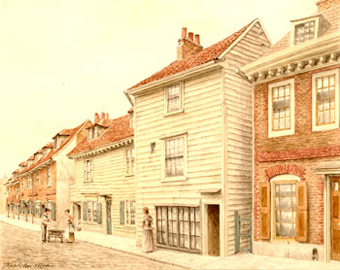 THE SECOND GENERATION
George and Susannah’s son George was missing from the Census of 1851 together with his parents. An answer might be that the family was out at sea, or even abroad on the night of the count. Ten years later, the couple are again on their own. We have, however found a George Howard who was born in Benfleet in 1939. Dates and associations fit and George Howard junior seems to have been a capable mariner. At 22 (in 1861) he was independent, a master mariner aboard a vessel called ‘The Flower of Kent’ with his ‘mate’ Robert Morely, aged 20, from Stanford le Hope. Very likely this was a Thames barge, possibly even a family barge.
By 1871 George Howard jun. was a Lighterman with a wife, 25-year-old Ann from Horsley Down in Suffolk, living at Wakering Street (or Road), Great Wakering. They’d probably lived with his parents at first, for their first son, five-year-old George, was born in Bermondsey. Three-year-old Susannah – no doubt named after her grandmother from South Benfleet – and one-year-old Henry M. were born at Great Wakering. There was also a fourteen-year-old Elizabeth Mansfield from Bermondsey, a servant and nursemaid.

THE THIRD GENERATION
Ten years later, when Susannah was 14 and Henry M. was 11, they lived at ‘Church Villa’, Wakering and had added another six children to the family, Annie (9), Charles (7), Emma (6), Arthur (4), Frank (2) and ten months old Ethel. Their father was a ‘Barge Owner’ now. George and Ann’s first-born is missing from the list, but at 15 he would have been old enough to earn a living and a George Howard can be found on a vessel called the ‘George & Susannah’ as a cook. The name of the vessel on which he served suggests the likelihood it belonged to his father or grandfather?
Alas, at the 1891 Census we find Ann Howard, a widow at 45, living in Wakering ‘New Town’, occupation: ‘Depending on sons for living’. With her were eleven-year-old Ethel and the last of her eleven children, seven-year-old Wilfred. Nine-year-old Margaret was not at home, but staying with her aunt and uncle Maynard in Rotherhythe. Of the sons on whom Ann depended, George, the eldest at 25, appears on the crew list of the Royal Navy as a Royal Marine aboard the vessel ‘Britannia’, moored in Dartmouth Harbour.
As seems likely, Maynard was Ann Howard’s maiden name. In 1851 a Maynard family, John, a Lighterman (with two barges) and Deputy Corn Meter* and Ann, his wife, 32 and 26 respectively and both born in Lambeth, lived at 3 George Place, Bermondsey. They had two daughters, three-year old Emma and five-year-old Ann, which would make Ann’s birth year 1846. 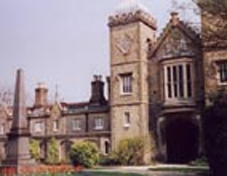 (*A ‘Corn Meter’ was a man who was responsible for weighing out corn in the market place. Sometimes Lightermen, if they were carrying corn as a cargo, were also responsible for its distribution at its destination.)
If the Maynards only had two daughters, it would seem like good forward planning of their daughter Ann and her husband George’s part to give the second son – who was likely destined to take over the Maynard family business – ‘Maynard’ as his middle name. We can’t find the Maynards in 1861, so the possibility of more children must exist. Henry ‘M.’ Howard was born 1870. Alas, every good tale has its twist. The 1871 survey shows the head of the Maynard household is John aged 52, but he has a new wife, Eleanor, and two – new? – sons recorded as Charles aged 17 and George aged 6. George still was a scholar, but Charles is listed as a ‘boat builder’s apprentice’.
In 1891, Ann Howard’s second eldest son, Henry ‘Maynard’ Howard is ’22’ and staying with his uncle John Maynard and his family in Rotherhithe, as was his sister Margaret. Henry M. is described as an ‘apprentice Lighterman’.
Two other sons of George and Ann Howard, Charles and Frank, both were aboard a vessel named ‘Pride’ with Charles as mate and Frank at only 12 years of age a third class hand in 1891. A lighterman, as different from a waterman, was licensed by the Port of London Authority to carry goods, wares or merchandise without passengers. Watermen have been likened to taxi drivers, while lightermen drove the juggernauts.
One might call it a Benfleet dynasty of hoymen, bargemen, watermen and lightermen, but barges were beginning to lose out to the railways. Of George and Susannah Howard’s eleven grandchildren in 1901, George, the eldest, was still in the Royal Navy aboard  ‘Hussar’, aged 36 and single like all his brothers. Henry Maynard Howard was ‘Lighterman & Waterman (Barge)’ and appears to be living with his sister Susannah and her husband in Gravesend. 28-year-old Charles was Captain of the barge ‘George & Ellen’, a Rochester sailing barge in Conyer Creek, Kent. Mate was Aubrey Wilson. Arthur was a dock labourer at Rotherhithe and Frank was mate on the ‘Zinita’ in Lowestoft harbour.
Annie Howard married George H. S. Murrell, a butcher in Prittlewell, Southend-on-Sea. In 1901 Ann Howard, now 55, was no longer living on money from her sons but had moved in with her daughter and husband at 46 Pleasant Road in the parish of St John, Prittlewell. Ethel Howard, born 1880, was a general domestic servant to a 64-year-old mercantile clerk, a widower, with a 16-year-old granddaughter. (Research thanks to Karen Bowman) 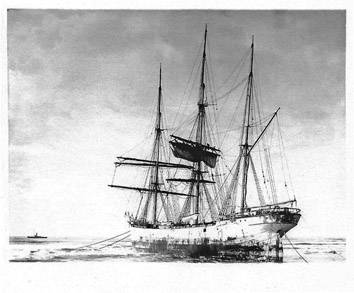 We have not found a picture of the barge Zinita, but the British barque ZINITA is pictured here stranded on Copalis Beach in 1896.

OF BARQUES OR BARGES?
There has been an interesting follow-up to the Howard saga. A Canadian who is transcribing his grandfather’s diary recording five years sailing the world’s oceans on a barque called the Zinita, got in touch, enquiring about the Zinita young Frank Howard served on in 1901. The Canadian ‘s grandfather’s diary recalls some interesting times before the mast (1905-1910).
A ‘Zinita’ made the news in 1905 when the 1525 ton barque collided with and sank the iron barque ‘Coimbatore’ 200 nautical miles off Cape Leeuwin, Western Australia on the 25th December that year. Her bowsprit and gear were carried away, but she reached port safely. Christmas Day would seem an auspicious date for such an accident out on the open ocean. There was just one survivor from the Norwegian ship, one man had fallen or jumped on to the Zinita’s deck at the moment of impact, all others were lost that night.
Alas, a Thames barge called ‘Zinita’ was built at Deptford in 1899 and registered in the Port of London. She was owned by Messrs. E. J. & W. Goldsmith, a firm of barge owners founded in 1848. They owned the Wharf at Grays, which in the early years of the 20th century was the home port for 140 vessels, the largest fleet of barges ever recorded. Our Frank Howard with his barge family background seems more likely to have sailed home waters than the open ocean, though crew lists of either vessel have yet to be found.
The barque Zinita was renamed Sorknes in 1910 and was broken up as a hulk in Dartmouth Harbour in the early 1950’s. The Canadian’s grandfather ended up captaining Union Castle Liners.