It had everything for a good thriller: 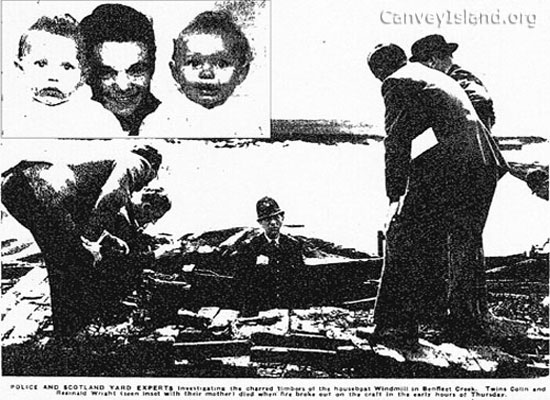 Police and Scotland yard experts investigating the charred timbers of the houseboat Windmill in Benfleet Creek. Twins Colin and Reginald Wright (seen inset with their mother) died when fire broke out on the craft in the early hours of Thursday.

Two women, including the boys’ mother, were accused and when the case came to court it made national news. On 24th May 1956 the Southend Standard reported: ‘MYSTERY OF TWINS’ DEATH IN BENFLEET HOUSEBOAT BLAZE. Handwriting test to track writer of poison pen letters?’ The scene of the crime was a houseboat called Windmill.

The Southend Standard was a weekly paper. A week earlier on Thursday the 17th May it had carried a similar story: ‘MYSTERIOUS FIRE BLAZES ON EMPTY HOUSEBOAT. Earlier, widow had asked to be locked on board.’ At that time the news was of a boat called Buchra, belonging to the twins’ mother.

According to the news report, soon after 3 a.m. on Tuesday, 15th May 1956, ‘the bridge-keeper at Canvey Bridge, Mr J. Thurgood, saw flames leaping from one of the craft in the East Creek. He found the converted landing craft Buchra, owned by Mrs. Violet (Vicci) Wright, ablaze and called Hadleigh and Canvey Fire Brigades.’ The boat was unoccupied, as Mrs. Wright, ‘mother of three years old twin boys’ was staying with Mrs. Grace Richardson on another boat, the Windmill, further down the creek. Mr. Wright had died four weeks earlier.
Vicci Wright had been repainting the Buchra, but there had been anonymous letters and she had at first asked Mrs. Richardson to lock her in her own boat for the night, the first time in four weeks, which would have been with an outside padlock.  Later she had changed her mind. That night the Buchra caught fire.

A week later the Southend Standard carried the news of the twins’ death:

‘Forty-eight hours after the Buchra was burned out in the early hours of Tuesday morning last week, another houseboat, the Windmill, further down the creek, was gutted by a second fire. On the Windmill Mrs. Wright was staying with her twins at the invitation of Mrs. Grace Richardson. Mrs. Wright, Mrs. Richardson, and her three children escaped: Mrs. Wright’s twins, three-years-old Colin and Reggie, were killed.’ 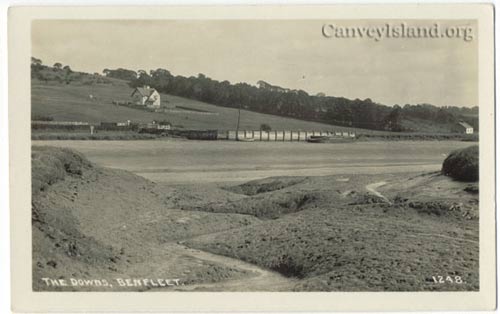 This second fire had been reported by the keeper of Benfleet Downs, Mr. E.J. Tylor in the early hours of Thursday morning, when he called the fire brigade. Another witness, Mr. Cecil White, passing in a staff train, reported a heap of rags he had seen burning on the deck.

Mrs. Wright was taken to Southend General Hospital and treated for burns. Mrs. Richardson with daughter Ann (17), son Douglas (16) and daughter Beryl (2 – the Times made her 11 years old) lost everything in the fire and moved at first to Westcliff, where they ‘were provided with clothes by the W.V.S. and Red Cross’.


Following a post-mortem, the twins were buried in Benfleet churchyard on Thursday morning by the Vicar, Rev. Leslie Rooney, ‘who baptised the babies’. On Friday a Scotland Yard scientist, Dr Ian Holden, examined the boats. He took away wrecked oil stoves and charred wood from the Windmill, ‘a house built upon the non-floating hull of a barge’. 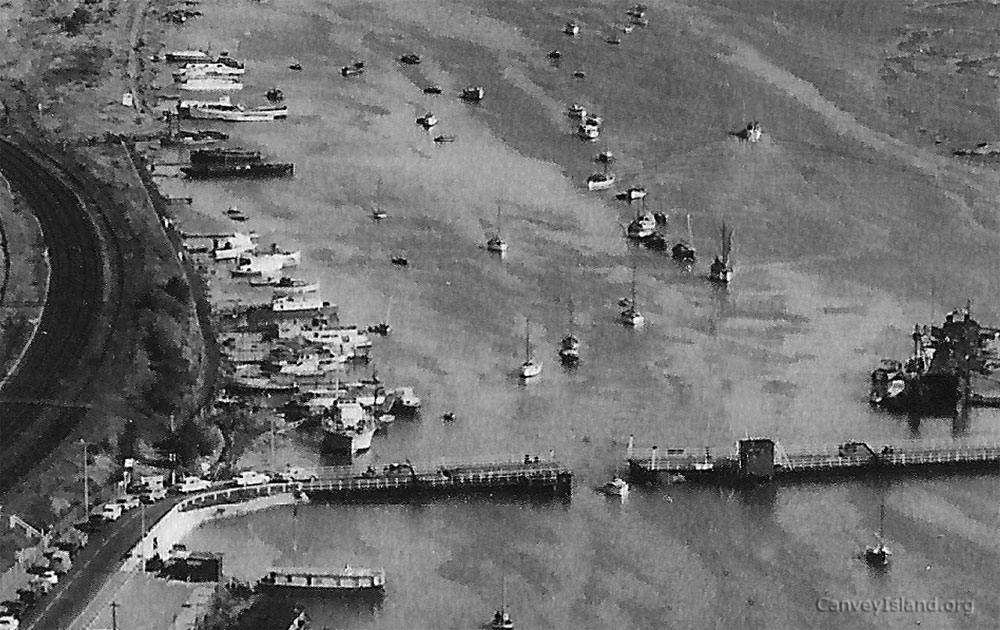 Rumours were rife: Was Mr. Reginald Wright’s body going to be exhumed, as he had died suddenly beside the creek five weeks earlier? Would a handwriting expert be brought in to try and trace the writer of a number of poison pen letters to Mrs. Vicci Wright? A middle-aged mystery woman in black had been seen ‘after lunch on Tuesday’, going down the path beside the creek towards the Buchra. ‘When she had gone about 200 yards down the path’ the grass verge beside the houseboats burst into flames. With that she’d ran back to the road and disappeared. A local businessman was involved, who had something to do with Taxis and always wore a flat cap. 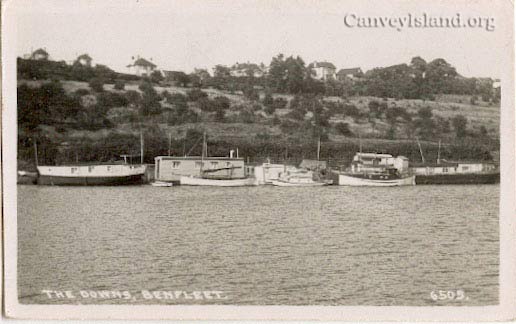 Houseboats on the east side of Colvin Bridge

The Police were non-plussed and asked for cooperation from the public. When a Mr William Smith of Northwick Corner, Canvey, ‘a friend of Mrs. Wright’, left the South Benfleet Police Station after being interviewed, a photographer ‘tried to take a picture, and Mr. Smith damaged the man’s camera’. (According to later eye witness information, Mr Smith and Vicci Wright were in fact lovers. Mrs Wright has been described as ‘a very friendly lady…’) Father of the twins was Steve Taylor, though like Mr. Richards he does not seem to have figured in the investigations. When the case came to the Central Criminal Court in London, the Times takes up the story (with some minor alterations – ages of the twins becomes two years and Vicci changes to Vicky).

On 1 November 1956 the Times reported that Mrs. Violet Lavinia Clark, also known as Mrs. Wright, aged 35, housewife, of Thames House, Northwick Corner, Canvey Island, Essex and Mrs. Grace Richardson, aged 47, housewife, of Suttons Hostel, Suttons House, Hornchurch, both pleaded ‘not guilty’ to the murder of the twins Colin Malcolm Clark and Reginald Melvin Clark.
Mrs Richardson’s daughter Ann (18) spent 6 hours in the witness box denying that she or her family ever agreed to set fire to their boat. She stated that Vicky (Mrs. Clark) had ‘kept on and on’ at them to burn the Windmill, saying: “If you set fire to your boat… Bill (Smith) will have to find a place for me until we go to Australia.” She also insisted that her mother had worshipped the twins. Ann Richardson was followed in the witness box by her brother Charles Richardson (16).

On Friday, 2 November, the Times reported that witness Mrs. Winifred Gertrude Bowling, a neighbour from houseboat MTB 492, had stated that shortly before the fateful night of 17 May, when the twins died, a man named ‘Bill’ Smith had suggested that they could ‘easily be sold for £100 apiece to the Americans’. After the fire Mrs. Bowling’s husband had brought the Richardson family to their own boat and she had attended to a slight burn on Mrs. Richardson’s left arm. On the subject of adopting the twins, Mrs. Bowling said: “She (Mrs. Richardson) and her husband were prepared to adopt them, but Mr. Smith and Mrs. Clark would not have it done legally, but only on a scrap of paper and Mr. Richardson would not agree to that.”

In evidence the senior scientific officer at the Metropolitan Police laboratory stated he ‘could find no indication of any natural origin of the fire’. On the 13th November 1956 Mrs. Richardson was acquitted both of murder and manslaughter. The case continued against Mrs. Clark. In 1949 she had gone to live with a Mr. Reginald Wright and she had changed her name to Wright. Mr. Wright had died last April. When asked by her counsel she insisted she ‘took the twins out regularly and taught them to sing, to recite and play the harmonica’.

View of Canvey from Benfleet Downs with the Colvin Bridge & Houseboats

She had known a man named ‘Bill’ Smith for ten years, but had never been intimate with him. She denied there was any intention of going to Australia with Smith, or that he had said he was unwilling to take the twins when they went. Where did she go to live after the fire? Following hospital treatment she went to her sister and then she asked Mr. Smith if he had rooms, hence her Canvey Island address. The judge asked: “Was his wife there?” She answered: “Not then.”
Mrs. Clark was found not guilty of murder but guilty of manslaughter and sentenced to three years for each of the twins, the sentences to run concurrently. She was also found not guilty of the charge of arson on a lack of evidence. There was an application for leave to appeal against the sentences, but if that was followed through or what the outcome was we do not know, nor the outcome of subsequent allegations by Mrs. Grace Richardson ‘against certain people’. 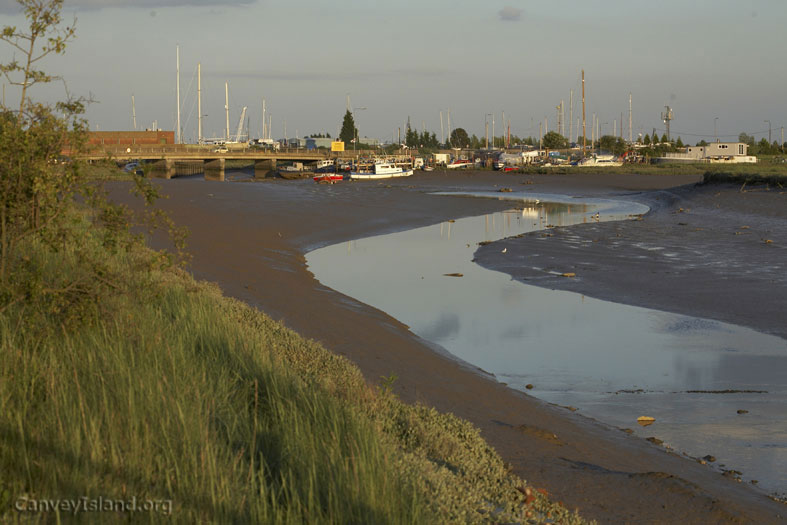 The Creek Today – Looking east towards the new bridge

It has been suggested that Vicky Clark actually ventured to Australia, but was turned back at the point of entry, which, as Australian law stood, would have been refused to anyone with a criminal record.

Locally the twin boys were remembered as lovely looking children, about 12 to 15 months old, with lovely dark curly hair and big dark brown eyes. Paraffin was sold at Jack Morling’s shop, Attwells (Ironmongers) in Benfleet High Street, but at the time in question a young girl babysitter had made the purchase, not Vicky.

An interesting aspect of the case was the fact that Vicky Wright was represented by one of the greatest female lawyers of the age, Dame Rose Heilbron, who secured the decision of manslaughter, rather than murder. It has been reported that Heilbron succeeded by persuading the jury that ‘Wright would not have put her hair in curlers knowing that she would meet the fire brigade’.


There have been recent developments, when a former Council employee found a newspaper cutting from the time he helped to exhume Reginald Wright in Benfleet churchyard and I’ve passed our research over to Tom King. It was published in the Evening Echo 10th July 2008.

I’ve also been contacted from New Zealand by Elyse Featherstone, a great-granddaughter of William (Bill) Smith, as she was researching into the shenanigans of her ancestor. On finishing our research I sent the story to her, though to date there has been no reply. She did, however, earlier give some information on her great-grandfather who had ‘known’ Vicky for three years before the fire:

‘William Smith did not emigrate to Australia, but his son did who was my uncle… The last known traces of him were found in Jaywick, in Clacton on Sea, he had a house keeper who was said to have taken lots of money from him, so I suppose he got his karma. Its said he died around 1974/75 making him 76…’

So he did not emigrate as Tom King states, but she, too, suggests that someone alerted the authorities in Australia, where Vicky Wright was refused entry.  Robert

If you can add any memories, photos or information including the exact position of the Houseboats please leave a comment below, email in, or join us on the Canvey.org forum where this story has been discussed.