Boat building and repairing by the Creek

Perhaps it is because it began in 1940 wartime that so little is known about Underwoods Shipyard on the creek between Benfleet Station and Canvey Bridge? It lasted for little more than twelve years. 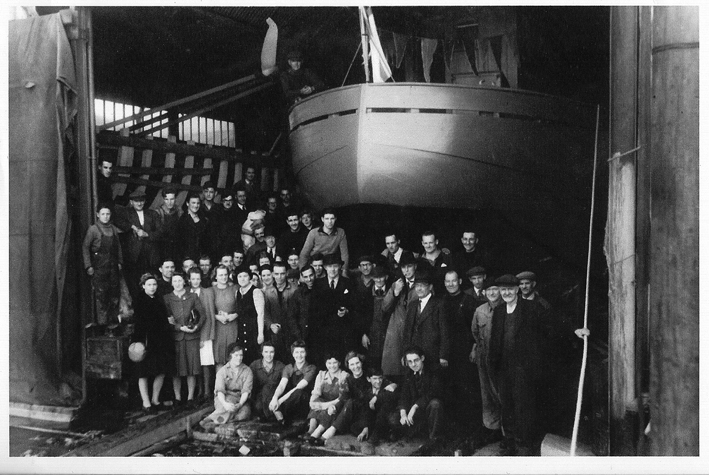 The main picture was taken c.1940-45 (probably at a launching party), and commemorates a workforce of some 57 men, boys and women. (In the background one worker is holding a baby, though its participation seems unlikely, even in wartime?) Mrs Hilda Underwood is the first lady from left with the circular handbag. Standing next to her is Mrs. Cushing. Squatting in the foreground first from left is Miss Wightman. Prominent standing second from right (with rope) is Mr. Thorogood. Fourth from right Mr. Leslie Watts, Patricia Pedder’s father, one of ten siblings. Who else do you know?

Talk is that they repaired Motor Torpedo Boats. Others remember it as ‘building Motor Fishing Vessels (MFVs)’. Of course, both are possible, if the latter followed the former in peacetime. Oddly enough, Dauntless Shipyard on the eastern Canvey side of the bridge was evacuated and the skilled workers moved to Wales for the duration of the war, which on the face of it seems a contradiction. 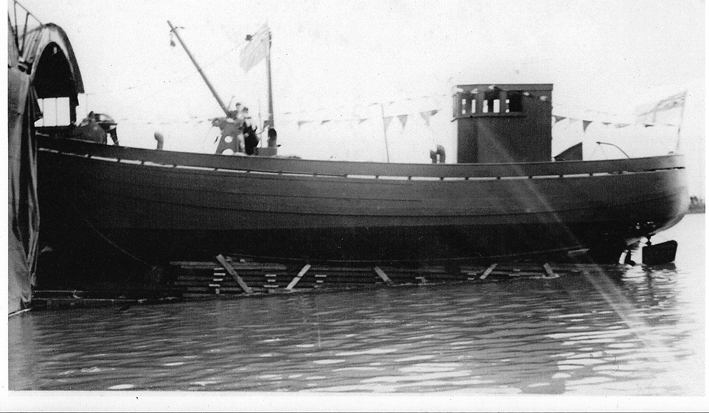 A boat still on wooden supports in water, though with bunting flying, the bow under an arch that must be part of the dock building with a corrugated roof?

Foreman Cecil Watts (right) with an as yet unidentified worker at Benfleet Slipway. Cecil Watts – Patricia Pedder’s uncle – worked there until it closed about 1952. Canvey houseboats in the background.

Wartime secrecy must be the reason for so little information being available. The Slipway did however attract enemy attention when it was attacked by aircraft. So maybe it was the yard that was the target in February 1943 when Benfleet railway station was attacked and Mr Toovey was injured in Knightleys’ station news kiosk?

It’s difficult to reconcile the works in today’s situation, when with the widening of Ferry Road only the bus stop survives. It is also the former site of the Tea Rooms that have been remembered and mentioned in previous communications.

Many of these memorable pictures were kindly supplied by Patricia Pedder whose father and uncle both worked at the ‘Slipway’ ‘during the war and until about 1952-3 before the new road was made’. Patricia’s father was Leslie Watts and his brother Cecil Watts was Foreman.

‘The Yard was situated in Ferry Road near the site where you would now catch a bus at Benfleet Station to Hadleigh. The men who worked there built motor torpedo boats for the Second World War, among many other types of landing craft, from 7 am to 7 pm with half an hour for lunch break.’ 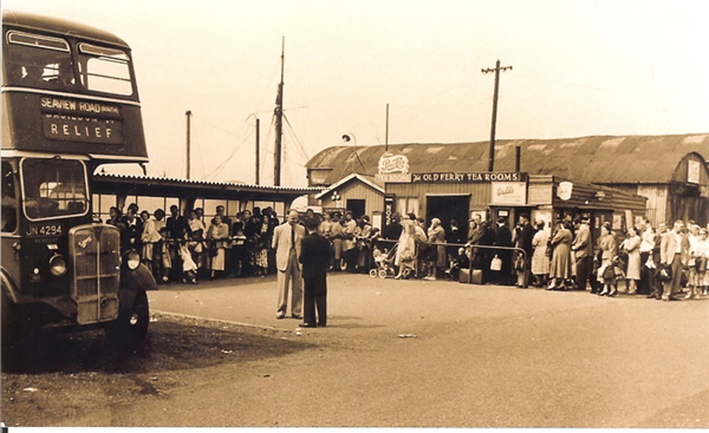 The Relief bus to Seaview Road with a large and patient queue of would-be customers, while the driver talks to a gentleman, possibly a one-armed gentleman, in a light suit. Was there a problem? A strike, perhaps? Does anyone remember? ‘The Old Ferry Tea Rooms’ are well remembered by those who caught their buses there, but the arched corrugated buildings in the background, somewhat the worse for wear, can only be Underwoods Shipyard. 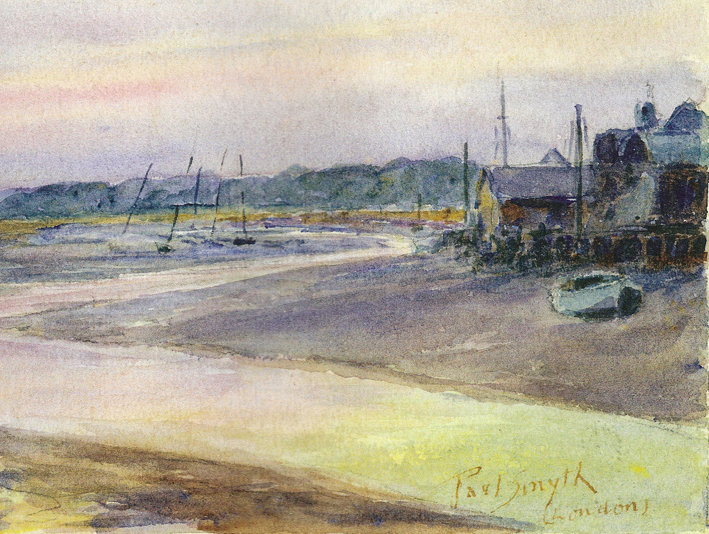 The yard has also been included in one of Paul Smyth’s paintings (featured elsewhere on this website). In ‘After Sunset – Benfleet Creek’ (1951) the double arches of the corrugated roofs are clearly visible in this detail, seen from Canvey bridge. 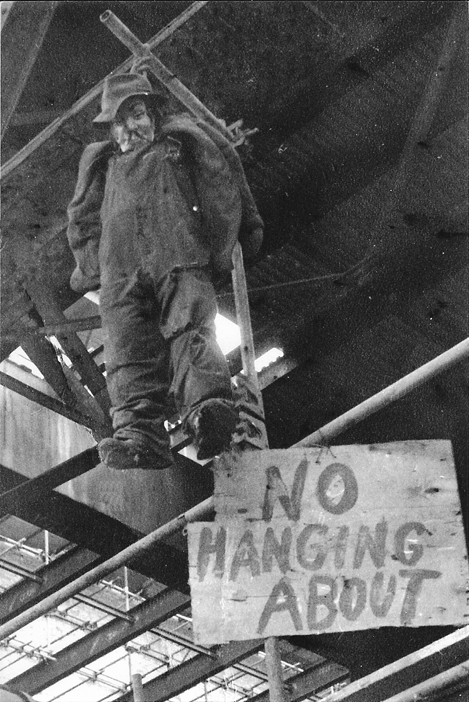 A scarecrow-like figure was suspended under the roof of the building with the message ‘NO HANGING ABOUT’, which very much looks like a wartime incentive effort to employees.

‘North sea boats were repaired in the war, overhauls done and on one occasion 70 planes passed overhead and machine-gunned the yard. Everyone took cover under the boats being repaired.’

‘It was a grand event when a boat was launched and all members of the company were present.’

‘To get to Ferry Road all traffic had to go via the level crossing and many times wait until the trains passed through the Station. Buses started at Ferry Road to and from Canvey, where crews were found having a cup of tea in the Ferry Tearooms until their bus was due to go out again.’

‘My father Mr Leslie Watts was among the men who worked at Benfleet Slipway throughout the time it existed. He lived at the bottom of Essex Way, coming home for dinner on his bike.’

If you can add any memories or information about the Boat Yards and people of this area please leave a comment below or email us at the website. You can also join us on the Canvey.org Forum (see right)