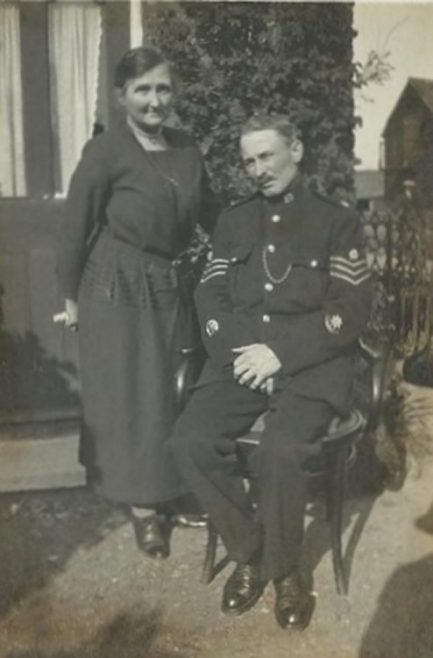 Charlotte and Edward taken after they left Canvey

Edward Horace Colyer Filmer was born on the 2nd October 1869 at Cliffe-at-Hoo, Kent to Mathew and Frances. When he turned 19 he became a Postman until 1891.

On the 20th May 1891 just 4 days after leaving his Postman Job he joined the Essex County Constabulary Police.

Perhaps moving to Essex was the reason for the change of job. After the death of his father the family had moved to Chadwell St Mary in Essex. At first he was with the PO in Tilbury. Once he was in the Police he trained to drive Ambulances, the date of his certificate is 1894.

It was here in 1895 that he met and married his wife Charlotte Elizabeth Cooper, who coincidently was born on Canvey in 1872.

During his time with the force he was stationed at Rayleigh, Paglesham, Witham, Takeley, Canvey Island and Tolleshunt Darchy. 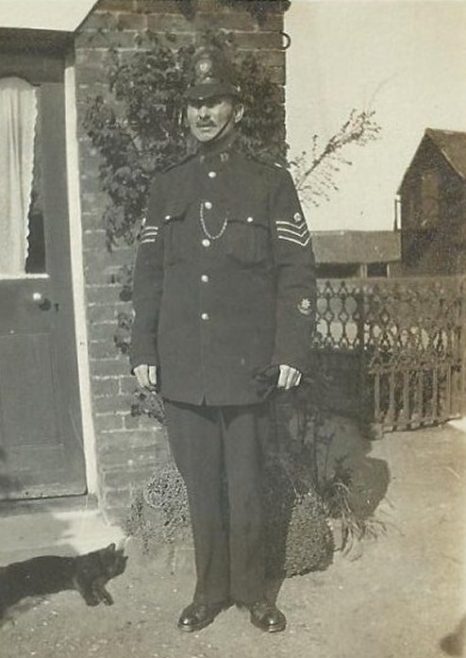 His time as Canvey Island Police Constable was from 1902 until 1911. He had been sent here to fill a vacancy. According to his medical history he suffered ‘Inflammation of face’ in his first December on the Island. We do get some very cold winds here.

His two youngest children Leonard and Irene were born during this time.

So far we have not found his name on many documents. He is listed in Kelly’s as Canvey’s Police Constable in 1902 and in the 1911 census where it was stated that the family Edward, Charlotte and their four children lived in the Village.

Plus I found this little snippet in the Essex Newsman dated 1905:- 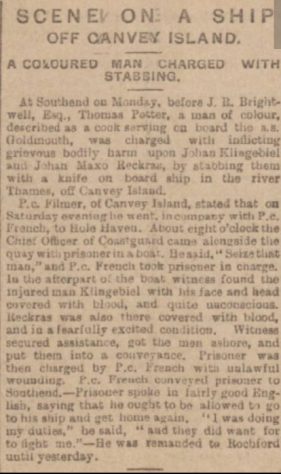 At Southend on Monday, before J R Brightwell, Esq., Thomas Potter, a man of colour, described as a cook serving on board the S S Goldmouth, was charged with inflicting grievous bodily harm upon Johan Klingebiel with a knife on board a ship in the river Thames, off Canvey Island.

PC Filmer, of Canvey Island, stated that on Saturday evening he went, in company with PC French, to Hole Haven. About eight o’clock the Chief Officer of the Coastguard came along the quay with prisoner in a boat. He said, “Seize that man,” and PC French took prisoner in charge. In the afterpart of the boat witness found the injured man Klingebiel with his face and head covered in blood, and quite unconscious. Reckras was also there covered with blood and in a fearfully excited condition. Witness secured assistance, got the man ashore, and put them into a conveyance. Prisoner was then charged by PC French with unlawful wounding. PC French conveyed prisoner to Southend. –  Prisoner spoke in fairly good English, saying that he ought to be allowed to go to his ship and get home again. “I was doing my duties.” He said, “and they did want for to fight me.” – He was remanded to Rochford until yesterday.

After Edward left Canvey he was made a Sergeant. He stayed in the Police Force until 1923. Edward’s records show he was only 5-9″ and 35 1/2″ chest but had 2 commendations and was awarded £2 and a merit badge by the Chief Constable for tact shown of horse stealing, and another £2 for merit conduct for an outbreak of fire in Tolleshunt D,Arcey. He had no misconduct reports.