You are here: HomenextHistorynextOld WillsnextWill of John Wakelin of Canvey Island

Will of John Wakelin of Canvey Island 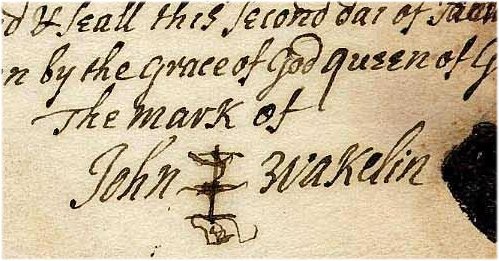 In the name of God amen. I John Wakelin of Canvey Island in the parish of North Bemfleet in the County of Essex, yeoman, being sick and weak, and of sound and perfect mind and memory (Thanks be to God therefore do make and ordain this my last will and testament in manner and form following; hereby revoking and annulling all former wills and testaments by me made. (That is to sai) First I recommend my soul into the hands of God almighty who gave it, and my body to the Earth from whence it was taken, to be there decently buried at such costs and charges, and in such place as my Executor hereafter named shall think fit; And as touching my worldly estate with which it hath pleased God to bless me; I do dispose of the same as followeth; (vis) Im pris I give and bequeath unto my dear wife Johanna all that farm called Oystersfleet in the parish of North Bemfleet to enjoy during her natural life, and after her decease to my daughter Johanna Bell if she survived her and to her heirs lawfully begotten of her body forever, but in case the said Johanna my daughter should die without having a child, then I give the said farm called Oystersfleet after the decease of my wife Johanna to my cosin Thomas Wakelin of Foulness and his heirs forever; He the said Thomas Wakelin paying unto my son in law Giless Bell two hundred pounds and unto each of my brothers and sisters children ten pounds of lawfull money of Great Britain, a year after the decease of my wife, Item I give to all my brothers and sisters children the sum of five pounds to be paid to them after my decease and equally divided among them; Item, I give and bequeath unto my sister Eleonor Smith of Shafford in the County of Essex, the sum of twenty pounds a year to continue for five years, provided she lives so long, all these legacies to be p?id by my Executor hereafter named. Item all the residue of any ready money, Goods, Chattels and personal estate whatsoever not hereby disposed of, I give and bequeath unto my loving wife Johanna Wakelin and to my son in law Giless Bell to be equally divided after my decease and

that part that shall acrue ? to my wife Johanna to come to my daughter Johanna Bell after the decease of my said wife, and in case my said wife Johanna Wakelin shall build a house upon my said farm of Oystersfleet (which is needful) my will is that Giless Bell shall be at half of the charge, and I do hereby nominate , appoint and constitute my said wife Johanna Wakelin sole executrix of this my last will and testament. In witness whereof, I have hereunto set my hand and seal this second day of February in the twelfth year of the Asign??/Reign?? of our Souereigne Lady Ann by the grace of God Queen of Great Britain Anno Dom 1712/1713

The mark   of John Wakelin