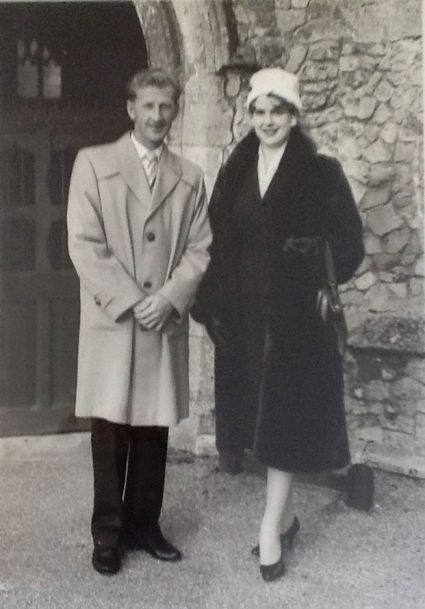 Mum and Dad such a glamorous couple her in her beaver lamb coat she paid for weekly to a Jewish fur dealer in the east end of London. She was taken home to her new boyfriend’s house to meet the parents and who should be the Father but the Fur coat dealer. So embarrassed was she that the romance was over (lucky Dad) but she paid the coat off.

We have received a large quantity of photos and memorabilia from Jane Parkin regarding her Manly and Saul family.

Jane’s great grandfather moved to Canvey before 1911, he was William Manly and he was a postman. He died in 1938 and although he did not live on the Island at that time he was buried here at St Katherine’s in the grave where his wife, Jane was buried in 1922.

His son, Edward was a builder and built many Canvey bungalows and a large Edwardian design villa still standing today in Westman Road. We will gradually be putting them on the site.

The photo on the right is of Jane’s parents John and June Manly nee Saul (Frank Saul’s sister).

The photo below is of Jane’s father John and his sister Fay when they were both in their teens. John was born in 1928.

zoom
Fay and John Manly, John looks about 15 and Fay was three years older so this would be about 1943
Jane Parkin