You are here: HomenextHistorynextSt Katherine's ChurchyardnextCaptain Cook and the Canvey Connection

Captain Cook and the Canvey Connection 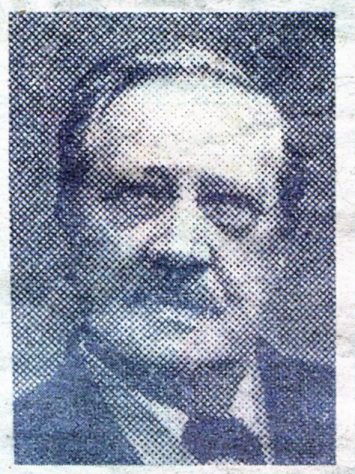 There was an article recently in the Echo about Canvey and a very tenuous link to Captain Cook so I decided to investigate.

Their article mentioned a report in the Southend Standard newspaper from 1938 about an islander, John Kealey who had died and that he was the oldest living descendant of Captain Cook.

The article in the Southend Standard apparently said: ‘The death occurred on Sunday of Mr John Kealey who up to the time of his demise was the oldest surviving descendent of the navigator Captain Cook.’ I have found the same article in the Essex Chronicle as can been seen to the below. 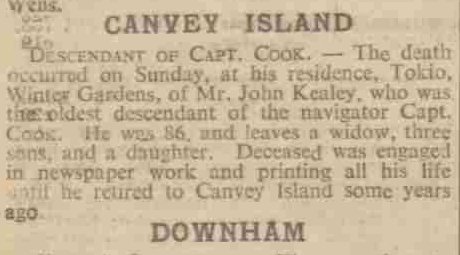 It is highly likely that John went to his grave still believing he was descended from Cook but alas he was not as the Echo goes on to explain. Captain Cook did not have any descendents, of his six children none ever married or had children and the Echo goes on to say it is likely John is descended from Cooks sister Margaret. From what I have been able to find this sounds more likely but cannot verify unless I paid out to buy certificates etc.

It was also reported in the Echo that his home was full of Cook memorabilia and that Captain Cook’s wife, Elizabeth was in the habit of presenting each child born into the family with a cup and she gave one  to John Kealey’s mother on the occasion of his christening. Unfortunately this is definitely untrue as Elizabeth died some 18 years before his birth but perhaps it was one given to his father for his Christening.

John was born in 1853 in South Shields. He married his wife Jane Ann in 1881 and they had 5 children. The youngest, Edgar James was a poster designer and illustrator active from c. 1914 until the 1930’s, he was born in Middlesbrough. According to the census records John was recorded as being either an advertising agent, managing a newspaper or as in the 1911 census ‘Advertising Manager’ for a newspaper. The Echo said he worked for the North Eastern Daily Gazette and was very active trying to get the obelisk dedicated to Cook restored. John accompanied by his wife was at the re-opening ceremony.

In the Echo’s article they mention John’s home on Canvey which I can confirm was in Winter Gardens called ‘Tokio’ and was in Tabora Avenue. How long he lived there is unknown but only his daughter is registered in the 1929 Electoral Register possibly because of his age. Neither John nor Ethel were in the 1918 Register and the family were in Camberwell for the 1911 census.

I can also confirm that John Kealey died in 1938 and was buried in St Katherine’s Churchyard on the 3rd February in an unmarked grave to the West of the old church.