A Child's Sounds of War

Written and Illustrated by Terry Buchanan

Young Terry Buchanan kept his ear to the ground during the momentous events on the Home Front. 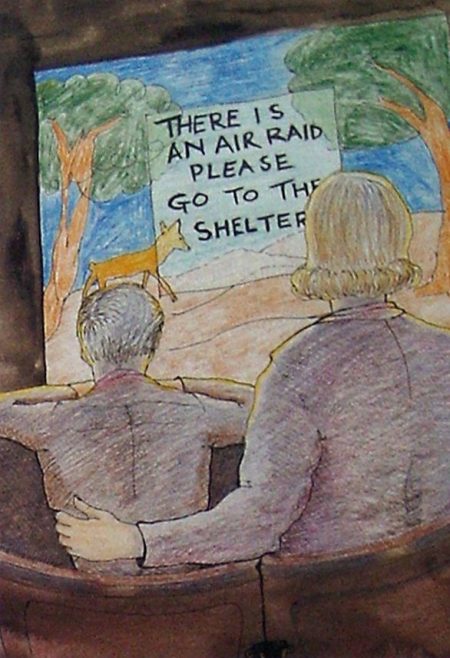 During a showing of Bambi, at a crucial moment of suspense, a hand-scrawled notice popped up onto the screen telling the audience to go to the shelter because an air raid was in progress. It was a false alarm – one of many during the war years.

I was little more than a toddler at the start of WWII and we lived at Plaistow in East London. Our house was bombed during one of the first air raids and after a brief period in Berkshire, we evacuated to Canvey Island, in Essex. We already had family and friends there and because my father was in a reserved occupation repairing damaged and convoy ships, Canvey was more convenient for the train journey to Tilbury or the London Docks.

My father kept a rifle in his wardrobe, part of his obligatory Home Guard issue. I could not lift it but was fascinated by the clicking sounds I could make with it every time I secretly gained access to that mothball-scented wardrobe.

His importance as a soldier was well demonstrated one early morning when a fellow Home Guard soldier almost kicked our front door down in his frantic effort to raise my father. Gasping for breath and shouting, his voice reached a high-pitched crescendo: “Harry, it’s the invasion.” It wasn’t, of course, but living at the mouth of the river Thames, any unusual sighting was considered suspicious.

Canvey Island was not the best choice for evacuation, being directly under the flight path of German bombers en route to bomb London. At such times, my mother used to put me into a shelter made from thick steel and close down an iron grill with a clanking noise, rapidly diminished by the deafening sound of the air raid warning. Soon afterwards, I would listen for the monotonous drone of approaching bombers, the pom-pom sounds of artillery batteries sending their shells skywards, a long pause, and the distant thud of bombs meeting earth.

My mother would reassure me, saying that it was only angry polar bears outside my little iron igloo and I should settle down and go to sleep, but I never did. I just waited, because I was listening for the different sounds. Sounds of those bombers on their return flight and this time accompanied by a new, almost enjoyable sound to young ears – the rat-a-tat-tat of fighter machine gun fire.

Canvey Island was very much like a village community, a rural seaside. Even at the age of five, I could freely take part in unsupervised childhood adventures with my friends, none of them much older than me. Although it was wartime, the fields were not surrounded with barbed wire as they are today; even the beach was accessible.

Pretending to swim in warm tidal water was a brief pleasurable experience in those hot wartime summers. The main junction of this village island, reclaimed from the sea by Dutch engineers, was at The Haystack public house. Facing it was a large painted notice board proclaiming that one day the island would have its own hospital on the land that had been reserved for it. Turning right at this junction would eventually lead to the ‘sea’ front and the Monico Hotel, an art deco-style building that later became the honey pot for locally-based American servicemen and the attraction for many of the local young women.

These young Americans in uniform often sat outside The Haystack and I would be encouraged to ask them: ‘Got any gum, chum?’ They always obliged in an accent that sounded foreign to me. The more tasteful pleasure I was introduced to was the Ice cream concoction, Knickerbocker Glory – a long spoon squeaking  against a tall glass, scraping up the last tiny morsel of cold sweetness. 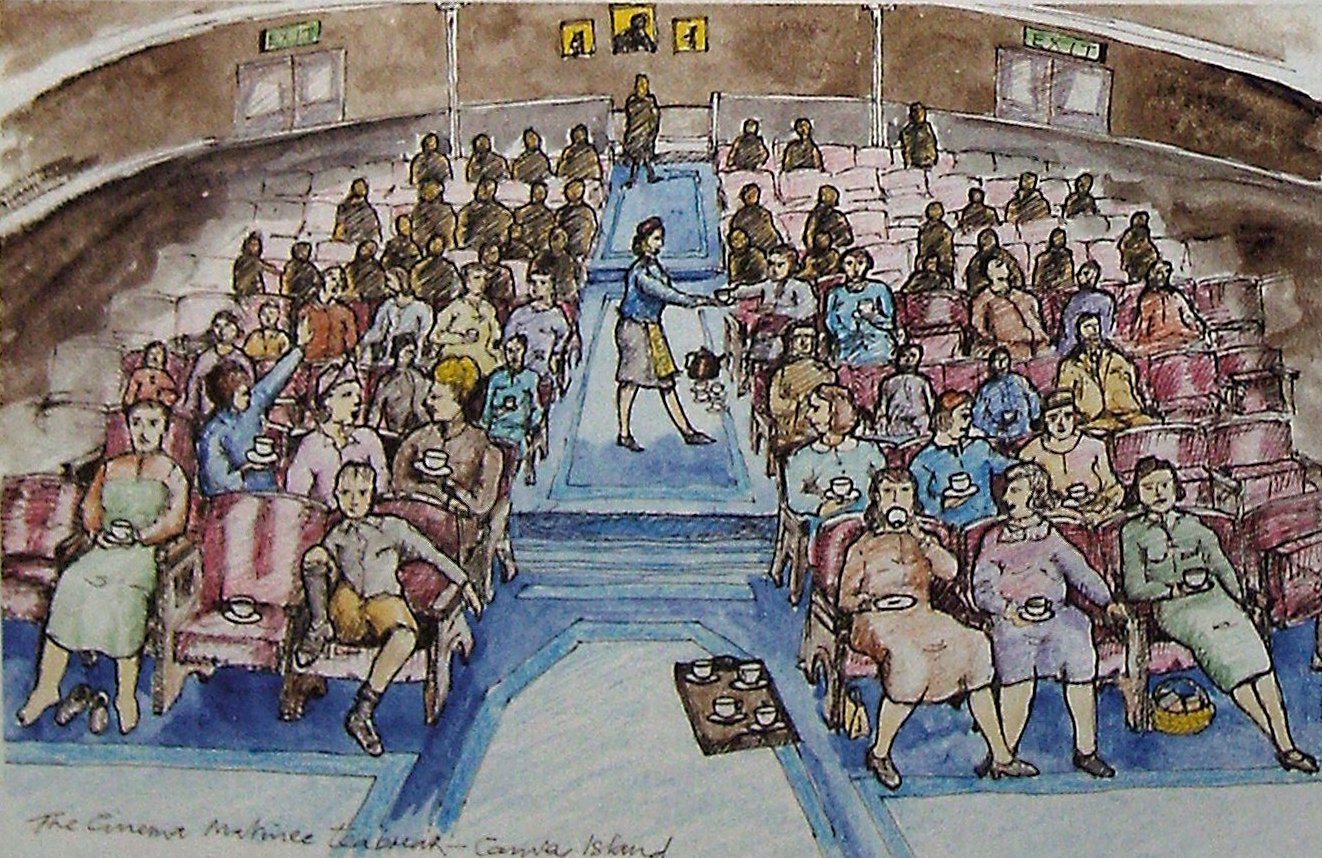 During the intermission at the Canvey Island cinema, china cups and saucers were brought in and tinkling sounds filled the auditorium as milky tea was poured from a large brown metal teapot.

Just along from the Haystack was the cinema, and it was here that most of war news was exchanged. It was in this cinema that I first heard that the war had finished. The Chinese whisper became a shout: ‘It’s over, it’s over’. A jubilant audience flooded out onto the high street to join ecstatic promenade, whilst the celluloid Hollywood lovers were still locked in their black and white embrace, completely detached by the flickering light of the projector bulb from momentous point in history.

I cannot remember if it was my fifth birthday or my first day at infants’ school. I was excited and left the bungalow hand-in-hand with my mother. The sight that greeted me was wonderful: from every rainwater gutter, rooftop and telegraph wire hung thousands of strips of silver foil. They moved with the breeze and glistened brilliantly in the early morning sun. I looked up at my mother excitedly, but she just looked straight ahead with a sense of fear showing on her youthful face. I learned much later, that these strips of foil had been dropped by enemy bombers to confuse the radar during their night time attack.

There were other times when my mother’s sense of fear came through to me. Once, we were walking together when we heard a loud noise directly above us, like sheets being shaken in the wind. We looked up to see white parachutes opening. Mother gripped my hand tightly and we rushed home to seek its security. Meanwhile, older and maturely wiser women were putting on kettles, preparing tea in case the crew of this RAF plane landed in their back garden.

As the war rolled on, such incidents became more frequent. I was in our back garden when I heard a violent flapping sound and over the top of our bungalow came a huge American bomber, almost scraping the chimneypot. It was orange and black and large parts of its shredded fuselage flapped the air stream against other parts of the bodywork. It was being glided, without engine power, by the American pilot to avoid areas of housing and was heading towards the sea. He was too low to bail out but such acts of sacrifice are testament to the qualities of men in war, mostly going unrecorded.

As a schoolboy with newly found friends, Canvey became countryside to be explored. This island, with a protective sea wall, was unlike any other English landscape. At the top of our road was a small wooded copse inhabited by lizards and newts that formed an important part of our boyhood games. We played soldiers or cowboys and wrestled on haystacks or wandered the flat, open sky, skylark-singing marshes, where an oil refinery now stands. The initiation to our branch of the Cadbury Club was a ‘booter’ getting both socks and plimsolls soaked in the marshland rivulets, then walking home with squeaks and squelches amongst the sound of mischievous boyhood laughter. 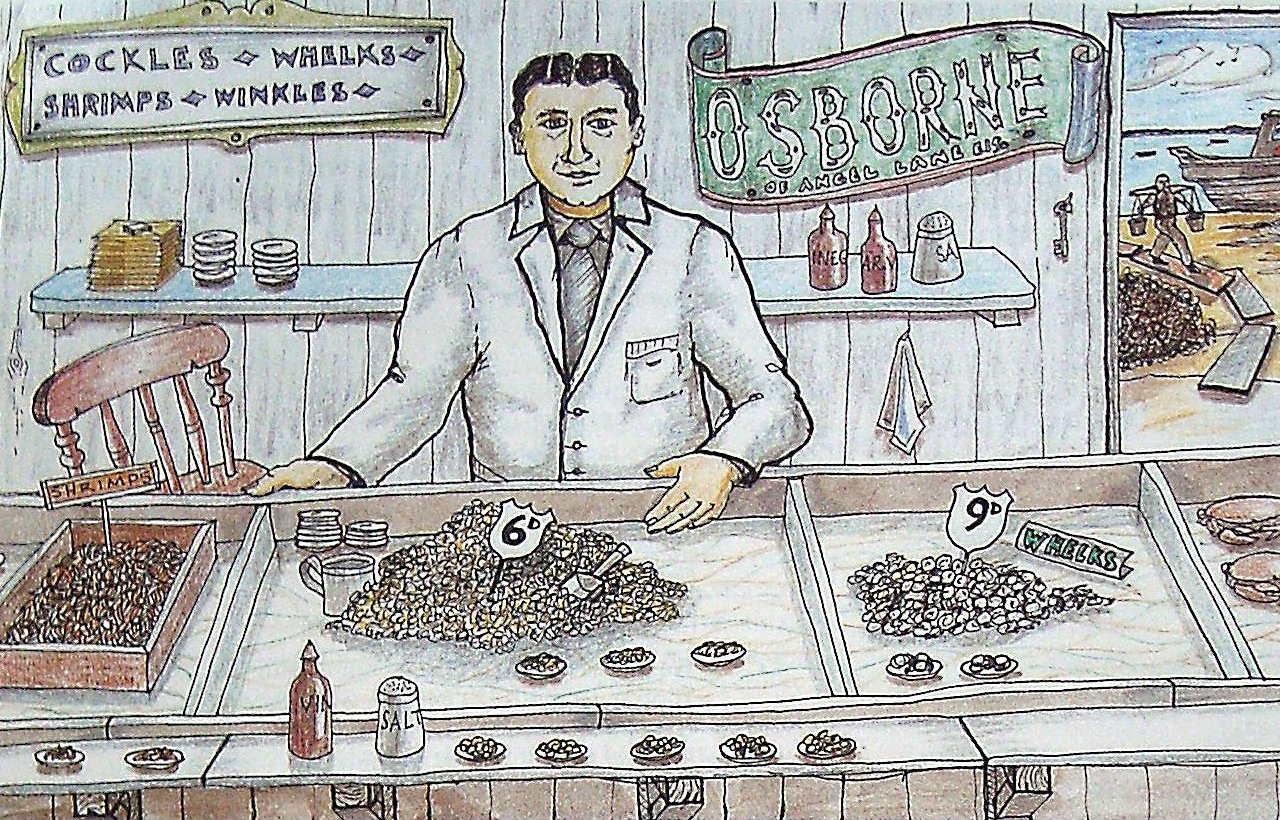 Terry’s mother used to take him to the cinema in Southend via a brief stop at the cockle sheds in Leigh-on Sea. At a few pennies a plate for cockles, it was one of those cockney baptisms.

The war continued with its everyday experiences. One morning, I came out of the front door and the ground and house shook violently in the shockwave of a terrifying explosion. I looked out of the porch towards a huge column of jet-black smoke rising rapidly into the sky.   I shouted and screamed with fear as I banged my tiny fists against the door with frenzy in the attempt to seek the safety of my mother’s arms. It had been a doodlebug.

I saw others, much closer after that, large orange-coloured rockets belching a loud, gutteral roar from the net of flame-that propelled it. Whilst it made this sound, you knew that it was passing.  When it suddenly went silent, you dropped to the ground and waited.

At times, our fighter pilots tried to tip the wings of a doodlebug with their own aircraft wings in an attempt to deflect its course – sometimes with terrible consequences. I overheard: “She was cooking at the time when the doodlebug came down. The saucepan handle went through her neck.” To my child mind the image of this was distorted, nightmare-like.

Restricted rations and lack of nutritious food left some of us in poor health but almost as a form of compensation there was a list of procedures that could be done even when there was no medical need. The removal of appendix or tonsils, or ear, nose and throat operations, were a matter of course. I  remember my mum and matron standing at the foot of my hospital bed, matron asking: “Whilst we have him in here, would you like us to remove his appendix?”

My own ‘ear, nose and throat’ was done  at  a hospital on the mainland. As I came round from the anaesthetic there was an almighty explosion. The French windows at the side of my bed blew open with tremendous force and the curtain rose horizontally like flags shredded  by the shattered glass as it spewed its way across the ward floor. Nurses ran to help and comfort us and I went back into my sleep. A boy of my age had been in the bed next to me on the other side of the French windows and when I awoke in the morning he was gone. His bed sheets had been pulled back and lay open, soaked red with blood.

Apart from the jubilation at its ending, my final sounds of war were on the day my mum and my aunt took me near to my father’s place of work. We walked along a pavement close to the Thames, along which stood a long row of soldiers. Some were smoking cigarettes; some were silent. Others were talking quietly, but some were crying. Tears streaming down their faces; these soldiers were sobbing loudly. Lowering their heads, my mother and aunt walked swiftly past to avoid giving embarrassment, whilst I, in childhood innocence, just stared in disbelief. I thought about it tor days afterwards, but could not understand why a  soldier would cry.

Just a dozen or so years after the war, I understood, because my own National Service, in a violence-ravaged Cyprus, taught me that soldiers are only men in uniform.