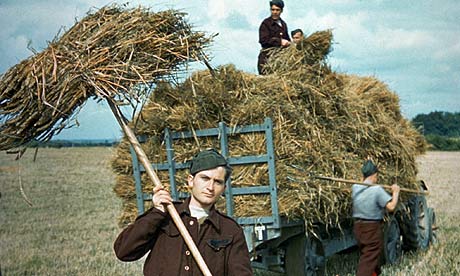 German POW working on the land in the UK (Not Canvey)

I was born in 1941 on Canvey during an air raid, apparently my Mother would not go into the air raid shelter after that experience again!!!!!.

We lived next to fields with a dyke and a pond and my best friend was David Ford in the same street. My grandad would come early most mornings with his black lab called nipper from his home in Atherton rd then walk for miles below the sea wall collecting wild mushrooms and spinach and return along the seawall and occasionally find wood or whatever floated in with tide.

I remember going cockling with him and seeing the tailend of German bomber sticking out of the sand. Behind our house was a caravan park, busy in summer time. I remember seeing German prisioners of war marching in column along Leigh rd under armed guards and also 100s of planes coming up the Thames returning from raids.

My dad returned from war and went out to East Africa on a govt project. My mum and I followed in 1947. We went to Northern Rhodesia in 1952. I have been back to Canvey on occasional visits to the uk and noticed the huge changes that have taken place over the many years.