You are here: HomenextHistorynextWartime CanveynextWWIInextThe Day we left for Suffolk

The Day we left for Suffolk 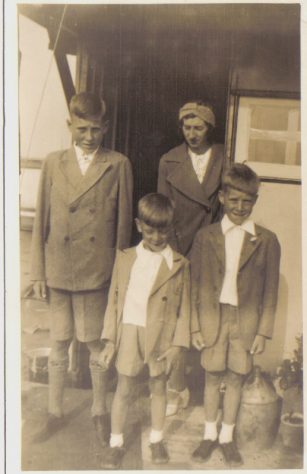 The day we left for Suffolk, our parents decided we should move after the V2 rocket landed on Two Tree Island on 7th November 1944 the blast smashed all the windows on our Houseboat.

It left a crater 60ft wide and 12ft deep and killed 3 cows, I had a piece of Shrapnel from it for many years. They were terrifying weapons all you saw was a vapour trail, at least with the V1 you could see and hear them, when the pulse jet cut out it gave you a chance to take cover.

I watched many V1’s going towards London chased by Spitfires, the pilots climbed then dived to gain speed to catch them and saw quite a few shot down, with a massive explosion, the Spitfires had to pull up rapidly to avoid the blast, we thought when we moved to Suffolk we would not see or hear much more of the war but we stayed at my Grandmothers house in Fressingfield near Diss, there was a American Airforce base 95th Bomber Group at Horam about 5 miles away, probably the same B17’s that use to fly over our Houseboat daylight bombing of Germany.

Horam which was a prime target for the Germans, bombed quite regularly.