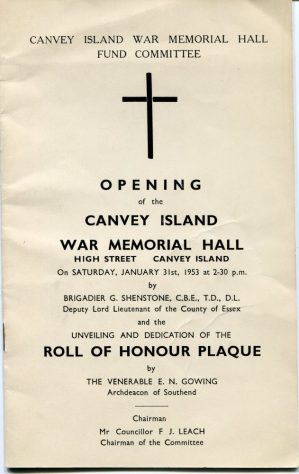 We have been very fortunate in obtaining an original copy of the programme for the opening of the Canvey Island War Memorial on the 31st January 1953. It is thanks to Nicky Pontius for lending us her father’s (Major R H Stevens M C.) copy from that fateful night when the War Memorial Hall was opened and the waters came rushing in (the floods of 1953). I would think it unlikely there are many copies about.

The programme not only tells us about the service but also about the origin and history of the fund that was set up to commemorate the dead of WW2. It also list the Committee members during those years as well as Canvey’s soldiers, sailors, airmen and civilians who died during that time.

A copy of the programme is in the gallery below but I have transcribed some of the more important parts for easy reading.

2. The Vice-Chairman of the Committee, Mr. County Councillor A. C. Mason, will present

4.  The Deputy Lord Lieutenant will declare the Hall open.

5.  The Archdeacon of Southend supported by the Vicar of Canvey Island will unveil and dedicate the Roll of Honour Plaque. 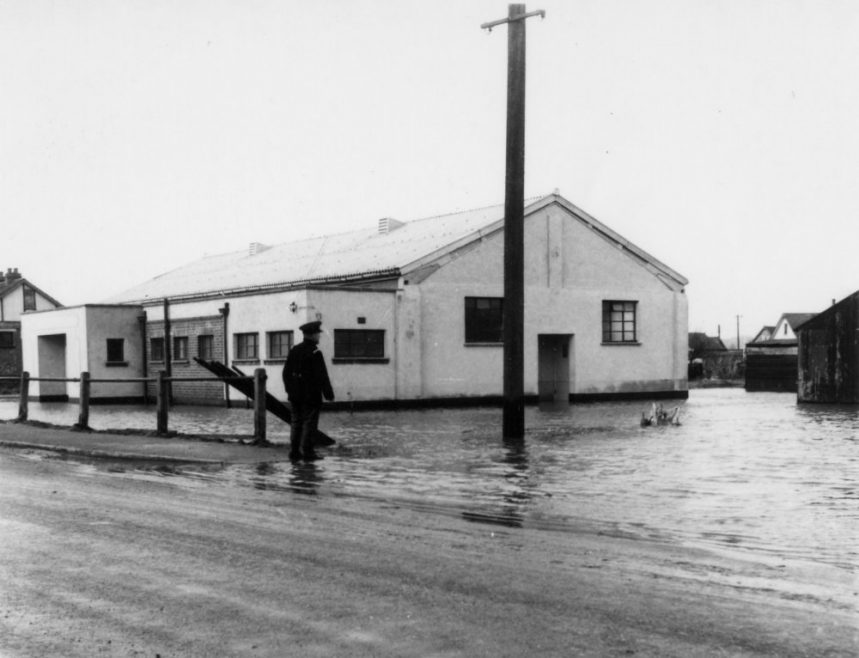 Then the Archdeacon shall unveil and dedicate the Plaque, saying

In the Faith of Jesus Christ and to the Glory of God we dedi­cate this Memorial Plaque in this War Memorial Hall. In the Name of the Father, and of the Son, and of the Holy Ghost. Amen.

O God of the Spirit of all Flesh, we praise and magnify thy Holy name for all Thy servants who have finished their course in Thy Faith and fear especially for Thy servants here commemorated, and we beseech Thee that, encouraged by their examples, and streng­thened by their fellowship, we also may be found meet to be partakers of the inheritance of the Saints in light ; through the merits of Thy Son Jesus Christ our Lord. Amen.

O Lord God, whose name only is excellent and Thy praise above heaven and earth We give Thee high praise and hearty thanks for all those who counted not their lives dear unto them­selves, but laid them down for their friends , beseeching Thee to give them part and a lot in those good things which Thou hast prepared for all those whose names are written in the Book of Life , and grant to us, that having them always in remembrance, we may imitate their faithfulness and with them inherit the new name which Thou hast promised to them that overcome; through Jesus Christ our Lord. Amen.

Now unto the King eternal, immortal, invisible, the only wise God, be honour and glory for ever and ever. Amen.

The Rev A. J. Mortimer will propose a vote of thanks to the Archdeacon of Southend and Clr Mrs. E. M. Fisk, J.P. will second.

The Origin And History Of The Fund

After the end of the War in 1945 the Chairman of the Canvey Island Urban District Council (F. J. Leach, Esq., J.P.) called a Public Meeting to consider the question of a War Memorial in respect of the 57 people from Canvey Island who lost their lives during the years 1939—1945 as a result of hostilities.

Various forms of memorial were discussed, and it was eventually decided that a hall would be the most appropriate.

The public at their first meeting appointed a Committee for a period of one year and each following year a committee was appointed by the public.

Mr Councillor F. J Leach, J.P., was appointed Chairman of the Committee, Mr Councillor A. C. Mason, Vice-Chairman and Mr. R. Whitley Honorary Secretary, and all have remained in office for the whole period the Committee have functioned.

The Committee reorganised the old Canvey Carnival and held an annual Carnival with the election of a Carnival Queen and Maids of Honour, processions of decorated vehicles, Baby Shows, Dog Shows, Dances, Whist Drives, etc.

Many people gave private donations and others donated prizes and Cups for the various events.

Mr. W C. Cole, a member of the Committee, donated £50 for a Roll of Honour Plaque in the Parish Church which was dedicated by the Bishop of Chelmsford on the 8th November, 1947

Mr. Cole also donated £50 for another Roll of Honour Plaque in the War Memorial Hall and £50 for the first brick for the Hall.

The Committee sought and received the support of the Essex Education Committee to an application to the Ministry of Education for a grant towards the cost of erecting and furnishing the Hall.

The Ministry gave a grant of £1,250, and also gave a grant of £65 towards the development charge of £240 , the land was purchased from Major M. Chance at the very reasonable figure of £100.

Major R. H. Stevens, M.C., Engineer & Surveyor to the Canvey Island Urban District Council, acted as Honorary Technical Adviser in the preparation of plans and supervision of the erection of the Hall.

Mr H. S. Thompson was the contractor and all credit is due to him for the fortitude he displayed in overcoming the many difficulties in obtaining materials for the construction of the Hall.

The plans for the original hall allowed for an extension of 20 feet for the stage and dressing rooms. As the limit of expenditure was £5,000 this portion has been left in abeyance and will no doubt be erected in the future as soon as sufficient funds are available.

A Trust Deed has been made and the Trustees are Councillor Mrs. E, M. Fisk, J.P., Mr. Councillor F. J. Leach, J.P., and Mr. R. Whitley. This Deed makes provision for a Management Committee for the Hall of 15 members to be appointed annually by the public.

It was only owing to the long and untiring efforts of all the helpers that it was possible for the money to be raised to defray the cost of building the Hall and the inhabitants of Canvey Island will forever be indebted to them. 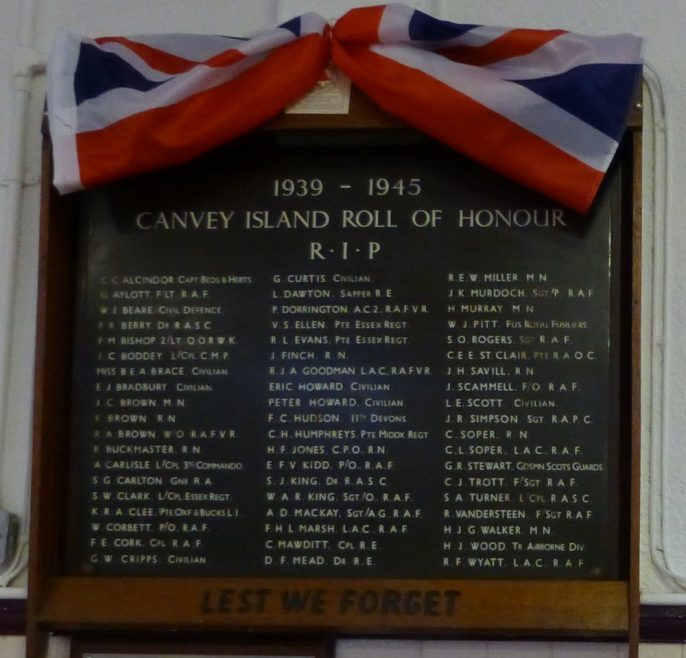 The Roll of Honour which hangs in the War Memorial Hall.

The hall is situated on a site in High Street at the junction with Gills Avenue, which road provides the access to the car parking space at the rear of the building.

The building consists of a main hall 75 ft. x 33 ft., entrance foyer, cloakrooms, kitchen and office and storage accommodation. The main hall is a precast concrete framed structure with rendered brick infilling, roof of corrugated asbestos lined with Insulation board and Block floor of Rhodesian Teak. Lighting by fluorescent units and heating by gas radiators. The building is designed to allow for an extension to provide a fixed stage at the Western end with dressing room accommodation. The principal Contractor is Mr H. S. Thompson of Canvey Island, and various sub-contractors and suppliers are as under : 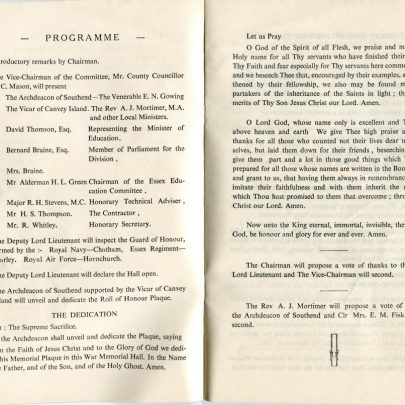 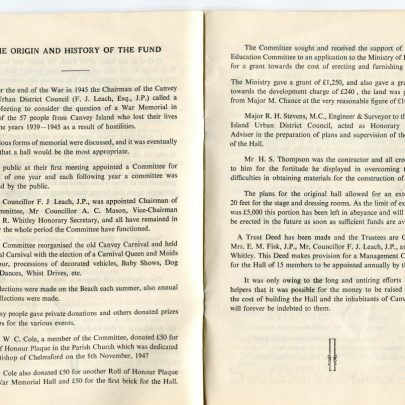 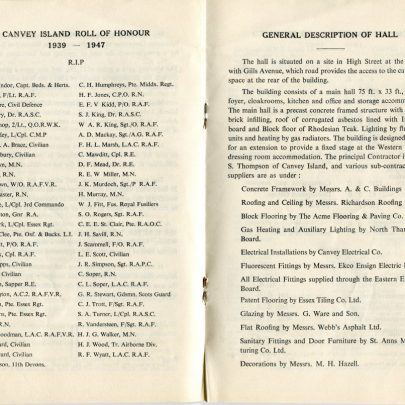 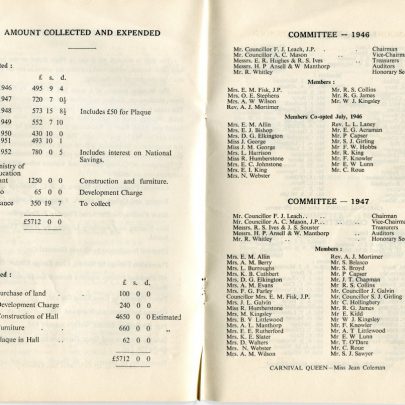 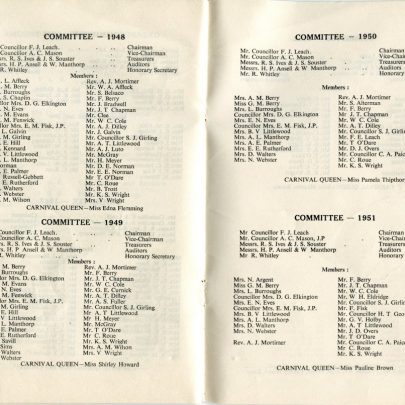 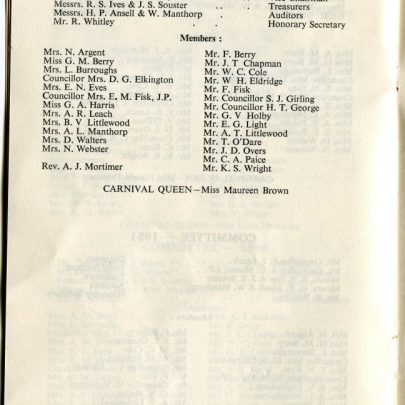