New information just sent to me by Chalky White

Just found a little bit more information on ML115. All other records I had found stated that the builders were unknown. However I have now found the following which just adds a little to the information on your ML.

Armament 1X3pdr 2X .303 ” AA [singles or twin]
Complement 16. Lot of small vessels had additional guns due to being given donations from various sources !!

The reasons a lot of the small boats having unknown ship builders was
because Fairmile made kits pre cut and shipped them out to boat builders for assembly all over the country.

The CO Lieutenant Deiter RNVR was quite a wealthy man and who knows perhaps he purchased, or won, some extra armament for 115. 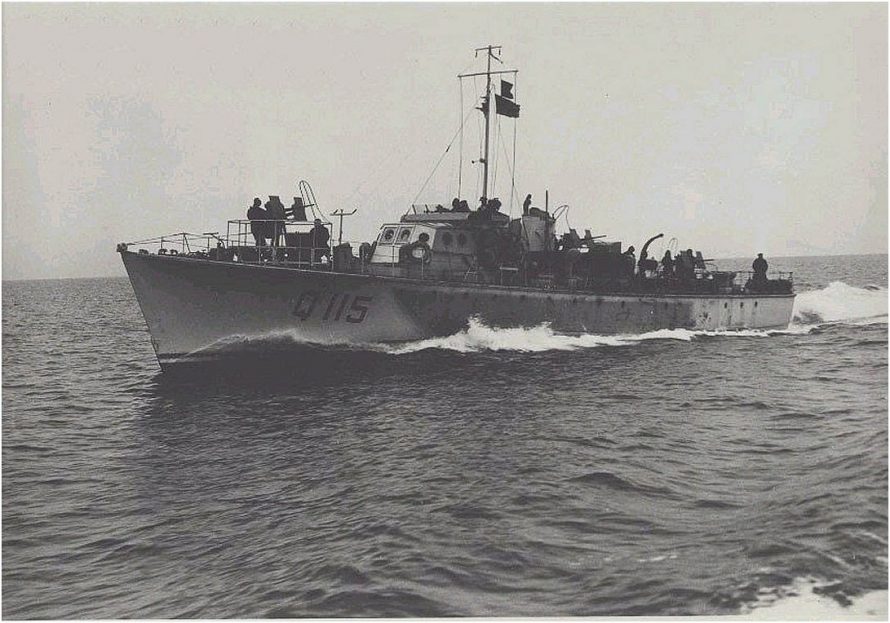 I also found this photo which prompted a bit more research in view of the Q. However apparently most, if not all, ML’s were taken in hand later in the war and improved with extra heavier armament, etc. It would be nice to know when 115 was taken in hand and where. It’s a pity that my contacts with the crew members I traced have passed as they have Crossed the Bar. One of them could possibly have answered these questions.When such improvements were made ML’s were designated with the Pennant letter Q.

It looks as if 115 is in company with another from which the photo was taken but all weapons are trained in this other ships direction!! Chap standing at the stern is in a precarious position!!! It’s a pity the photo does not clearly show which flags are flying on the mast. The larger of the two is probably the White Ensign but the smaller is at a guess, because the guns are manned, the red letter B for Bravo flag which means, ” I am taking in or discharging Explosives”.

Latest:
Recently recieved this from a reliable source. Unfortunately it looks like the late Chalky White was not right this time.

The launch Q 115 was a Canadian built and crewed vessel. One of the tell tale points are the round windows of the wheel house. Another is all Canadian ML were changed or fitted originally with 3 single 20mm Oerlikons as their main armament.