The week Canvey pulled out all the stops

What was Warship Week ? 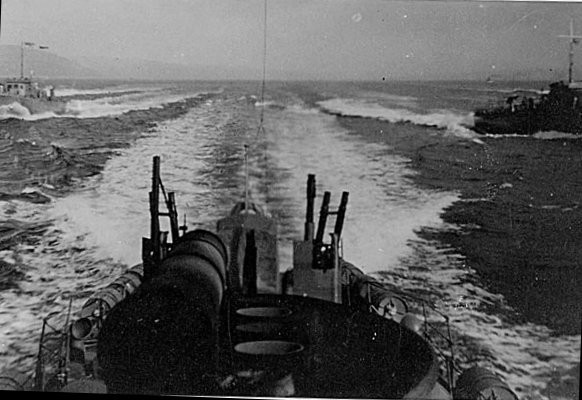 1941 through to 1942 saw whole communities across the country coming together to raise £955,611,589 for the war effort.  Referred to as ‘Warship Weeks’ this campaign of fund-raising ventures allowed a community to sponsor a naval vessel through individual investments in Government Bonds and National Savings Certificates.  Also through the Post Office Savings Bank, so that investments were recovered with 2 ½ to 3 % interest.  The weeks were organised by the National War Savings Committee and were fully supported by the Admiralty. There were 1,178 ‘Warship Weeks’ organised during the campaign, involving a total of 1,273 districts.  Each districts was set its own target appropriate to the size and affluence of its population.  A small village therefore needed to sponsor a motor launch.  Whereas a city could expect to reach the £2 m required for a battleship.  Where targets were exceeded, some areas were allocated additional ships.  A press announcement quoted the adoption of 8 battleships, 4 carriers, 49 cruisers, 301 destroyers, 25 submarines, 164 corvettes and frigates and 288 minesweepers.  The Coastal Forces’ MIBs, MGBs, and Motor Launches presumably made up the remainder.

To commemorate the campaign, the Lord Commissioners of the Admiralty, presented each district with a certificate and a small plaque.  Where possible the Commanding Officers of the adopted vessels would make the presentation.  The ensuing relationships between the districts and their respective ships varied greatly.  While some lost track immediately, others have maintained close links to this day.

In January 1942 a savings committee, chaired by Mr Roy G King, undertook a fund-raising drive- “Warship Week” – with the objective of purchasing a harbour defence craft. A target of £14,000 was set, based upon the population and wealth of the district.

The week was officially launched on 17th January by Flight-Lieutenant, Victor Raikes, the MP for South East Essex and opened with a procession in which all the local organisations, Civil Defence units and naval and military contingents took part. Various other events followed. On Thursday 22nd January, there was an hour’s free film show at the Woman’s Institute Hall, and on the front near the Monico, off-duty men from the Canvey Island, Hadleigh and Benfleet branch National Fire Service gave a fire-fighting display.  There was also a boxing tournament held at the Drill Hall in Runnymead Road on Thursday night.

That Thursday, early indications suggested a total of £10,000 had been collected and by mid day Friday the sum had risen to £13,000. But the final total was £29,280 19s 3d.  The hard work and generosity of the Canvey people had exceeded its objective by double.

The vessel allocated to Canvey Island for Warship Week was HMML 115 a motor launch with gun armaments. It was commanded by Lieutenant Oswald Birrell Dieter RNVR, an American who it has been suggested was the first to volunteer for service in the Royal Navy prior to the USA’s entry into the Second World War (entered RNVR on March 24th 1941 as a sub-lieutenant) 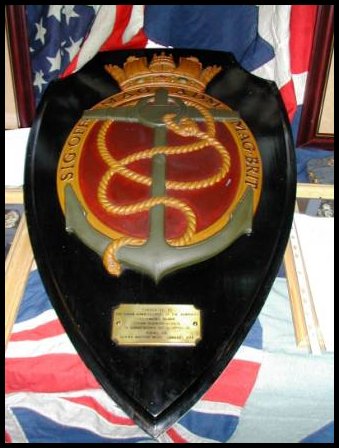 The Plaque presented to Canvey Island 1943

Friday, June 18th 1943 saw the success of Canvey’s Warship Week commemorated with an exchange of plaques. The exchange, which took place at the Canvey Council Offices, was attended on behalf of the Admiralty by Vice Admiral A L Snagge and Mr Roy King, Chairman of the committee responsible for holding Warship Week, was there to present the Admiralty Plaque to the urban district.  Lieutenant Dieter, P O Burchall, L Tomlinson, A B Shipwash, O Lewis and O S Mayes were present to receive on behalf of the ship the plaque provided by the local savings committee in exchange. The ceremony was officiated by the Rev R J Webb.

The ceremony saw an impressive parade which included contingents of the Civil Defence, A T C, A F S, W V S and five members of the crew of HMML115. After which Vice-Admiral Snagge introduced by the Chairman of the Council (Mr E Rayment) delivered an address to the people of Canvey, remarking that “by contributing £29,000 when their target was £14,000, the people of the Island showed they were awake to the necessity of supporting that sea-power on which, from the days of Elizabeth, the safety, honour and welfare of the country had chiefly depended”. 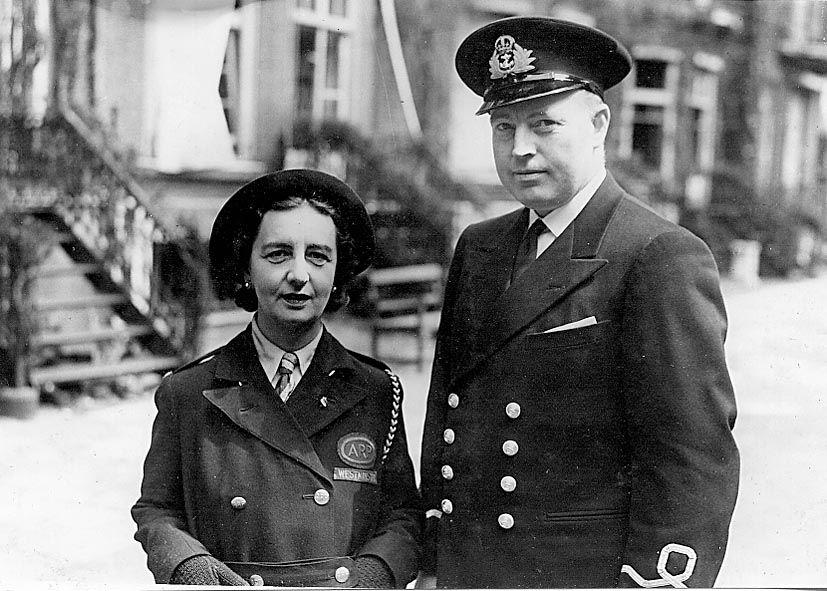 Lieutenant Dieter was loudly cheered during his own address referring to the people of Canvey as “Our Foster Parents”.  He concluded with words, “Memories of Canvey Island will go with the old girl (HM ML115) as long as she goes”.
Subsequently tea was served and later there was a dinner and dance at the Hotel Monico. There was also a civic dance that evening at the Cassino Ballroom.

I first heard about Warship Week and Canvey Island’s involvement when I received an email from Chalky White in 2001. Chalky was ‘engaged on a project to commemorate the Americans who volunteered for service in the Royal Navy prior to the USA’s entry into WW2’. Lieutenant Oswald Birrell Dieter RNVR the Captain of HM ML 115 was one of these Americans. Dieter was a successful Osteopath in London and according to some newspaper reports was believed to be the first American to join the British Navy in WW2. Chalky had photos and newspaper cuttings regarding Canvey and Warship Week and informed me that Canvey was presented with a plaque in 1943. It is thanks to Chalky White and David Thorndyke of the Heritage Centre that the plaque was found apparently in a cupboa  rd in the council offices at Kiln Road. In March of 2002 David was able to borrow the plaque with the details and photos supplied by Chalky and included them in an exhibition of Wartime Canvey at the Heritage Centre. After the exhibition the plaque was returned to the Council. It is a shame it is not here on Canvey where it belongs it is after all part of our heritage. Perhaps in the old Council offices or in the Paddocks. 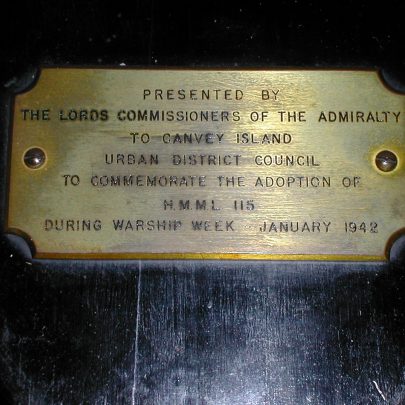 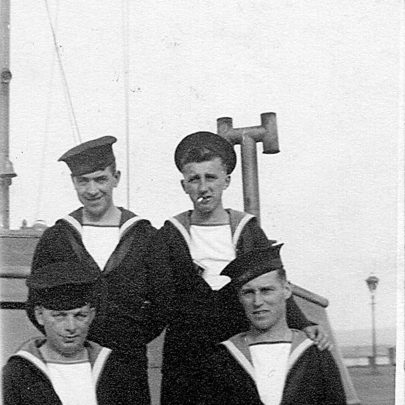 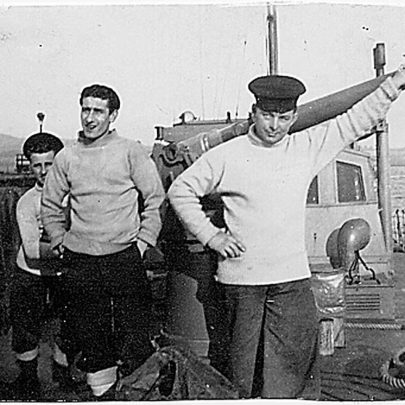 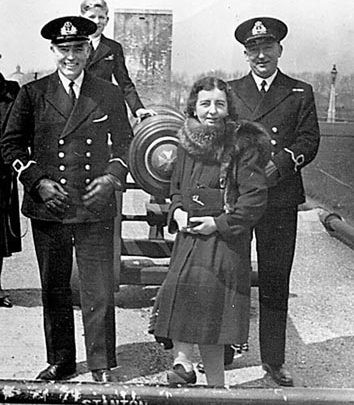 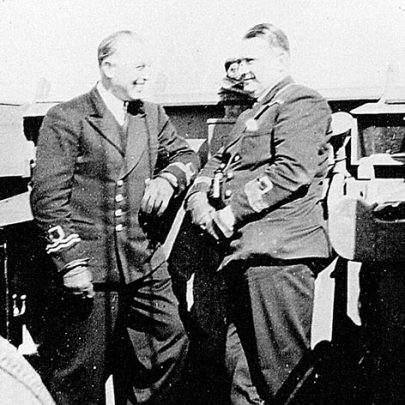 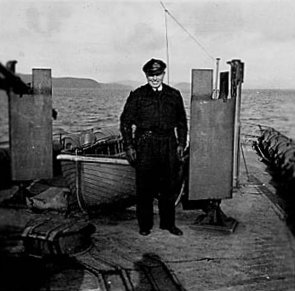 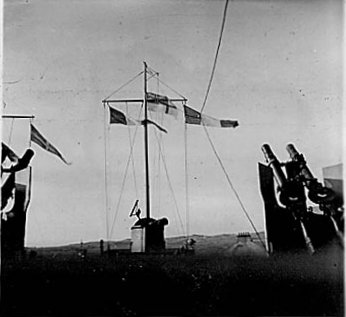 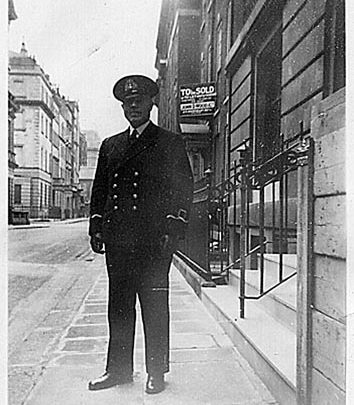 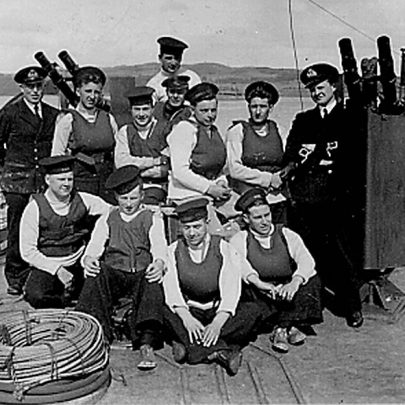 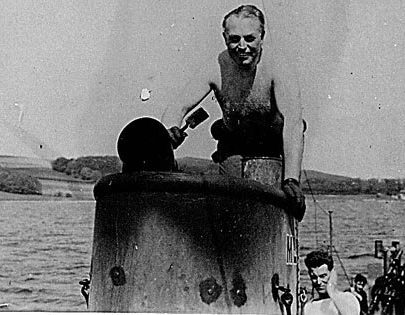 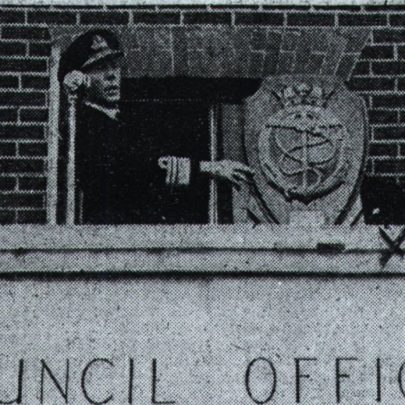 Exchange of plaques on the balcony of the Council Offices, Long Road, Canvey. Chairman of the Council Edward Rayment on the left next to Vice Admiral Snagg C.V.O
Chalky White

Closeup of the plaque
Chalky White 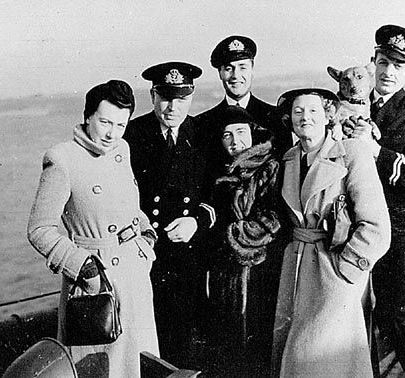